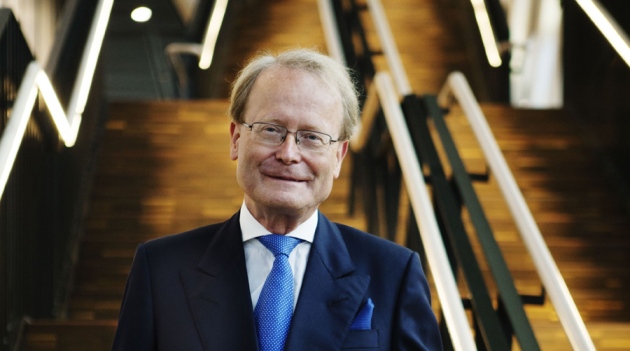 Anders Hamsten, who has resigned as vice-chancellor of the Karolinska Institute in Stockholm.

The vice-chancellor of the Karolinska Institute (KI) in Stockholm, Anders Hamsten, has resigned after acknowledging that he mishandled the prestigious Swedish institute’s investigation into controversial surgeon Paolo Macchiarini.

The institute will also reopen its misconduct inquiry into Macchiarini, it announced in a press release on 13 February, which accompanied an open letter by Hamsten in the Swedish daily newspaper Dagens Nyheter. The KI had already decided not to renew Macchiarini’s contract when it runs out in November.

Last August, Hamsten cleared Macchiarini after an external investigation found the surgeon had committed misconduct in seven research papers. But in his letter, Hamsten wrote that he had “completely misjudged” Macchiarini, who has been accused of research misconduct and ethical breaches in his work implanting artificial windpipes into patients.  “I failed to see the warning signs,” he wrote, adding that new information the KI had recently received meant that last year’s investigation should now be reopened. “There is much to indicate that the judgement reached by KI last summer should be amended to scientific misconduct, which in plain language means research fraud.”

Asked for comment by Nature, Macchiarini wrote that he could not respond to specific allegations at present, but that he is "trying to collect all the evidence that is required to demonstrate that all the allegations made against me — in a number of spheres — are false".

While the Macchiarini reinvestigation is going on, Hamsten and three other KI scientists have also decided to “refrain from participating” in any activities in the Nobel Assembly, a group of 50 Karolinska-based professors that decides who wins the Nobel Prize in Physiology or Medicine. Their decision was taken “out of respect for the integrity of the Nobel Prize work”, wrote the assembly's chairman, Rune Toftgård, who is a biologist at the KI. One of the four, geneticist Urban Lendahl, last week resigned from his position as secretary-general of the Nobel Assembly.

The announcements follow mounting pressure in Sweden for resignations at the KI over the way it has handled the case of Macchiarini, whom the institute hired as a visiting professor in 2010. In 2011, the surgeon reported in The Lancet his implantation of an artificial windpipe (trachea) into a patient at the Karolinska, using the patient’s own stem cells — an operation hailed as a landmark in regenerative medicine. He followed up with implants of tracheas into seven more people. (Six of the eight later died, for reasons unrelated to the surgery, Macchiarini says.)

In 2014, physicians at the KI argued that Macchiarini had misrepresented the success of his work in seven papers — six articles on his transplants in humans, and one reporting a proof-of-principle experiment implanting artificial oesophagi into rats. An independent report found the surgeon guilty, but Hamsten cleared Macchiarini of misconduct.

Last month, a television documentary aired by Sweden’s national broadcaster SVT made new accusations of ethical wrongdoings by Macchiarini. It alleged that he had conducted operations in Krasnodar, Russia, on at least one patient who was not life-threateningly ill — contrary to the surgeon’s previous statements — and that he had misrepresented the success of his prosthetic grafts in scientific publications.

That documentary drew fresh attention to the controversy and ultimately led the KI to dismiss the surgeon on 4 February, saying it had “lost confidence” in him. But Swedish scientists wondered why Hamsten had not paid more heed to the earlier independent investigation. “Even before the horrifying TV broadcasts on this matter, many of us were stunned by the fact that the institute dismissed the well-argued conclusions put forward by their own external reviewer,” Elias Eriksson, a neuroscientist at the University of Gothenburg, Sweden, told Nature.

In his letter in Dagens Nyheter, Hamsten said that the KI did not have complete information when it first investigated the surgeon. He and the KI said — without providing further details — that in the past few days they had received new information about what happened to Macchiarini's first patient after his surgery, based in part on images shown in the Swedish documentary.

In its press release accompanying Hamsten’s letter, the KI says that an additional two papers concerning research on rats will be investigated, based on a new report of scientific misconduct. The articles contain images that are very similar and lead to suspicions "that data published in those publications are incorrect”, says Jan Carlstedt-Duke, an endocrinologist at the KI who also acts as an adviser to its vice-chancellor.