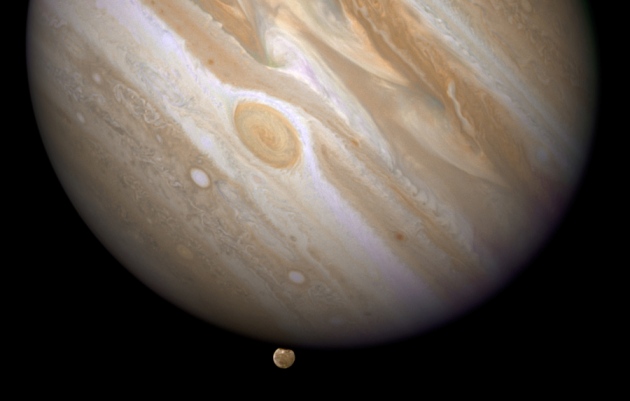 Researchers analysed light that bounced back from Ganymede — seen here nearly disappearing behind Jupiter in a Hubble Space Telescope image — after filtering through the Jovian atmosphere.

Astronomers have observed Jupiter for centuries. But a study that looks at the gas giant as if it were an exoplanet could help to make more reliable interpretations of the atmospheres of bodies orbiting stars hundreds of light years away1. The results largely confirm the conventional picture of Jupiter, but also reveal some surprises — including clouds of ice crystals previously unheard of on the planet.

The hundreds of planets now known to orbit stars other than our own are almost never directly visible in telescopes. In a handful of cases, however, astronomers have been able to learn about their make-ups, by interpreting how starlight filters through their atmospheres as it skirts the planets while they cross between their parent stars and Earth.

But low resolution and experimental noise mean that such results, which are usually only possible for large planets orbiting bright stars, are often disputed2. “The models give us answers, but we don’t always know if we can believe those answers or not,” says Tyler Robinson, an astronomer at NASA’s Ames Research Center near Mountain View, California.

Now astrophysicist Pilar Montañés-Rodríguez at the Astrophysics Institute of the Canary Islands in Tenerife and her colleagues have devised a way to apply the idea to studying Jupiter. The technique used for exoplanet atmospheres does not immediately translate to Jupiter, because its orbit never takes it between Earth and the Sun. So, instead of looking directly at sunlight filtered through Jupiter’s atmosphere, the team analysed light reflected back from the Jovian moon Ganymede when Jupiter passed between it and the Sun — in other words, when the planet partially eclipsed the Sun as seen from Ganymede. 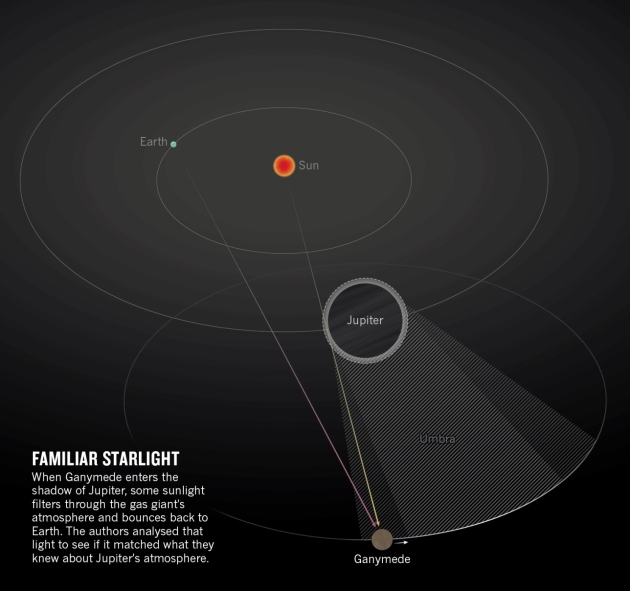 By examining the absorption and emission of light passing through Jupiter’s atmosphere at different wavelengths, seen with the European Southern Observatory's Very Large Telescope in Paranal, Chile, and the William Herschel Telescope at the La Palma Observatory in Spain's Canary Islands, the team built up a picture of the chemical make-up of the Jovian atmosphere.

That spectrum shows that Jupiter is a methane-rich planet wrapped in a layer of cloud that scatters light and makes it harder to see more detailed composition. Both findings agree with direct observations, says Enric Pallé, a colleague at the Astrophysics Institute of the Canary Islands and a co-author on the paper, which was posted on the pre-print server arXiv on 7 February1.

Comparing the spectrum of that light with what astronomers already know about the gas giant gives scientists a ‘Rosetta Stone’ for translating results about distant alien worlds, says Montañés-Rodríguez.

“It’s an extremely clever idea and spectacularly carried out,” says Sara Seager, an astronomer at the Massachusetts Institute of Technology in Cambridge.

The findings should boost astronomers’ confidence that similar hazes found on many of the exoplanets whose atmospheres have been studied so far are real and not due to a confounding effect, such as activity on the parent star, he says. These clouds often obscure other elements, and dissecting the results on Jupiter could help astronomers to tease more out of existing spectra, Pallé adds.

A surprising detail that emerged from the study was that Jupiter’s upper atmosphere includes a layer of ice crystals. Pallé says that this finding will probably prove controversial because the planet is known to have very little water vapour, but he suggests that comets could have deposited the water at some point in the planet’s history. The authors also found traces of sodium on Jupiter, which they similarly attribute to comet debris, or possibly to the result of matter flowing into the planet from the atmosphere of another moon, Io.

That Jupiter viewed in this way does not appear the same as in direct observations — its spectrum does not show its swirling clouds of ammonia in the lower atmosphere that are visible in reflected light, for example — is not a failure of the method, notes Seager. But it does show that “each technique tells you something different”, she says.

In 2009, Pallé’s group used a similar technique to study Earth during a partial lunar eclipse, by analysing the light filtered through its atmosphere and reflected back from the Moon3. The group plans to do the same with other planets in the Solar System.