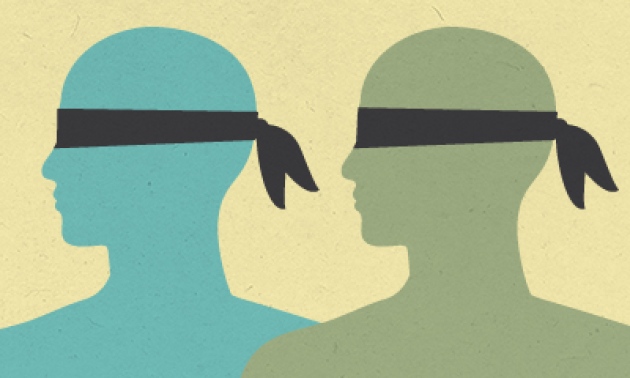 Evaluating research papers without seeing the authors' names could reduce the effects of conscious or subconscious bias.

In efforts to increase fairness in science publishing, some journals are experimenting with the idea of ‘blinding’ reviewers to the identity of the authors.

Some researchers have long worried that manuscripts submitted for publication are judged not on the quality of the work but on the reputation of the author submitting it. Although authors are rarely told who is reviewing their work, reviewers generally are informed of whose papers they are evaluating.

But last week an article in Conservation Biology1 revealed that journal would be considering ‘double blind’ peer review — in which neither the reviewer nor the reviewed knows the other’s identity. Double-blind peer review is common in the humanities and social sciences, but very few scientific journals have adopted it.

Mark Burgman, a biologist at the University of Melbourne in Australia and editor-in-chief of Conservation Biology, says that the journal has been exploring the possibility since last year and found that it has “overwhelming support”, especially among younger and minority scientists. The journal’s editors now plan to discuss the move with the board and with the broader membership of the Society for Conservation Biology, which owns the journal.

“If we do it, we expect it will be permanent, and that the change will take place over the next 12 months,” Burgman says.

Emily Darling, a marine conservation researcher at the University of North Carolina at Chapel Hill, points out that unconscious biases have been shown in many instances to lead to discrimination against women. In one study2, otherwise identical CVs were ranked higher by tenure-track academics if they came with male names than if they came with female names.

“I’m really not pointing the finger,” says Darling, who wrote the new Conservation Biology article. “We all hold biases.”

Double-blind peer review has the potential to get more women and minorities into top-level jobs in science, where they are heavily underrepresented. As appointment to such roles often depends on a strong academic publication record, removing potential biases against women from scientific publishing could be a contribution, says Darling.

One criticism of double-blind reviewing is that in many cases reviewers will be able to guess who the authors are, owing to the high specialization that science research usually involves. But supporters say that although this is inevitable in some cases, in others the guesses will be wrong, and that the element of doubt increases fairness.

Philip Campbell, editor-in-chief of Nature and Nature-branded journals, says: “There is a widespread concern out there that referees may be biased by the authorship of a paper.”

But Campbell adds that it is too early to evaluate the trials under way at these two journals, and that there is little evidence that a change from the current system to a double-blind one would alter what is published.

By December 2013 only around 15% of authors submitting to the Nature Geoscience had chosen double-blind review and around 22% in Nature Climate Change, although many readers had expressed support for it. The authors of the editorials reporting this figure suggested3 that the discrepancy may be down to the fact that many authors were not aware of the option at the start of the process or were concerned for example that editing the paper to remove all identifying information could delay their submission.

“We have had huge interest from people to see how it’s going. Our editorial announcing this was one of our most read,” says Heike Langenberg, chief editor of Nature Geoscience.

Alastair Brown, associate editor at Nature Climate Change, says that the journals are investigating what authors and referees think about the possibility of indicating how each paper published was reviewed, and whether this reflects well on papers that underwent double-blind review.

Support for double-blind reviewing seems to be growing. “It makes the review process a bit more scientific,” says Brown. “Removing the opportunity for subconscious bias is a good thing.”