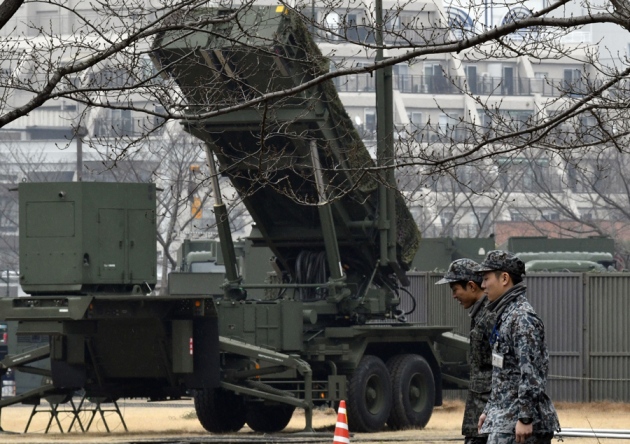 According to some critics, Japan's dual-use research programme is part of a government plan to boost weapons exports.

The Japanese science community is pushing back against government attempts to enlist academic scientists into research with possible military applications.

The Science Council of Japan, an advisory body to the cabinet, representing some 850,000 Japanese scientists, released a statement on 24 March calling on scientists to boycott military research and for universities and research organizations to evaluate the threats posed by such work. Since the end of the Second World War, Japan has remained staunchly pacifist.

The council’s statement comes as Japan’s government has dramatically increased funding for a programme through which scientists can apply for grants covering 'dual use' research: the development of technologies for civilian or commercial purposes, but which could also have a military use. The programme’s budget was ¥300 million (US$2.7 million) when it launched in 2015, before doubling the next year. In the financial year starting in April 2017, spending will balloon to ¥11 billion to cover projects to be selected in August.

The programme is run by the defence ministry's Acquisition, Technology and Logistics Agency (ATLA). Last year, it funded a range of projects, including research on new lasers, on micro-bubble coatings to reduce friction on ships, and on films for cloaking devices.

Yuko Ito, a science-policy expert at the Japan Science and Technology Agency, thinks that the programme was established partly in response to rescue efforts following the Fukushima nuclear disaster in 2011. Problems arose, for example, when Japanese robots were unable to function in the highly radioactive conditions.

But Morihisa Hamada, a geochemist at the Japan Agency for Marine-Earth Science and Technology in Yokohama, sees a more nefarious driver — the economic policies of Prime Minister Shinzo Abe, known as Abenomics. In 2014, as part of a move to boost the economy through deregulation, Abe's party dropped the country’s ban on exporting weapons. “Enlisting the cutting-edge technology of universities and research institutes to produce military arms more cheaply and then sell them abroad is part of the Abenomics growth strategy,” says Hamada.

Neither Hamada nor Takashi Onishi, president of the Science Council of Japan, take issue with specific projects funded in the programme’s first two years. But the council is concerned that grant winners are selected by defence-ministry officials, without any external committee. The dual-use programme will ultimately impinge on “the freedom and autonomy of scientific research”, its statement says.

Atsushi Sunami, a science-policy researcher at the National Graduate Institute for Policy Studies in Tokyo who has advised the government and military on science and technology matters, says that ATLA wants to ensure that the researchers funded by the dual-use programme can stick to basic research and publish their findings — but has not clarified how it will achieve such openness. Sunami says he has suggested to the government that they bring in outside experts to design and operate their programme.

More than a dozen universities, including the University of Tokyo, Nagoya University and Waseda University, have charters, guidelines or presidential decrees that forbid or dissuade researchers from accepting dual-use grants, notes Hamada, who has attempted to organize resistance against the programme since its launch.

Some, including the University of the Ryukyus, Niigata University, Tohoku University and Kyoto University, have announced such policies in the last two years with specific reference to the defence ministry’s dual-use programme. Hamada says the council’s statement should put even more pressure on universities to avoid dual-use research.

It seems that individual scientists are voting with their feet, too, says Hamada. There were 109 applicants for the programme in 2015, but only 44 in 2016. “We helped to get the word out about the dangers of military-academic research,” he says. “The spirit of peace is strongly rooted in our society.”

Yet critics of dual-use research will face an uphill struggle, says Sunami. Cash-strapped universities need new sources of funding, and university researchers are already working closely with companies that are in business with the defence ministry. “Today’s science cannot be separated completely from dual-use technology,” he says. “It’s a global trend.”