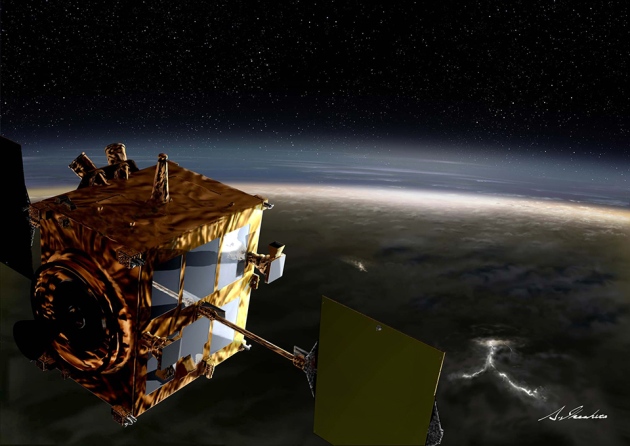 The Akatsuki orbiter waited five years for another try at reaching Venus orbit.

Update, 9 December: The Japan Aerospace Exploration Agency (JAXA) says that Akatsuki is travelling an elliptical orbit around Venus, completing a circuit around the planet once every 13 days and 14 hours. The spacecraft is roughly 440,000 kilometres from Venus at its farthest point. JAXA will gradually reduce Akatsuki's orbit to roughly 9 days before full operation of the spacecraft begins in April 2016. The space agency has confirmed the good functioning of three of Akatsuki's instruments and will test another three in the coming months.

Japan’s Akatsuki spacecraft has entered orbit around Venus, five years after its first attempt failed. On 7 December, at 8:51 a.m. Japan time, Akatsuki ignited four small thruster engines for roughly 20 minutes. The tiny push was enough to nudge the probe into the pull of Venus’s gravity.

As Nature went to press, exactly what that orbit looks like remained unclear. But mission scientists are confident that the spacecraft has at least partly redeemed itself, after a 2010 attempt to reach Venus left Akatsuki spiralling around the Sun.

“It’s in orbit!” said Sanjay Limaye, a planetary researcher at the University of Wisconsin–Madison, and a participating scientist on the mission. “Everyone is very happy.” 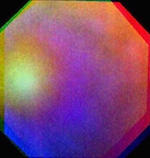 Why the 'Venus rainbow' is actually a glory

The Japan Aerospace Exploration Agency (JAXA) plans to announce the exact details of the orbit at 6 p.m. Japan time (9 a.m. London time) on 9 December. Even the best-case scenario would see Akatsuki travel a much more stretched-out orbit around Venus than originally planned. The spacecraft could range about 500,000 kilometres from the planet at its farthest point, taking perhaps 14 or 15 days to make each orbit. Eventually, mission controllers plan to fire the thrusters again to shrink the orbit further — to about 330,000 kilometres at its farthest point. That would see it completing a circuit around Venus about every 8 days.

“It’s been quite a long period of waiting,” says Masato Nakamura, JAXA project manager at the Institute of Space and Astronautical Science in Sagamihara.

Akatsuki was launched in May 2010 on a mission to study Venus’s ever-changing atmosphere, which rotates at up to 100 metres per second — much faster than the planetary surface below it. The spacecraft carries five cameras, ranging from infrared to ultraviolet wavelengths, to study different atmospheric features, including the lightning that is thought to flash through Venus’s acidic clouds.

All seemed well until 7 December 2010, when the spacecraft fired its main engine to enter Venus’s orbit. Unknown to mission controllers, salt had built up on a valve between a helium tank and a fuel tank, and the blockage caused a ceramic nozzle in the propulsion system to break. Akatsuki went sailing towards the Sun, rather than into orbit around Venus.

JAXA engineers spent years studying whether they could recover the mission (M. Nakamura et al. Acta Astronaut. 93, 384–389; 2014). With the main engine dead, the oxidizer fuel was also useless, so mission controllers dumped 65 kilograms of fuel into space in October 2011. This made the spacecraft lighter and easier to manoeuvre, which enabled it to reach orbit with less thrusting.

The crucial engine burn involved four of the spacecraft’s eight thrusters. These smaller engines are normally used to make minor adjustments to the probe’s orientation, rather than major changes to its trajectory. Because the thrusters are lower power than the main engine, they needed to burn for longer than usual.

Despite the rescue’s apparent success, the spacecraft’s unexpected detour might still cause problems. Because it has spent more time closer to the Sun than originally designed, Akatsuki is warmer than expected, which may have harmed some of its equipment; this could limit operations at Venus.

“Akatsuki is scientists’ only chance at seeing the planet up close for the foreseeable future.”

During its five years in deep-space wilderness, Akatsuki conducted a little science, such as transmitting radio signals to Earth through the solar corona to measure how the Sun’s turbulence scatters radio waves (T. Imamura et al. Astrophys. J. 788, 117; 2014). “The past five years have been a tough period for us,” says team member Takeshi Imamura.

Akatsuki is scientists’ only chance at seeing the planet up close for the foreseeable future. The European Space Agency’s Venus Express spacecraft stopped working a year ago, after eight years of circling the planet. “The new observations from Akatsuki will both extend and complement the data we have from Venus Express, so the scientific result of the two together will be more than the sum of the two individual missions,” says Håkan Svedhem, project scientist for Venus Express. NASA has put two Venus probes on its shortlist of five candidates for the next Discovery-class mission, which would launch no earlier than 2020.

JAXA has a history of nail-biting second chances. Its Hayabusa spacecraft survived a number of near-fatal incidents on the way to and from the asteroid Itokawa. But in 2003, after an extended effort to make the mission work, JAXA lost its Mars-bound Nozomi spacecraft, first to a problem with a fuel valve, and then to a solar flare that fried its electronics.

Akatsuki’s move is only the second such deep-space recovery. In 2000, NASA’s Near Earth Asteroid Rendezvous spacecraft made it into orbit around the asteroid Eros after a first missed attempt in 1998.

Updated with new information from JAXA about Akatsuki's orbit and the agency's plans for the spacecraft.