As Europe and the United States struggle through the worst economic crisis in decades, Japan has emerged as the great hope for the future of particle physics. An international consensus is rapidly forming that the island nation is the only possible host for the International Linear Collider (ILC), a multi-billion-dollar machine that will sustain the next generation of researchers.

"Japan is it," says physicist Barry Barish, the head of the global design effort for the ILC.

At a ceremony in Tokyo today, Barish and other members of the ILC team will hand over the finalized design of the ILC to an independent committee of researchers. The blueprint is for a 31-kilometre-long track of superconducting cavities that can accelerate particles to energies of up to 500 gigaelectronvolts before colliding them. The energy of the collisions should provide a brief glimpse of heavier particles, which would then quickly decay inside one of two detectors.

It is a similar approach to that used at the world's current leading particle accelerator, the circular Large Hadron Collider (LHC), located at CERN, Europe's particle-physics facility near Geneva in Switzerland. Earlier this summer, researchers at the LHC discovered the Higgs boson, a central part of the mechanism that endows other particles with mass. But the LHC's view of the Higgs is obscured by the fact that the collider uses protons — composite particles that are made up of quarks — which produce a messy spray of debris. The ILC would use electrons and anti-electrons, which are fundamental particles and would give a much cleaner Higgs signal.

But the ILC would be enormously expensive. With a projected cost of between US$7 billion and $8 billion, the project has struggled to gain support from governments. The global recession has meant that even the money needed for research and development to finalize the design has been tight (see 'Accelerator plans stalled after US and UK cuts'). "Without international commitment, it's not going to go forward," Barish warns.

Enter Japan. The nation has been hungry for a world-class international science project ever since it lost out to France in the bid to host the €13-billion (US$17-billion) prototype fusion reactor ITER in 2005. Last year's earthquake and tsunami led to a glut of reconstruction funding, some of which could go towards a scientific project such as the ILC. On top of that, the scientific case for the collider has been strengthened by the observation of the Higgs boson at the LHC. 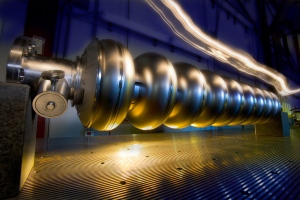 The 16,000 superconducting cavities of the ILC will accelerate particles to extreme speeds.

Scientists and engineers in Japan are conducting extensive studies of two sites: one in the Tohoku region that was struck by the tsunami and the other in Kyushu, in the south of the country. Rather than burying the collider beneath level ground, the Japanese would bore deep into a mountainside to accommodate it. That's "technically completely different than what we were looking at", says Barish. Several aspects of the design would have to change to fit that set-up, but he nevertheless thinks it is feasible. "Both sites would be excellent sites for an accelerator," he says.

The broad political support reflects Japan's desire to play a more collaborative role in the global scientific community, says Satoru Yamashita, a physicist at the University of Tokyo who has been involved in developing the Japanese bid. Being home to "a genuine global project is one of the most important issues for Japan", he says. "ILC could be a model case."

But Yamashita is quick to add that Japanese support for the collider is by no means assured. The country has never attempted an international project of this magnitude and it lacks a formal process for approving the large sums of money needed for construction. “We need to have an expression of interest from other scientific communities around the world to persuade the government to go forward,” adds Yasuhiro Okada, a trustee at KEK, Japan's particle-physics laboratory in Tsukuba.

Barish says that there are no competitors on the horizon, and Europe will be busy for a decade or more collecting data from the LHC. Lyn Evans, an accelerator physicist who led the construction of the LHC and will take the helm of the ILC collaboration next month, adds that “if a linear collider is approved in Japan, I am sure that Europe will contribute at some level”. After all, “Japan made a substantial contribution to the LHC”.

The United States may be more reluctant to participate, says theoretical physicist Jonathan Bagger, the head of the independent committee overseeing the ILC design process. The country's modest particle-physics resources are currently devoted to a programme of neutrino research at Fermilab in Batavia, Illinois, and the present budget would not allow a significant contribution to the ILC. “But with international investment at Fermilab, and some new resources put in to the field, there could well be a way to do both,” he says. “In the end, I am hopeful that the international-diplomacy aspects of the project will attract the [US] government's interest and increase its level of support.”

Yamashita remains hopeful. If a global consensus can be reached within the next three years, construction could begin in Japan by the end of the decade. That would leave particle physicists with a clear agenda for the coming years. But if a path forward cannot be found in Japan, Barish warns, the outlook is bleak. "It's either Japan or it's going to be on the shelf for a while," he predicts.