Solar fields such as this one near Tokyo will fill only part of the energy gap if Japan abandons nuclear power.

It’s official: nuclear power will have a much smaller role in Japan’s energy future than was once thought. Since the meltdowns and gas explosions at the Fukushima Daiichi nuclear power station in March 2011, all of Japan’s remaining reactors have been shut down for inspections and maintenance. Last week the government offered a glimpse of their future, and that of the country’s nuclear power in general, when it published an outline of four ways to satisfy Japan’s future energy demands. One scenario recommends using a market mechanism to determine the nuclear contribution. Under the other three, nuclear power would supply at most one-quarter of Japan’s energy by 2030 — and in one case, none at all.

The scenarios come from a 25-person advisory committee to the industry ministry. The committee has been meeting since last October to discuss revisions to the 2010 Basic Energy Plan, which had proposed that nuclear energy would generate 45% of the country’s electricity by 2030. The sharp reductions in that proportion mean that Japan will struggle to reach the 31% reduction in carbon dioxide emissions that it had planned by 2030; three of the new scenarios post more modest targets of 16%, 20% or 23% (see ‘Energy seesaw’). A fifth plan included a heavier dependence on nuclear power (35%), enabling greenhouse-gas reductions of 28%, but committee head Akio Mimura, president of Nippon Steel based in Tokyo, said that he had made the “heartbreaking” decision to discard that option because of popular opposition to nuclear energy. 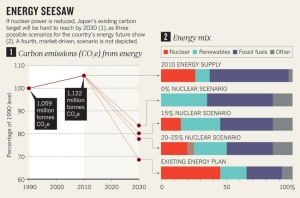 Before Fukushima, Japan’s energy plans depended on an ambitious expansion of its nuclear capacity, which accounted for 26% of the country’s electricity in 2010. That plan faced opposition before the disaster (see Nature 464, 661; 2010) and is now all but dead, with local governments blocking efforts to restart existing plants. Some prefectures, including Fukushima, hope to use renewable energy sources to become self-sufficient without reliance on nuclear energy. Toru Hashimoto, mayor of Osaka, has used his opposition to restarting the reactors to become, according to polls, the country’s most popular politician. Some tip him to be the next prime minister.

Given that opposition, Tetsunari Iida, director of the Institute for Sustainable Energy Policies in Tokyo, says anyone with sense would forget nuclear power. “Advocates of nuclear have no idea of reality check. They just keep repeating, ‘we can do it’,” says Iida, who advises Hashimoto on energy.

The nuclear-free plan calls for renewable energy sources including wind and solar to provide 35% of Japan’s electricity in 2030, up from 11% now. Iida, a member of the committee and a supporter of the plan, says that the goal is achievable. Solar capacity has been growing quickly since 2009, with a feed-in tariff allowing people with solar panels on their homes to sell energy back to the grid at a premium price. A similar subsidy for industrial solar plants will come into effect on 1 July, and companies including Kyocera, a Kyoto-based solar-technology manufacturer, are developing ‘megasolar’ farms. Iida expects to see an extra 3–5 gigawatts of solar capacity over the next year.

But many consider an over-reliance on renewables to be expensive and unrealistic. The no-nuclear scenario could reduce the country’s gross domestic product by up to ¥31 trillion (US$396 billion) per year, according to the committee. Some local government officials, including Hashimoto, have begun to soften their position on nuclear energy in a bid to protect jobs, and two reactors in Fukui prefecture look set to be restarted.

Tatsujiro Suzuki, vice-chairman of the cabinet-level Japan Atomic Energy Commission, admits that it will be “very difficult” to sell the country on nuclear energy again. He says the government must first prove that Fukushima is safe and that contamination from the disaster poses no threat, and then put in place new regulatory bodies. The government has decided to replace the industry ministry’s tainted Nuclear and Industrial Safety Agency, which has been criticized as too close to industry, with an independent nuclear regulator. “Trust has been damaged. We have to rebuild it,” says Suzuki.

But he recognizes that no new reactors are likely to be built in the next two decades. Without them, Japan would need to use some of the existing reactors past their intended 40-year life spans to reach the scenario in which 20–25% of power is nuclear. That would not be popular in a country skittish about nuclear safety.

The most likely option now seems to be the 15%-nuclear scenario. Under current estimates of future demand, that is roughly what nuclear energy would produce in 2030 if current reactors are restored to service, then retired as they reach 40 years.

The cabinet-level Energy and Environment Council will consider the four scenarios over the summer. It will also weigh advice from the Japan Atomic Energy Commission on whether to consign nuclear waste to permanent storage or persist with another pre-Fukushima goal: to develop reprocessing facilities that recycle nuclear waste into fresh reactor fuel.

Iida is happy that energy efficiency and renewable energy sources play a big part in all of the scenarios, but he is not convinced that the popular opposition to nuclear power will be fully reflected in the policy that emerges. “This country is not so democratic,” says Iida.