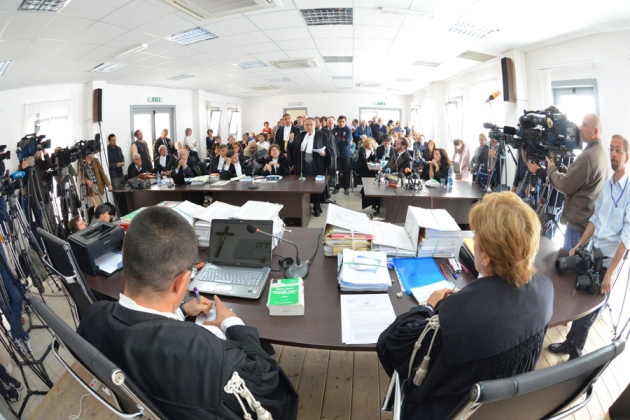 Lawyer Franco Coppi (centre) defended the former director of Italy's National Earthquake Centre in the 2012 trial and is now representing him in the appeals proceedings.

The six Italian scientists and one government official who were convicted of manslaughter in relation to statements they made before the 2009 L'Aquila earthquake in Italy are back in court to appeal the ruling.

The guilty verdict was based on the judge's view that their “superficial and vague risk evaluation” contributed to the death toll of the quake, which hit the city in April 2009. After a 13-month trial that garnered international attention from the media and scientists alike, the seven were sentenced on 22 October 2012 to six years in prison, and were permanently banned from public service (see 'Italian court finds seismologists guilty of manslaughter').

The appeal began on 10 October and is expected to be unusually quick by Italian standards. The three-judge court says that it wants to wrap up the proceedings by the end of the month or by early November at the latest.

On 31 March 2009, after four months during which residents of L'Aquila had been unnerved by a series of small earthquakes, the seven men took part in a meeting of the major risks commission, an expert group that advises the Italian government. According to the prosecution, the meeting resulted in a reassuring message — conveyed through local and national media — that convinced L'Aquila citizens that no strong earthquake could happen in the following days.

The prosecution says that when the magnitude-6.3 earthquake struck on 6 April 2009, 29 people who might have otherwise fled decided to stay in their homes on the basis of that reassurance, and were killed when their houses collapsed. The judge said that the message of the meeting contributed directly to the deaths of those 29 people in particular, out of 309 who lost their lives in the quake.

The seven defendants are Bernardo De Bernardinis, now president of the Institute for Environmental Research and Protection (ISPRA) in Rome, and deputy head of the Italian Civil Protection Department at the time of the earthquake; Enzo Boschi, former president of the National Institute of Geophysics and Volcanology (INGV) in Rome; Giulio Selvaggi, former director of the INGV's National Earthquake Centre in Rome; Franco Barberi, a volcanologist at the University of Rome 'Roma Tre'; Claudio Eva, a professor of Earth physics at the University of Genoa; Mauro Dolce, head of the seismic-risk office of the Civil Protection Department in Rome; and Gian Michele Calvi, director of the European Centre for Training and Research in Earthquake Engineering in Pavia.

All seven rejected the accusations. (Nature criticized the ruling in an editorial.) Seismologists Boschi and Selvaggi say that they never made any reassuring statements, and point to the seismic-risk maps that they brought to the meeting, which clearly marked L'Aquila as a high-risk area.

Unlike the first trial, in which dozens of citizens and experts appeared as witnesses, the appeal is an affair mostly between the judges, the public prosecutor and the defendants' lawyers. The key points are still the same: whether the defendants did explicitly reassure the population; and whether a causal link can be proven between whatever was or was not said and where those citizens chose to spend the night of 6 April 2009.

Much of the prosecution's case revolves around a television interview, recorded a few hours before the meeting but aired after it, in which De Bernardinis said that “the scientific community tells me there is no danger because there is an ongoing discharge of energy” — a statement that most seismologists deem incorrect.

Although no such statement appears in the minutes of the meeting that followed, the judge argued in 2012 that the other six defendants did nothing to contradict De Bernardinis's words, and did not sufficiently highlight the probability of a strong earthquake and its possible consequences.

At the first appeal hearing, on 10 October, public prosecutor Romolo Como (who was not involved in the original trial) asked the court to uphold the six-year convictions and even to add one more death to the manslaughter count — but asked to lift the ban from public service. He repeated that the scientists are not accused of failing to predict the earthquake, but rather of failing to properly evaluate and communicate the risk.

Como drew an analogy with the “terrifying messages” of anti-smoking campaigns. “One is still free to smoke, but at least knows the risk,” he said. “If a correct message had been given on the risk of an earthquake, if people had known that the energy-discharge theory was nonsense, we would not be doing this trial.”

Como also made a surprising reference to Giampaolo Giuliani, a local amateur seismologist who claimed to be able to predict earthquakes by measuring radon emissions from the ground and who in the weeks before the earthquake had warned about an impending disaster, he did not specifically mention L'Aquila. “He was not a charlatan. He was doing research at an international level,” Como said of Giuliani, who was not mentioned by the prosecutor in the first trial.

The second hearing, on 17 October, was devoted mostly to lawyers of relatives of the deceased, who repeated that many L'Aquila residents changed their behaviour after the major risk meeting. "Before the meeting they were afraid of the earthquake, they were taking precautionary measures. Then, something changed," said lawyer Wania Della Vigna.

In a hearing on 18 October, the defence took the stand. Carlo Sica, the lawyer representing the Italian State, asked for the seven to be fully discharged. He said that there can be no link between the meeting, which was not public, and what people did on the day of the earthquake. Instead, he blamed the media for creating a “short circuit” that delivered a wrong message, presenting the TV interview as if it were the outcome of the meeting.

Eva's lawyer Alessandra Stefano made the same point, noting that no reassuring message can be found in statements actually made by any of the indicted during or after the meeting. She also attacked local and national civil-protection officials, who were legally responsible for protecting and informing the citizens, and instead diverted blame to the scientists.

Selvaggi's lawyer Franco Coppi described his client's predicament as “profoundly unjust”. Selvaggi was not a formal member of the major risks commission and was in L'Aquila only to accompany his boss, Boschi, but was nonetheless charged and found guilty.

The next hearings will take place on 24 and 25 October, when lawyers for the other defendants will make their arguments. On 31 October, the prosecution will present counteraguments. The court is expected to deliver its verdict shortly afterwards.