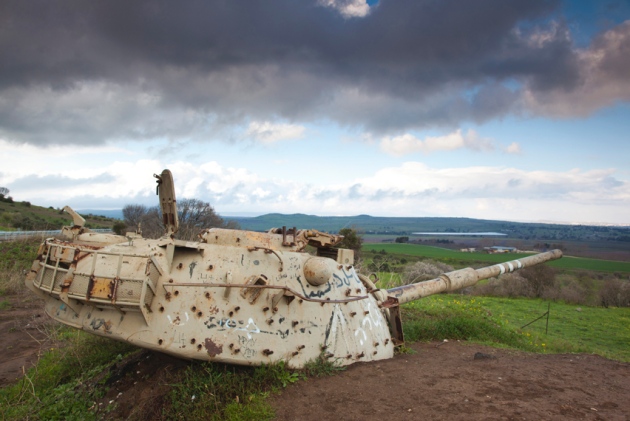 Israel's occupation of territories such as the Golan Heights is putting the flow of European science funding to the country in doubt.

When cell biologist Benny Geiger learned that Israel may decide not to participate in the next multibillion-euro research programme of the European Union (EU), he was dumbfounded. “It seemed unreal — my first thought was that there must have been some sort of mistake,” he says.

There was not. Israel had objected to EU guidelines published in July, which stated that any new agreement it made with the EU would apply only to territories within its pre-1967 borders. This would make universities and other institutions ineligible for funding of research set to take place in the occupied territories. On 14 August, in a formal response, Israeli officials charged that the policy was an attempt by the EU to push Israel to waive its claims of sovereignty over the territories. As a result, officials announced that the country would not sign up to Horizon 2020 — the €80-billion (US$107-billion) financial instrument designed to secure European competitiveness — under the proposed conditions.

For the Israeli scientific community, the stakes are very high. Not being part of Horizon 2020 would be “a huge blow on many levels”, says Geiger, of the Weizmann Institute of Science in Rehovot, and chairman of the academic board of the Israel Science Foundation, the country’s main research-funding organization. It is not just about the money, he says: it is also about the inability to integrate into the EU scientific community, and the potential loss of collaborative ties. Both would be bad news given Israel’s geographical isolation in a region that otherwise has little research activity.

The roots of the conflict lie in the EU’s policy of not recognizing Israel’s sovereignty over territories it has occupied since 1967, including East Jerusalem, the Golan Heights, the Gaza Strip and the West Bank. In December last year, EU foreign ministers ruled that “all agreements between the state of Israel and the European Union must unequivocally and explicitly indicate their inapplicability to the territories occupied by Israel in 1967”.

Israel has been involved in EU research programmes as an associate country since 1996, and is one of just a handful of non-EU member states — including Switzerland and Norway — to have this status. It has benefited enormously. The country paid just €534 million to join the EU’s Seventh Framework Programme (FP7), the forerunner of Horizon 2020, but its net gain once FP7 finishes at the end of this year will be about €634 million, with almost 1,600 Israeli scientists participating in grant agreements under the programme. 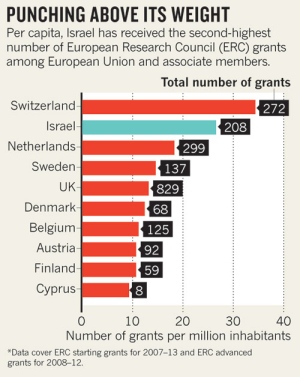 Almost half of this money supports Israeli participation in various FP7 cooperation projects. The rest went to winners of European Research Council (ERC) grants. Israeli scientists have been unusually successful in these, winning prestigious and highly competitive individual-investigator grants for basic-research projects. More than 30 were awarded ERC funding in its sixth Starting Grant competition in July, for example. The country is second only to Switzerland in its number of ERC grantees per capita (see ‘Punching above its weight’).

“We are watching with a great sadness — even horror — at the mixing of politics into science,” says Geiger, himself a holder of an ERC grant. “There is a lot to lose.”

In a bid to break the deadlock, another round of negotiations took place in Brussels last week. No concrete progress was made, but Michael Jennings, a European Commission spokesman, described the day-long talks as “constructive and open”, with both sides hoping to find a resolution before Horizon 2020 launches on 1 January.

He added that the restriction of Horizon 2020 funding to the non-occupied territories would have little impact on Israeli scientists, almost all of whom work within pre-1967 borders. Only one beneficiary of FP7 grants, cosmetics company Ahava Dead Sea Laboratories in Mitzpe Shalem in the West Bank, would have been ineligible had the guidelines been in place for FP7, and currently only about €1.5 million flows into the occupied territories. Both sides are considering how the guidelines could be implemented in a mutually acceptable manner, and will meet again in a few weeks, Jennings said.

Ruth Arnon, president of the Israel Academy of Sciences and Humanities in Jerusalem, wrote to Prime Minister Benjamin Netanyahu last month, warning him that Israel’s failure to join Horizon 2020 would damage the country’s science irreversibly. Others have warned that it is up to the scientific community to save the programme. “Whatever their individual political views, Israeli scientists need to come together to shout their concerns about a future without Horizon 2020 — but they have shied away from this,” says Yadin Dudai, a neuroscientist at the Weizmann Institute.

Dudai is especially concerned about Israel’s future involvement in the Human Brain Project, an 80-partner EU flagship programme that aims to unlock the mysteries of the mind and develop treatments for brain diseases. The project is currently in a ramp-up phase that is being partially funded by FP7; eight of its principal investigators are Israeli, including Dudai.

Gal Richter-Levin, a neuroscientist at the University of Haifa, says it is good for scientists to rub shoulders with their EU counterparts. “When we collaborate with colleagues in other countries, we have the opportunity to be criticized by them over a beer in the evenings,” he says. “This helps us to form our political views — and this is also a reason for not abandoning scientific collaborations.”