North Korea may have conducted two covert nuclear weapons tests in 2010, according to a fresh analysis of radioisotope data.

The claim has drawn scepticism from some nuclear-weapons experts. But if confirmed, the analysis would double the number of tests the country is known to have conducted and suggest that North Korea is trying to develop powerful warheads for its fledgling nuclear arsenal.

It might also explain a bizarre statement issued by North Korea's state news agency in May 2010, which said that the country had achieved nuclear fusion. The news was largely ridiculed in the South Korean and Western media — but it was not so quickly dismissed by the small circle of experts who devote their careers to identifying covert nuclear tests. South Korean scientists had detected a whiff of radioactive xenon at around that time, hinting at nuclear activity in its northern neighbour, which had already tested nuclear devices in 2006 and 2009. 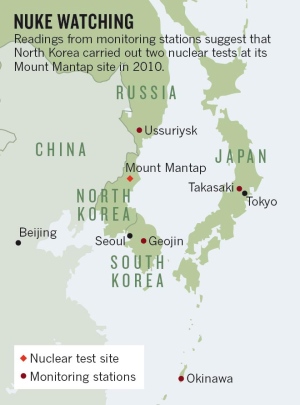 In August 2010, experts meeting in Vienna informally discussed the South Korean data and measurements from an international network of radioisotope-monitoring stations operated by the Comprehensive Nuclear-Test-Ban Treaty Organization (CTBTO), which supports an as-yet-unratified treaty that seeks to ban nuclear-weapons testing.

Among those experts was Lars-Erik De Geer, an atmospheric scientist at the Swedish Defence Research Agency in Stockholm. When they looked at the monitoring data from Russian and Japanese stations close to North Korea, "the conclusion from everyone was, 'Hell, we cannot explain them.'", De Geer recalls (see 'Nuke watching').

Unwilling to let the matter rest, De Geer took the radioisotope data and compared them with the South Korean reports, as well as meteorological records. After a year of work, he has concluded that North Korea carried out two small nuclear tests in April and May 2010 that caused explosions in the range of 50–200 tonnes of TNT equivalent. The types and ratios of isotopes detected, he says, suggest that North Korea was testing materials and techniques intended to boost the yield of its weapons. His paper will appear in the April/May issue of the journal Science and Global Security1.

De Geer’s theory rests on the detection of several short-lived radioisotopes that are generated during man-made nuclear processes.

Ratios of xenon-133 and xenon-133m (a higher-energy, ‘metastable’ form of the isotope) point towards an explosion in mid-April. The ratio of more short-lived isotopes — barium-140 and its radioactive decay product lanthanum-140 — pointed to a second test around 11 May. Indeed, the presence of barium-140 can be explained only by a sudden nuclear event, he says. "In Sweden, we saw this kind of thing decades ago from Russian underground tests." Ratios of other xenon isotopes also point to a fast nuclear reaction that involved uranium. Until now, North Korea's programme was thought to be based on plutonium, although rumours of a covert uranium programme have persisted for years.

De Geer speculates that North Korea is trying to build a more powerful bomb. Advanced nuclear weapons often have a small quantity of the heavier isotopes of hydrogen, known as deuterium and tritium. When a warhead detonates, it squeezes the deuterium and tritium until they fuse together. The fusion reactions release neutrons that in turn boost the fission process, increasing its yield. De Geer says that low-yield tests of the sort he suspects took place can be a first step in building a tritium-boosted weapon.

Frank von Hippel, a physicist at Princeton University in New Jersey, says that De Geer’s analysis provides convincing evidence of some kind of nuclear fission explosion. But he does not agree that it necessarily involved two weapons tests, or a fusion boost. "I hope that other experts will analyse it and see whether they can put forward alternative, simpler explanations," he says.

Others remain deeply sceptical that the tests took place at all. Most troubling is the lack of any seismic vibrations to support the radioisotope data, according to Ola Dahlman, a retired geophysicist who spent years working with the test-ban group's detection network. The Korean peninsula is wired to spot the tiniest shake from a nuclear explosion, Dahlman says. "It should have been able to see something."

Jeffrey Lewis, director of the East Asia non-proliferation programme at the Monterey Institute of International Studies in California, agrees. De Geer’s hypothesis "doesn't feel right to me", he says. The monitoring system alone simply can't prove that some other sort of nuclear incident, such as a reactor accident, wasn't responsible. Dozens of reactors are currently operating in East Asia, he says, and without seismic data or on-the-ground inspections it is impossible to verify where the isotopes come from. "You need other data."

De Geer’s arguments rest in part on data collected by the CTBTO’s network of sensors, but the organization itself has never officially analysed all these data, according to Lassina Zerbo, director of the data centre in Vienna that handles the sensor network. Zerbo says that although the data are processed and shared quickly after such an event, formal analyses are done only if requested by the CTBTO's member states. None of the 182 signatories to the treaty ever made such a request, he says. Zerbo adds that the organization does not have access to the South Korean data mentioned in the paper, which was collected by that nation’s network of monitoring stations.

De Geer hopes that his paper will spur debate and encourage another look at the mysterious emissions. Zerbo says that it may indeed prompt scientists in CTBTO member states to re-examine the data — and then possibly to ask the CTBTO to conduct a formal analysis.