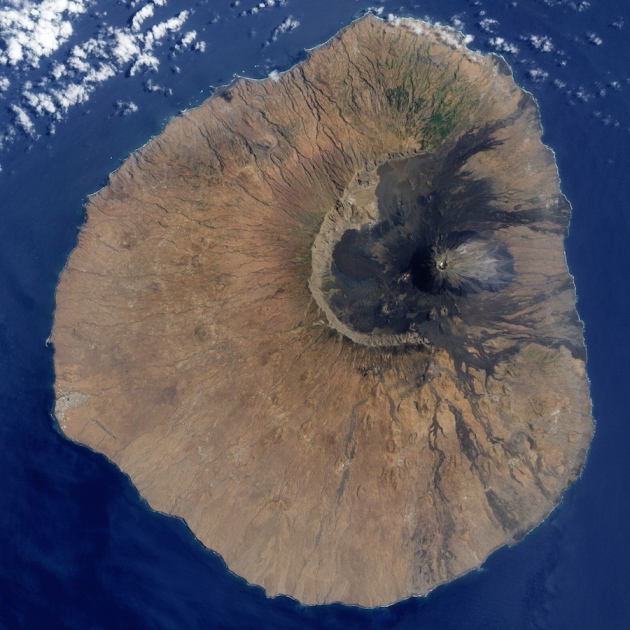 The gaping scar in this satellite image tells the tale of the Fogo volcano's eastern-flank collapse.

When the eastern flank of a Cape Verde volcano splashed into the sea some 73,000 years ago, it generated an enormous wave that rose to 170 metres of height before it crashed into a nearby island, geophysicists have discovered. The mega-tsunami, reported on 2 October in Science Advances1, is one of the largest in the geological record.

These kinds of apocalyptic events could happen again, although it is impossible to say when or where, says Ricardo Ramalho, a geophysicist at the University of Bristol, UK, and a co-author of the Cape Verde study. “Most of these fairly young oceanic volcanoes — such as in the Azores and the Canary Islands and Hawaii — are incredibly high and steep, so the potential energy for a collapse to happen again is there,” he says.

The flanks of some oceanic volcanoes periodically collapse. Huge amounts of rock slide down and displace the water below, triggering tsunamis. A volcanic collapse in Hawaii 100,000 years ago, for example, generated a mega-tsunami2 that inundated land at elevations higher than 300 metres. The mechanisms behind these massive landslides are not yet well understood.

In 2011, a team of European geologists published evidence3 of moderately sized tsunamis hitting Santiago Island in Cape Verde, an archipelago country off the coast of Senegal. According to the paper, the events occurred around 100,000 years ago as the oceanic volcano Fogo gradually collapsed 55 kilometres away.

As he read that paper, Ramalho remembered that, while he was conducting PhD research on Santiago Island in 2007, he had noticed mysterious boulders strewn across a wide plateau around 200 metres above sea level. He realized that to rip the rocks from cliffs and push them so far upwards would have required a much larger wave than the ones suggested by the 2011 paper.

Ramalho and his colleagues went back to Santiago and took samples of the boulders. They found that they were composed of a type of rock that was otherwise found only around the edges of the plateau. A trail of chaotic debris — including marine fossils — also pointed to a tsunami. They calculated that a wave powerful enough to carry the largest boulder would have been at least 170 metres tall as it reached the coastline, sloshing up the island to reach elevations as high as 270 metres. 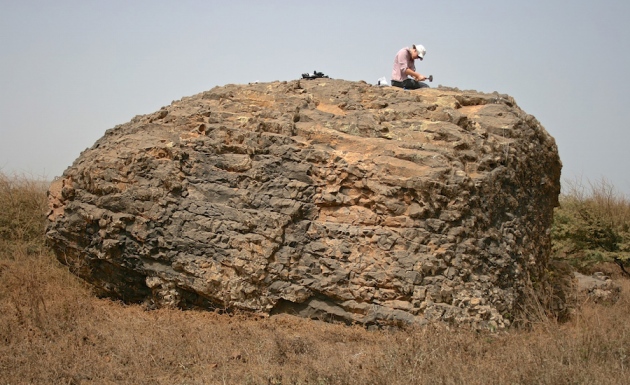 Giant boulders deposited by the Fogo tsunami enabled researchers to date the collapse.

To date the tsunami more precisely, collaborators at Columbia University’s Lamont–Doherty Earth Observatory in Palisades, New York, measured the concentrations of helium isotopes in the boulder debris. When cosmic rays from the Sun hit minerals such as olivine in this type of rock, helium-3 is produced. By measuring the amount of helium-3 on the boulder surfaces that have been exposed since the wave hit, they could tell how long ago the event occurred. The analysis pinpointed the disaster at roughly 73,000 years ago. This falls into the range of previous estimates4 obtained from analysing landslide debris around Fogo itself, which indicates that it collapsed between 65,000 years and 124,000 years ago.

These findings will help researchers to better model volcanic collapses and subsequent tsunamis, according to Raphaël Paris, a volcanologist at the Blaise Pascal University in Clermont–Ferrand, France, and a co-author of the 2011 paper.

Ramalho says that researchers should now focus on understanding the behaviour of the waves that are generated by these massive landslides. Such tsunamis may not have the same long-distance range as those that originate from underwater earthquakes, such as the 2004 tsunami in southeast Asia that travelled thousands of kilometres from where the seafloor ruptured.

Several researchers also told Nature that more work is required to be able to adequately monitor the chances that volcano flanks might collapse. “Since we’ve never seen such an event happen on an ocean island, we don’t have practical experience with how the collapse will manifest itself,” says Michael Poland, a geophysicist at the US Geological Survey in Vancouver, Washington.

Fogo is an active volcano that regularly shows signs of unrest, and has erupted as recently as early 2015. Shape deformations are one warning sign of an imminent collapse. “There may also be geochemical monitors, such as helium and radon in ground gas and groundwater that would be useful in monitoring,” says Gary McMurtry, a geophysicist at the University of Hawaii in Honolulu.