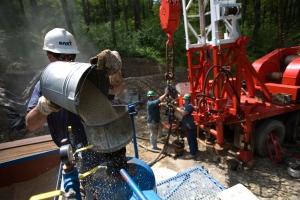 Natural gas extraction via hydraulic fracturing has been linked to contamination in groundwater.

The US Environmental Protection Agency (EPA) sparked a firestorm in December last year when it released a draft report1 suggesting that the use of hydraulic fracturing — or 'fracking' — to extract natural gas had contaminated groundwater near Pavillion, Wyoming. Industry officials have long denied that fracking affects groundwater, and Pavillion has become the first high-profile test of this claim. On 26 September, the US Geological Survey (USGS) released data showing the presence of groundwater contamination in the region2. Although the data would seem to support the EPA’s assessment — as does an independent analysis released by environmental groups this week3 — the survey did not seek to determine the source of the contamination. Nature examines the on-going debate and how it relates to broader questions about groundwater contamination from fracking across the United States.

How did this investigation begin?

After local landowners complained about the smell and taste of their water, the EPA began in 2009 to analyse the groundwater outside Pavillion. The agency tested the water in the shallow wells that tap the groundwater above the 169 gas-producing wells in the field; in two municipal wells in the town; and in several surface and deep wells that it drilled for monitoring purposes. It found evidence of contamination in both the shallow and deep wells, and attributed the shallow contamination to the 33 or so nearby surface pits used to store drilling wastes1. The pits could not, however, explain the contamination in the deeper groundwater.

What is the evidence that fracking contaminated the deep groundwater?

A range of hydrocarbons showed up in the deep wells, as did some synthetic organic chemicals associated with fracking fluids and drilling activities. The EPA also found high pH levels that could be explained by potassium hydroxide, which was used in a solvent at the site. The agency also analyzed the evolution of the pollution plume to determine that groundwater seems to be migrating upward, suggesting that the source of contamination came from the gas production zone rather than the surface pits.

Officials with both industry and the state of Wyoming questioned the EPA’s data as well as its interpretation, arguing that some hydrocarbons are to be expected through natural migration from the gas field. The state then asked the USGS to conduct a new analysis and provide the data to the state. The USGS provided those data last week2; it also sent samples to the EPA, which is conducting its own analysis.

What do the latest results suggest?

The USGS provided only the raw data and no interpretation. An analysis released this week by two environmental groups found that the data support the EPA’s original conclusion. A scientist who has investigated possible contamination at other sites, Rob Jackson of Duke University in Durham, North Carolina, says that multiple lines of evidence are certainly “suggestive” of fracking as a source of contamination.

Does this settle the debate?

No. Encana Corporation, an energy producer based in Calgary, Canada, that has wells in the field near Pavillion, maintains that neither the EPA draft report nor the USGS results provide any proof that drilling operations are to blame.

Is this case unique?

There have been allegations of groundwater contamination at other locations where fracking has taken place, but it is not yet clear how common the problem might be. It is less likely, for instance, in regions where the gas is very deep in the ground, such as in Pennsylvania, where production takes place at depths of 1,500 meters or more. In Pavillion, the gas wells are as shallow as 372 metres, while wells tapping groundwater are up to 244 metres deep; this makes communication between the two zones much easier.

A report in February by the University of Texas at Austin's Energy Institute found no evidence of contamination from fracking near wells in Texas, Pennsylvania or New York, but the university is currently reviewing that report after the lead scientist, Charles Groat, was accused of having a conflict of interest (see 'Unfortunate oversight').

A 2011 study in the Proceedings of the National Academy of Sciences by Jackson and his colleagues4 documented high concentrations of methane and other hydrocarbons in groundwater close to fracking operations in Pennsylvania and New York. But Jackson says that the contamination may have come not from the fracking but from the wells themselves, which can serve as a conduit between geological formations if not properly sealed.

The EPA plans to complete its analysis of the water samples and then turn over all of the data for an independent peer review later this year. In a press conference on Tuesday, Wyoming Governor Matt Mead said that the state would analyse the USGS data and then determine whether it needs to change its rules on fracking operations.

In parallel, the EPA is conducting a national assessment of environmental and public-health issues associated with fracking and expects to produce an initial report later this year.

An earlier version of this story did not make clear that an analysis of USGS data by environmental groups found that the data are consistent with but do not confirm - with EPA conclusions about water contamination due to fracking. This has been clarified.