Scientists have long believed that organisms and chemical compounds found in the oceans' depths could help them solve many medical mysteries. The greatest challenge has been access. The bioluminescent creatures of interest live hundreds of metres down and cannot survive at surface pressure. Yet neuroscientists interested in studying possible connections between patterns of bioluminescence and human brain activity don’t have the equipment needed to observe deep-sea fish in their native environment.

The Exosuit — a two-metre, 240-kilogram 'atmospheric diving system' — allows a diver to explore up to 305 metres down without succumbing to the cold and intense pressure, which is 30 times greater than at the surface. More than providing protection, the Exosuit features 1.6-horsepower foot-controlled thrusters and 18 rotary joints in the arms and legs to provide a freedom of movement impossible to achieve in even the most nimble submersible.

At least those are the promised benefits of this new apparatus for ocean exploration. The real test of the $1.3 million Exosuit’s worth will come in July, when researchers of the Stephen J. Barlow Bluewater Expedition drop the suit in the ocean about 160 kilometres off the coast of New England. There, Exosuit pilot Michael Lombardi will investigate an area called The Canyons, an underwater geographic region that includes a steep drop from the continental shelf to depths of more than three kilometres. The expedition’s goals are to record luminescent flashing patterns from a variety of mid-depth organisms and to identify new bioluminescent molecules with potential for medical applications.

Lombardi will descend at a rate of about 30 metres per minute until he reaches his target depth 10 minutes later. This dive will take place at night, when fish living in the deep ocean do their daily vertical migration to the mid-ocean, or mesopelagic zone, about 300 metres deep. A robotic submarine called the DeepReef-ROV will accompany Lombardi, supplying lights, cameras and other equipment.

“The Exosuit allows the human form to be embedded in the environment in a special way,” said Lombardi, the expedition’s project coordinator and the New York City American Museum of Natural History’s (AMNH) dive safety officer, at the 27 February launch for the museum’s Exosuit exhibit. Lombardi and several other expedition scientists spoke at the event, which kicked off the suit’s weeklong stay at the museum.

Equipped for the abyss

Life support is self-contained on the suit, which uses an oxygen re-breathing system. “You’re recycling the cabin gas supply,” Lombardi said. “Carbon dioxide is removed chemically and oxygen is replenished to match your metabolic rate while at work or at rest.” The suit can provide 50 hours of life support, although Lombardi’s test dive is scheduled to last no more than a few hours.

A wetsuit dive to these same depths would require a very complex mixture of gases, including oxygen, nitrogen and helium. “I’ve had a lot of experience doing that, and you end up against a wall very quickly in terms of how much time you have at depth,” Lombardi said. “In the Exosuit, you’re breathing the same atmosphere you have here, about 21 percent oxygen.”

The suit will have a 2.5-centimetre diameter tether with copper and fiber-optic elements that provide power and communications to Lombardi. He will use the fiber to relay information about his life-support system as well as high-resolution video of the specimens he collects in special Plexiglas cartridges.

Each of the suit’s gloves will be fitted with tools that Lombardi can use during his dive. This includes a suction tube that will tease organisms into the cartridges — each about 25 centimetres long, 15 centimetres wide and 7.6 centimetres thick. Lombardi will immediately place each cartridge in front of the DeepReef-ROV’s camera, which will send images to researchers monitoring his work from the surface.

The expedition’s scientists will examine the images and decide whether to load a cassette onto the robot sub or release the specimen. The cassettes could be pressurized, although it’s not clear whether they will be pressurized for this particular expedition, says Jim Clark, vice president of J.F. White Contracting Co., which owns the Exosuit and is building the cassettes. Without proper pressurization, the samples would likely not survive the trip to the surface. 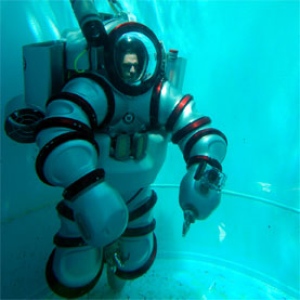 Despite being surrounded by sophisticated technology, Lombardi’s human touch is the key to the mission’s success. It is up to him to identify and capture the samples that might be of interest to his colleagues. “The human eyes are still more sensitive than any of the cameras that we have,” said Vincent Pieribone, the Bluewater Expedition’s chief scientist, at the Exosuit exhibit opening.

Pieribone is particularly interested in what Lombardi finds. With the help of green fluorescent protein from the Aequorea victoria jellyfish, scientists have been able to watch processes — such as the development of nerve cells in the brain — previously invisible to them. Work with this protein is so significant, it won Osamu Shimomura, Martin Chalfie and Roger Tsien the 2008 Nobel Prize for Chemistry. These and other similar proteins exist only in nature, and they exist in the deep ocean, said Pieribone, a Yale University School of Medicine professor and an AMNH research associate.

Expedition scientists also want to study mesopelagic organisms’ bioluminescent flashing patterns. A lot of these fish have elaborate arrangements of lights all over their bodies, said John Sparks, curator-in-charge of the AMNH’s Department of Ichthyology, at the 27 February event. Scientists know that these fish produce light via chemical reactions “but we really don’t know how they’re signaling,” he added. “Based on the arrangement of these lights we can infer that they’re communicating with each other.” Without live bioluminescent fish to study, scientists instead have to base their inferences on the organism’s anatomy.

The researchers are also interested in learning more about biofluorescence, which Sparks said is poorly understood. Whereas bioluminescence involves chemicals interacting within a fish’s body, biofluorescence is produced by outside light, of which there is little in the ocean’s depths. With biofluorescence, an organism absorbs light, transforms it and then ejects it as a different color.

If the July expedition is a success, the researchers want to send the Exosuit to study deep coral reefs as well as the creatures living in and around them. Such technology could open up for study the vast region of ocean just out of reach of SCUBA divers and too shallow to warrant expensive deep-sea submarine expeditions.