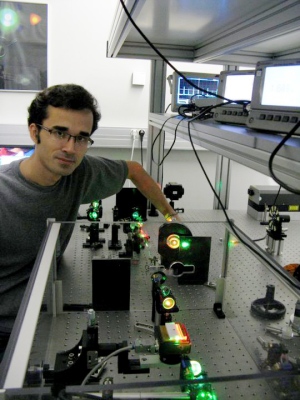 Jailed physicist Omid Kokabee is an expert in lasers, which can be used for enriching uranium.

Omid Kokabee, a former graduate student in physics who has been imprisoned in Iran since January 2011, has written in an open letter that he was being persecuted for refusing to cooperate with Iranian military projects. In another, private letter, he says these projects are related to nuclear applications.

“Is it a sin that I don’t want, under any circumstances, to get involved in security and military activities?” he asks. “I have just turned 30 years old after spending two years in prison, when I am eager to pursue scientific research,” he remarks. Nature received copies of the letters from Kokabee’s contacts, who asked to remain anonymous because of fear of retribution.

In the public letter, addressed to Ali Sharifi, who Kokabee describes as his former roommate at Sharif University of Technology in Tehran, Kokabee says that he was asked to collaborate with the military before and during his detention, but always refused. The letter is dated March 2013 and marked as having been written from section 350 of Evin prison in Tehran, which houses those accused of political and security crimes. (See Nature's English translation of Kokabee's letter from the original Farsi.)

Kokabee started a PhD programme specialising in laser physics at the Institute of Photonic Sciences in Barcelona, Spain, in 2007 and then transferred to the University of Texas in Austin in 2010. He was arrested in a Tehran airport on 30 January 2011, as he was leaving Iran after a visit. On 13 May 2012 he was sentenced to 10 years for “cooperation with a hostile government”.

As in his earlier letters, Kokabee asserts his innocence and claims that numerous violations plagued his interrogation, detention and trial. Scientific organizations — including the American Physical Society, the American Association for the Advancement of Science, the International Commission for Optics and the Committee of Concerned Scientists — have called for Kokabee to be freed or for him to receive a fair trial.

“Since 2005, I have been invited several times to work as a scientist and technical manager for military and intelligence projects,” the public letter reads. These instances include being offered admission to a PhD programme with full sponsorship by the Atomic Energy Organization of Iran (AEOI), he writes. In all cases, Kokabee declined.

One of these invitations, Kokabee writes, was offered the day before his arrest, in a conversation with a member of the AEOI. A document that Kokabee’s contacts provided to Nature shows that he was received by a person at AEOI: according to the private letter by Kokabee, this person was part of the office of the high-ranking AEOI official Mohammad Ghannadi-Maragheh.

The pressure continued after his jailing, Kokabee writes, and included a visit to Kokabee from an alleged representative of Iran’s National Elites foundation, and one to his family in his hometown of Gonbad-e Qabus from government representatives. In some of these cases, Kokabee says that he was offered release from prison in exchange for cooperation.

In the private letter, Kokabee writes that in 2006 he was asked to work on a high-powered carbon dioxide laser to be used for isotope separation, for military application. He says that he was considered a good candidate for this job because of his managerial skills.

Eugene Arthurs, chief executive of the International Society for Optics and Photonics in Bellingham, Washington, says that carbon dioxide lasers are indeed considered a promising tool for isotope separation. “The particular process that looks successful is called SILEX (separation of isotopes by laser excitation) and it involves carbon dioxide laser,” he says. In September 2012, GE Hitachi received approval to develop the technology at a plant in Wilmington, North Carolina.

Although laser isotope separation could be used for energy or medical purposes, one of its potential applications is to enrich uranium for use in nuclear weapons, Arthurs says. SILEX has been described as a proliferation risk by science policy experts.

Other possible military applications of high-power carbon dioxide lasers are anti-missile weapons, military range-finding and an optical remote-sensing technology called laser-imaging detection and ranging (LIDAR), according to another expert, who asked not to be named.

Arthurs points out that Kokabee’s research on using high-intensity lasers to induce transmutation, his work as part of the optical parametric oscillators group at the Institute of Photonic Sciences and the Austin laboratory's focus on the  interaction of high-power lasers and matter constitute a background “that puts him in the laser and nuclear field”. However, Arthurs adds that Kokabee was doing basic science that had no direct application to isotope separation.

The Iranian embassy in Madrid did not respond to Nature's requests for comment.