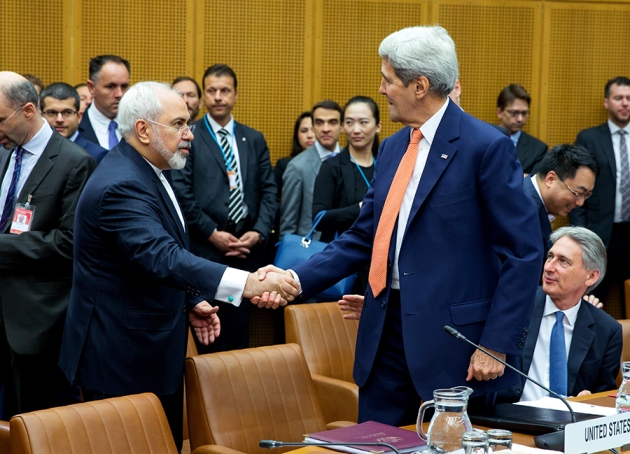 Foreign Minister of Iran Mohammad Javad Zarif shakes hands with US Secretary of State John Kerry at the negotiations in Vienna.

The agreement between six world powers and Iran over its nuclear programme is a historic step towards normalizing Iran’s international relations — and has potentially profound implications for science, Iranian researchers say.

Should the deal signed on 14 July in Vienna hold up, it would ease sanctions that have crippled Iran’s economy, and would affect scientists inside and outside the country.

“The agreement as a whole will surely have far-reaching consequences for science in Iran,” says Reza Mansouri, an astronomer at the Institute for Research in Fundamental Sciences (IPM) in Tehran and a former deputy science minister of Iran. Mansouri sees the success of the talks as significant for “the mere fact of showing the ability and the will of having international cooperation and interaction”.

“International collaborations have taken a very serious dip during the sanctions,” says Shahin Rouhani, a physicist at the IPM and president of the Physics Society of Iran.

Once restrictions lift, he says, travelling will become easier both for Iranian scientists who are participating in conferences and for foreign scientists who are visiting. Science labs in the country should also find it simpler to order parts for their experimental set-ups from abroad.

The sanctions have made it difficult for Iran to participate in international collaborations such as SESAME, a synchrotron light source that is under construction in Jordan and whose members include Turkey, Pakistan, Israel and several Arab countries. Herman Winick, a physicist at Stanford University in California and a member of the SESAME Scientific Advisory Committee, says that lifted restrictions on banking activities should enable Iran to make the payments it has pledged to the project.

“I expect that the agreement will also strengthen Iran’s connection to the international scientific community,” Winick adds, “enabling me and others to visit Iran and continue connections with my many friends there.”

Moreover, one of Iran’s major sites for enriching uranium, an underground facility in Fordow, could soon become a major physics laboratory. According to an unofficial draft of the agreement, Fordow “will be converted into a nuclear, physics, and technology centre and international collaboration will be encouraged in agreed areas of research”.

The proposal has been in the works since April, when Iran agreed to a preliminary deal; as Nature reported at the time, Fordow’s tunnels could, for instance, house a particle accelerator or detectors for studying cosmic rays or neutrinos; any remaining centrifuges might be repurposed to produce isotopes for use in medical imaging. Mansouri says, however, that it is too early to discuss concrete prospects for research and that options remain open regarding what physics might happen at Fordow.

The prospects of any of this happening depend first on the Vienna deal surviving political challenges — particularly in the US Congress — and ultimately on international observers certifying Iran’s full compliance with the agreement.

The deal intends to ensure that Iran’s nuclear programme is used for peaceful means, and not to make a bomb. “Every pathway to a nuclear weapon is cut off,” said US President Barack Obama, in an early-morning statement from the White House on 14 July.

Iran has committed to removing two-thirds of the centrifuges that it had been using to enrich uranium; not to use any remaining centrifuges to make weapons-grade, highly enriched uranium; and to get rid of 98% of its existing enriched-uranium stockpile.

It will also modify its nuclear reactor in Arak to a technology that will not produce weapons-grade plutonium. And it has pledged to allow international monitoring of its entire nuclear-supply chain, to ensure that no material is diverted to any covert military programme. Sanctions will be gradually lifted, but they will snap back into place if Iran violates any of the conditions.

Frank von Hippel, a nuclear-weapons and non-proliferation physicist at Princeton University in New Jersey, calls the deal “good news”. “We should now move towards establishing a norm that enrichment programmes should be managed by multinational entities rather than by individual countries,” which is crucial to enable peaceful uses of nuclear power while preventing nuclear proliferation, he says.

The agreement is designed so that — at least for the next decade — if Iran were to opt out, it would take the country a year at minimum to 'break out' — that is, to produce enough nuclear fuel for one bomb. Von Hippel says that the agreement should align with that goal. “The break-out time for producing enough highly enriched uranium for a bomb would be about a year, and that for producing enough plutonium in a research reactor would be multiple years,” he says.