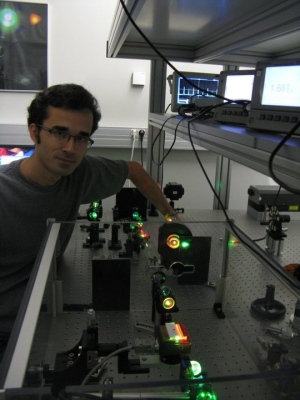 Physicist Omid Kokabee has consistently denied all charges brought against him by Iran.

Omid Kokabee, an Iranian graduate student who has been imprisoned in Tehran for the past 15 months, was sentenced to 10 years on Sunday for allegedly conspiring with foreign countries against Iran.

Judge Abolghasem Salavati of Branch 15 of Tehran's Revolution Court — who is famous for his harsh sentences — tried 10 to 15 people in the same trial, under the collective charge of collaborating with Israel’s intelligence agency, Mossad.

Kokabee, a graduate student who previously worked on the physics of optics at the Institute of Photonic Sciences (ICFO) in Barcelona, Spain, and more recently at the University of Texas in Austin, was arrested in Tehran in February 2011 on charges of “communicating with a hostile government” and “illegal earnings” (see 'A year in jail without trial for Iranian student accused of spying').

Close contacts of Kokabee in Iran have lamented the fact that no proof was presented at the trial to justify the sentence. Whereas other prisoners in the group declared themselves guilty in a television broadcast on the evening before the trial, the physics student has consistently denied all charges and refused to speak in court. (Faces are obscured in the broadcast, but Kokabee may be the person who appears at 24 seconds in a blue shirt.) He plans to appeal the sentence, according to his contacts.

Since Nature first highlighted Kokabee's case (see ‘Missing physicist may have been jailed in Iran’), various organizations have written to the Iranian authorities asserting his innocence and asking for a fair trial — including the Committee of Concerned Scientists, a human-rights group based in New York; the American Physical Society in College Park, Maryland; and a group of four international optics organizations. His case has been included as a cause for concern in the report of Ahmed Shaheed, the United Nations Special Rapporteur on human rights in Iran.

In an open letter written while in prison, Kokabee claimed that the authorities were trying to obtain his “collaboration” through threats to him and his family; in another, he insisted that he was not a political activist, something that his friends confirm. Kokabee’s friends speculate that his frequent trips to Iran — totalling four or five in 2010 — may have aroused the suspicions of the Iranian authorities.

“This will send chills through the Iranian higher-education system, particularly scholars and students who seek to enhance and expand their horizons abroad,” says Hadi Ghaemi, a physicist previously at City University in New York and director of the International Campaign for Human Rights in Iran, an association that has recently promoted an initiative for imprisoned students.