The arrival of an alien species can turn an ecosystem on its head. Researchers have found an invasive mussel that has caused a complete ecological role reversal, turning a host into a parasite and vice versa.

In a study published today in Biology Letters1, the team focused on ecosystems involving European bitterling (Rhodeus amarus) — small, pale-silver freshwater fish that lay their eggs in the gills of mussels. The mussels, for their part, release their larvae into the water, where they colonize and develop on fish, including bitterling. Both bitterling — most of which are found in East Asia, except the single species in Europe — and the family of mussels they colonize have evolved mechanisms to resist the other: in some sites throughout the world, one or other may prevail, whereas in others, they may develop a mutual relationship. 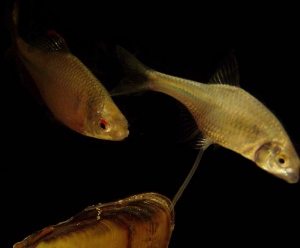 Some European fish lay their eggs in mussels — but invasive mussel species are fighting back.

Martin Reichard, an evolutionary biologist at the Institute of Vertebrate Biology in Brno, Czech Republic, and his colleagues have studied European bitterling for years. Several years ago, they began working at a Polish site that had been invaded by a Chinese mussel species, Anodonta woodiana, from the same family as the native mussels. Reichard was keen to investigate how bitterling and the native mussels were affected by the invading species.

European bitterling usually have the advantage, laying their eggs in native mussels and resisting colonization by the mussel larvae. But at the Polish site, A. woodiana ejected bitterling eggs laid in them. The bitterling's “reproductive output was zero”, says Reichard.

The team also studied a population of bitterling and A. woodiana in the River Kyjovka in the Czech Republic, and carried out controlled experiments in pools and aquaria.

The Czech bitterling would not lay eggs in A. woodiana, always choosing to lay them in the native species.

That is good for the bitterling, says Reichard, because they are not wasting eggs where they have no chance of survival. But although the fish managed to resist colonization by native mussel larvae, they were successfully exploited by A. woodiana larvae. “This invasive species basically reversed the host–parasite relationship completely,” says Reichard.

“This is an elegant case study to illustrate the complexities of interactions between species,” said Anthony Ricciardi, an invasive-species biologist at McGill University in Montreal, Canada. “This is not one species eating another. It’s something more subtle than that.”

The study also shows the importance of the evolutionary context in the behaviour of invasive species, says Ricciardi. Bitterling interactions with A. woodiana differ between the Czech and Polish sites, suggesting that the two A. woodiana populations are at different stages in their co-evolution with the fish, says Reichard, perhaps because the invading mussels came from different source populations.

Ricciardi says that A. woodiana is spreading across the globe as its larvae hitch rides on aquacultured fish such as Asian carp. Whether it will have widespread negative impacts on the ecosystems it invades is still unknown, but Ricciardi and Reichard agree that so far, it does not seem to be poised to wreak havoc on the scale of the zebra mussel (Dreissena polymorpha) and quagga mussel (Dreissena rostriformis bugensis), which have invaded North America’s Great Lakes in the past three decades, disrupting food webs, damaging infrastructure and fouling native mussel populations.

In the River Kyjovka, populations of native mussels seem stable for now, but a study2 has suggested that they are in decline in other regions. Wherever native mussel populations stay strong, European bitterling should have a place to put their eggs.