The plant hopper Issus coleoptratus has natural gears that synchronize the action of its hind legs during a jump.
ERIC OLSON/SCIENTIFIC AMERICAN

If you are a young plant hopper, leaping one metre in a single bound, you need to push off with both hind legs in perfect unison or you might end up in a spin. Researchers have discovered that this synchrony is made possible by toothed gears that connect the two legs when the insects jump.

Zoologists Malcolm Burrows and Gregory Sutton at the University of Cambridge, UK, say that this seems to be the first example in nature of rotary motion with toothed gears. They describe their findings today in Science1.

The researchers' micrographs and videos of the jumping mechanism of the plant hopper Issus coleoptratus show that the joints that connect the hind legs to the body have rounded shapes and a series of tiny intermeshing teeth, each about 20 micrometres long. 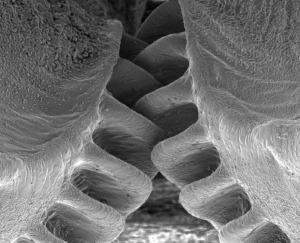 The intermeshing gears in a scanning electron micrograph.

When the insect jumps, the cog teeth join so that the two legs lock together, ensuring that they thrust at exactly the same time (see video above and image at left). “The gears add an extra level of synchronization beyond that which can be achieved by the nervous system,” says Burrows.

Infant plant hoppers, known as nymphs, can take off in just 2 milliseconds, reaching take-off speeds of almost 4 metres a second (see video below). For motions this rapid, some mechanical device is needed to keep the legs synchronized and to avoid lopsided jumps that might lead to the insects spinning out of control. The problem does not, however, arise in all jumping insects: whereas the attachments of plant hoppers' hind legs are adjacent to each other, the legs of grasshoppers and fleas attach to opposite the sides of the body and move in parallel planes. This helps to stabilize the insects and even enables them to jump one-legged.

The cog feature is analogous to the toothed gears that have been used in rotating machinery for millennia: they were described by Aristotle and Archimedes more than 2,000 years ago and they seem to have been used in ancient China even earlier. But, like the wheel, this human invention previously seemed to have little precedent in the natural world.

Gears are not the only mechanical solutions that were long thought to be unique to human engineering and then found to have been mastered by evolution: The screw-and-nut system is another example. In 2011, Alexander Riedel of the State Museum of Natural History in Karlsruhe, Germany, and his colleagues reported a screw-thread joint in the legs of a weevil beetle2.

Riedel considers the latest work on Issus “significant and exciting”. He says that it adds to the view that “most of the basic components of engineering have been developed in the natural world”. The reason that gears are not more common, Riedel adds, might be because there are different ways to synchronize limbs. Honeybees, for example, “couple the movement of both wings to stabilize their flight by using pegs, not as moving gears, but more like a Velcro.”

Curiously, the gears are found only in the plant hopper's nymph stage. When it sheds its exoskeleton for the last time to reach full adulthood, the gears disappear. In adults, the legs are instead synchronized by a simple, frictional-contact method.

Burrows and Sutton are not yet sure why this is so, but it might be because of ease of repair. “If a gear breaks it can’t be replaced in adults,” says Burrows. “But in nymphs, a repair can be made at the next of several moults.” Another reason might be that the larger and more rigid adult bodies make the frictional method work better than the gear mechanism, he adds.