Two anti-clotting compounds already approved for use in humans may have a surprising role in treating radiation sickness. The findings, reported online today in Nature Medicine, also reveal another avenue for understanding and treating the effects of radiation exposure.

Last year's nuclear accident in Fukushima, Japan, renewed anxiety over the lack of treatments for radiation poisoning. It was long thought that the effects of exposure to high doses of radiation were instantaneous and irreversible, leading to destruction of the gut and loss of bone marrow cells, which damages blood-cell production and the immune system. As a precaution against mass radiation poisoning, many governments stock a treatment called granulocyte colony-stimulating factor. This boosts bone marrow function, but it must be kept refrigerated, has occasional side effects, and must be taken as soon as possible after a disaster has occured. 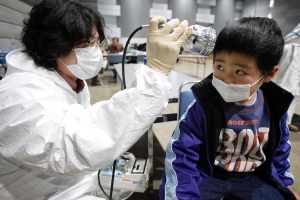 Radiation exposure is relatively easy to detect, but few treatment options exist for people who have already been exposed to high doses.

Hartmut Geiger, a stem-cell biologist at the Cincinnati Children’s Hospital Medical Center in Ohio, and his colleagues have uncovered a therapeutic strategy that can be deployed up to 24 hours after radiation exposure. “Most people think the game is over after you have the damage,” says Geiger. “Now, we know you can modify that.”

The two compounds are thrombomodulin (Solulin/Recomodulin), currently approved in Japan to prevent thrombosis, and activated protein C (Xigris). Xigris, made by pharmaceutical firm Eli Lilly in Indianapolis, Indiana, was a leading drug for treating inflammation from blood poisoning until it was pulled from the US market last October because of a lack of efficacy. In experiments by Geiger and his colleagues, treating mice with either drug led to an eightfold increase in key bone marrow cells needed for the production of white blood cells, and improved the survival rates of mice receiving lethal radiation doses by 40–80%.

The radiation study came about when two independent lines of research were united by a chance phone call. Geiger and his colleagues were screening for mutant mice that showed radiation resistance. They noticed that one mutant mouse was particularly resistant, with a mutation that meant it was producing an excess of thrombomodulin.

Meanwhile, a separate team, including physiologist Hartmut Weiler of the Blood Center of Wisconsin in Milwaukee, had been investigating how naturally occurring protein C in the gut would respond to radiation. A mutual colleague connected the two teams after recognizing the seeds of a potentially fruitful collaboration. Thrombomodulin, it turns out, activates protein C. “We talked on the phone, and there was stunned silence after we listened to each other’s data,” says Weiler.

In one key experiment, the researchers exposed 48 mice to 9.5 grays of radiation (a measure of absorbed radiation dose). After 24 hours and 48 hours, 30 mice were injected with activated protein C. After 30 days, only 30% of the uninjected mice had survived, whereas 70% of the injected mice were still alive. Thrombomodulin also increases survival, but must be administered within 30 minutes of radiation exposure to be effective, the researchers found.

“It’s great that the reagents they are using have already been used in humans,” says Mark Whitnall, a radiation biologist at the Armed Forces Radiobiology Research Institute in Bethesda, Maryland. He cautions that the researchers have not conducted the study at the full range of radiation doses as is standard in the field, but he says that it is a great “first stab” and opens up new possibilities for potential drug targets.

The compounds add to a growing arsenal of anti-radiation drugs that are currently being investigated. Last year, researchers at Harvard Medical School in Boston, Massachusetts, identified a potent combination of an antibiotic and a protein that could stave off radiation-induced infections. Whitnall says that two other compounds for treating radiation sickness are due to move forwards into human clinical trials, and that several others have shown promise in animal studies. “It’s been an under-appreciated area,” he says.