Astronomers are claiming a new benchmark in the quest to see the Universe’s first galaxies. By taking advantage of a rare cosmic zoom lens — in which the gravity of a large mass magnifies light from objects in the distant background — a team of researchers has spotted a galaxy so remote that its light was emitted just 490 million years after the Big Bang, when the Universe was a mere 3.6% of its present age. 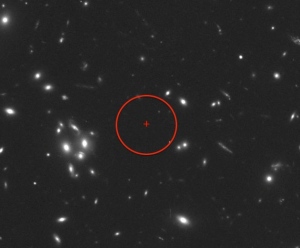 The 'X' marks the location of the galaxy MACS1149-JD1, which is too faint to be seen in this Hubble image.

Astronomers have previously found evidence for a handful of galaxies about as young and remote, but the newly discovered object is noteworthy because of the confidence that underlies the measurement of its redshift, a surrogate for distance. Based on images taken in several colours, or wavelength bands, using NASA’s Hubble Telescope and Spitzer Space Telescope, the measurement is “one of the most accurate estimates ever obtained” for a candidate galaxy from the early Universe, the team asserts in a paper posted online on 12 April.

And because the faint galaxy appears 15-fold brighter than it otherwise would — thanks to the lensing effect of a massive galaxy cluster that lies between it and Earth — researchers say that the object is luminous enough to be examined in detail by Hubble’s planned successor, the James Webb Space Telescope (JWST), now scheduled for launch in 2018. The team used a Hubble survey called CLASH (Cluster Lensing and Supernova Survey with Hubble) to find the lensing cluster, MACS1149.

The boost in brightness also enabled the team, which includes Wei Zheng of Johns Hopkins University and Marc Postman of the Space Telescope Science Institute, both in Baltimore, Maryland, to estimate several key properties of the apparently youthful galaxy, dubbed MACS1149-JD1. The team calculates that the body is less than 200 million years old, with the mass of its constituent stars weighing in at only 1% that of the Milky Way.

The authors declined to comment on the findings while the paper is under review, but several researchers who have read the online report say they are excited. “These data are as good as they get before the JWST,” says galaxy hunter Rogier Windhorst of Arizona State University in Tempe, who is not a member of the study team.

Because of the nature of cosmic expansion, light emitted by distant galaxies is shifted to longer, or redder wavelengths, than the light emitted by nearby bodies.  Zheng and his colleagues estimate that MACS1149-JD1 has a redshift of 9.6, similar to other galaxies that are candidates for being extremely remote.

“I wouldn't declare this to be a sure thing, but it looks like a good candidate,” says Mark Dickinson, an astronomer at the National Optical Astronomy Observatories in Tucson, Arizona. “I like the fact that this object is bright enough that one can hope to make confirming observations now, with existing facilities, before JWST.”

Dickinson says that if the galaxy was indeed from the early Universe, it should show up very faintly in Spitzer Space Telescope observations at an infrared wavelength of 3.6 micrometres. In fact, Spitzer has not yet detected the galaxy at all at this wavelength. The claim would be more convincing, says Dickinson, if the telescope stared for a longer time and recorded a faint image at 3.6 micrometres. A senior NASA review panel has now extended the Spitzer mission, and it is probable that observers will take longer exposures of the galaxy with the orbiting telescope, Dickinson says. In addition, astronomers using ground-based telescopes will hunt for telltale emissions from hydrogen atoms in the galaxy, which could be used to directly measure redshift rather than estimate it, he adds.

Richard Ellis, a cosmologist at the California Institute of Technology in Pasadena, says that the possibility that he is most excited about is not mentioned in the online paper. He notes that the observations — even though they are of only one galaxy — come from such a narrow field of view that they suggest the early Universe may hold a larger number of baby galaxies than researchers have previously estimated. That, in turn, could indicate that the ionizing radiation from such galaxies played an even more important part in breaking apart hydrogen atoms, allowing light to stream freely into space for the first time.