Stopping deforestation and reducing atmospheric carbon emissions by keeping carbon locked up in trees takes more than just banning forest clearance, as Indonesia is finding out.

The country — home to the world’s third-largest tropical forest and some of the highest carbon emissions from deforestation — is halfway through a two-year moratorium on the issuing of new permits to clear forests on 65 million hectares of land. The initiative is part of a US$1-billion deal with Norway to protect the South East Asian nation’s forest and cut the country's greenhouse-gas emissions by 26% by 2020. It puts Indonesia’s efforts to conserve its forests a step ahead of those taken by most other heavily forested nations. 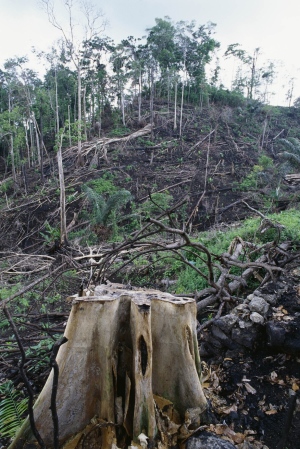 Indonesia's moratorium on clearing forests is not enough for the country to meet its climate change goals.

But as increasingly accurate forest maps and data on clearance permits become available, it is growing clear that the moratorium is having little effect on deforestation rates and carbon emissions — and secures a smaller area of forest than was thought.

However, the Indonesian government has confirmed its commitment to its climate-change pledge by extending the protected area and stripping a palm-oil firm of a permit to develop carbon-rich peatland.

“No other country has done anything like this,” says Daniel Murdiyarso, a climate-change scientist at the Center for International Forestry Research (CIFOR), based in Bogor, Indonesia.

The government’s transparency in providing accurate data on forested areas and clearance permits is an “achievement and great step forward”, says Murdiyarso, although that in itself won’t do much to reduce carbon emissions.

Norway’s environment minister, Bård Vegar Solhjell, acknowledges the limitations of the moratorium. “We know that the moratorium itself is not sufficient to reach the climate mitigation pledged or to stop deforestation in the speed necessary,” he said in a statement last week.

Progress is slow in part because the clearance-permit ban is not as radical as it at first seemed. An analysis from CIFOR, published last October, found that 42.5 million hectares of forest covered by the moratorium are already protected under Indonesian law, with only 22.5 million hectares receiving extra protection.

An updated version of Indonesia’s forest map, published last week, shows that the government has included a further 862,000 hectares of forest under the ban, but it has also excluded another 482,000 hectares, so the net additional protected forest is 380,000 hectares. It is not yet clear what kinds of forest are covered by the changes.

That could be the key to making the moratorium successful, because some types of forest have greater conservation value and carbon-storage potential than others, says William Laurance, a forest-conservation scientist at James Cook University in Cairns, Australia.

Laurance and his colleagues studied the Indonesian forest maps and found that the moratorium excludes roughly 46 million hectares of vulnerable rainforest known as mixed-dipterocarp forest. The findings were published online in Conservation Letters1 in April.

“The mixed-dipterocarp forests of Indonesia are among the most biologically important and imperilled real estate on earth,” Laurance told Nature.

These forests were left out of the moratorium because they had previously been logged and so were thought to lack conservation value, says Laurance. But what remains is being rapidly cleared for palm-oil or wood-pulp plantations or is being re-logged, and so is in imminent danger, he adds.

Laurance does commend the Indonesian government for protecting 11.5 million hectares of forests growing on carbon-rich peatland. If deforested, these areas could release up to eight times more carbon into the atmosphere than would dryland forests growing on mineral soil.

The Indonesian government’s priority for the second and final year of the ban must be to continue to improve forest monitoring and governance of forest-clearance permits, says Nigel Sizer, director of the Global Forest Initiative at the World Resources Institute, an environmental think tank based in Washington DC. “This will determine if Indonesia can stop deforestation,” he says.

Sizer welcomed the government’s move to retract a permit awarded to Kallista Alam, an Indonesian palm-oil company, to develop an area of peatland in the western province of Aceh. The permit had been awarded after the ban was announced.

“The moratorium is imperfect but it has made some progress. There’s no option but to press ahead and hope for the best,” agrees Laurance. “Indonesia is like some of the mega-banks in the modern financial world. It’s too big to fail.”