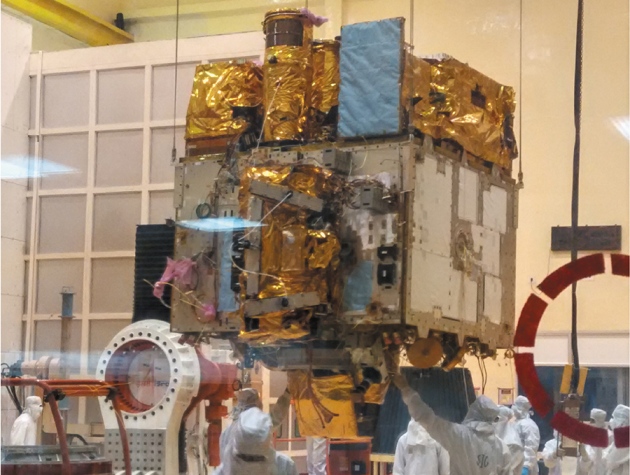 Multiple devices will allow ASTROSAT to access more wavelengths than most other telescopes.

Update: India's first space observatory dedicated to science, ASTROSAT, was successfully launched on 28 September from the space port of Sriharikota in the Bay of Bengal.

A satellite is about to bring India international acclaim, at least in astronomy circles. On 28 September, ASTROSAT, the country’s first space observatory dedicated to science, will take to the skies.

As well as boosting the activities of Indian astronomers — who are abuzz with excitement ­— the satellite is expected to benefit researchers all over the world. Designed to orbit Earth for five years, it has capabilities not offered by existing space telescopes.

“It is a notable and fantastic step forward for Indian astronomy, and has broad implications for astronomers everywhere,” says Henry Yang, a mechanical engineer at the University of California, Santa Barbara, who is chair of the board for the Thirty Meter Telescope (TMT) project, an observatory planned for Mauna Kea, Hawaii.

India has had ground-based telescopes for decades, including the Giant Metrewave Radio Telescope near Pune and the Indian Astronomical Observatory in the Himalayan cold desert of Ladakh. But although these can detect radio waves and infrared radiation, which easily penetrate Earth’s atmosphere, they cannot monitor higher frequencies that the atmosphere tends to block — most ultraviolet light, for example, and all X-rays and γ-rays. Without a space telescope of their own, Indian scientists have had to rely on ones operated by NASA and the European Space Agency (ESA) to study such radiation bands, which carry information about exotic neutron stars, newly born or exploding stars and the spiralling hot gases around black holes.

“Often, as we do not know the exact specifics of the telescope design, we are not able to tune our research proposals accordingly,” says Varun Bhalerao, an astrophysicist at India’s Inter-University Centre for Astronomy and Astrophysics (IUCAA) in Pune.

Indian astronomers have long been at a disadvantage for X-ray and ultraviolet studies, says Somak Raychaudhury, who is the director of the IUCAA and has been involved with ASTROSAT since its inception. Orbiting 650 kilometres above Earth, ASTROSAT will collect data on this portion of the light spectrum, giving Indian scientists faster — and guaranteed — access to the information. They will also have privileged access. “Everybody, senior or junior scientists, is talking about studies they can now propose,” adds Bhalerao, who is excited about studying neutron stars from India without having to wait for international support. Bhalerao has been studying these stellar objects using high-energy X-ray wavelengths with NASA’s Nuclear Spectroscopic Array (NuSTAR) at the California Institute of Technology in Pasadena, and is looking forward to extending that study to the lower-energy X-ray and ultraviolet bands that will be available through ASTROSAT.

With five instruments, or ‘payloads’, tuned to detect different types of light, ASTROSAT will observe a wider variety of wavelengths than most other satellites, from visible light to the ultraviolet and X-ray bands. Mylswamy Annadurai, director of the Indian Space Research Organisation’s Satellite Centre in Bangalore, calls this “the strength and uniqueness of ASTROSAT”. Black holes, galaxy clusters and other celestial objects can blaze with different wavelengths as different events occur. “When all payloads are combined, ASTROSAT gives a coverage which no other observatory has achieved till now,” he says.

For some researchers, the satellite’s X-ray detection capability will fill the gap left when NASA’s Rossi X-ray Timing Explorer satellite died in 2012, after 16 years of operations. Like Rossi, ASTROSAT will look regularly at large areas of the sky, enabling it to track simultaneously a large number of X-ray sources that change with time, says Randall Smith, an astronomer at the Harvard–Smithsonian Center for Astrophysics in Cambridge, Massachusetts. By contrast, the X-ray telescopes currently in space generally focus on studying individual objects in great detail.

ASTROSAT’s X-ray detectors can also cope with very bright objects that would saturate those on other satellites such as NASA’s Chandra X-ray Observatory or ESA’s X-ray Multi-Mirror (XXM-Newton) mission. According to Andrew Fabian at the University of Cambridge’s Institute of Astronomy in the United Kingdom, this capability will make ASTROSAT “invaluable” for alerting the international community to short-lived bursts of X-rays — a key indicator that something new is happening in space.

This story was updated on 28 September to include the news of ASTROSAT's launch.