Squeamish science students in India might not have to grapple with cutting up rats or frogs for much longer. The University Grants Commission (UGC), the national body in New Delhi that funds and governs Indian universities, announced new rules earlier this month that would phase out almost all animal dissection and replace it with teaching using computer simulations and models.

The decision has drawn criticism from biology teachers, who fear that the ruling will hamper anatomy lessons, producing a generation of researchers without appropriate laboratory skills. 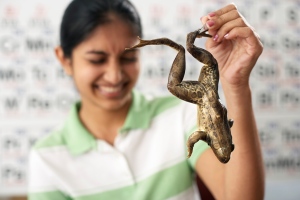 Dissections will soon be a thing of the past in most Indian university classrooms.

“Dissections are essential as they give students a hands-on experience of learning animal anatomy. There is no way one would fully deserve a degree in zoology without ever touching an animal,” says Vartika Mathur, a zoologist at Sri Venkateswara College, University of Delhi.

India is following a global trend to phase out animal dissection, or to make it voluntary, despite opposition from scientists who say that the experience is impossible to replicate with models.

Several universities in the United Kingdom and the United States have phased out animal dissection because of the economic costs of housing animals and because of pressure from animal-rights groups, says Anjali Goswami, a palaeobiologist who specializes in mammalian evolution and development at University College London. Many institutions now use either computer models or previously dissected samples, which she says “is definitely of concern to teachers of anatomy-based courses”.

Although Goswami notes that it is too soon to tell what impact the ruling will have on training, she points out that there is a gulf between learning the theoretical and practical aspects of anatomy. The hands-on, practical experience “gives you a completely different perspective for the spatial relationship between different organs”, she says. “For those who go on to study surgery, for instance, having an innate feeling for how tissues respond to pressure is very important,” Goswami adds.

India’s ban comes after pressure from animal-rights groups such as the Indian arm of PETA (People for the Ethical Treatment of Animals), based in Mumbai, which used Bollywood celebrities in a high-profile campaign to bring college students on side. The new rules promote the use of plastic replicas or computer models and allow animal dissection only as a last resort. If deemed absolutely necessary, say the rules, a teacher should dissect one animal while the class observes.

Although several computer simulations of dissection already exist, the UGC says that Indian software firms should develop new models appropriate to “the Indian context”. The commission will sponsor workshops to train teachers in these new technologies.

The UGC’s rationale for the ban has perplexed teachers such as Birendra Nath Mallick, a neurobiologist at Jawaharlal Nehru University in New Delhi. For instance, the UGC guidelines say that because anatomical knowledge has been expanded through advances in other branches of biology, there is now “an over-emphasis of learning of anatomy as laboratory exercises” — a view that Mallick finds “very myopic”. The commission also says that its decision is based on a concern over biodiversity loss, but neither Mallick nor Mathur are aware of any data specifically linking species extinction with the use of animals for dissection.

The UGC’s argument that the rules would improve animal welfare standards doesn’t hold water either, say the teachers. Universities already abide by guidelines for the ethical treatment of animals, says Mallick, and these ensure that animals are dissected only when the benefits to science outweigh the costs of killing them. Goswami agrees that dissections “aren’t frivolous exercises”, but a necessary prelude to further research.

Although the ruling would affect an estimated 2.5 million students, the UGC is vague on the details. It wants universities to police each other by setting up “dissection monitoring committees” containing faculty members from neighbouring institutions. Yet it doesn’t specify a date by which dissections should be phased out, who should fund the development of India-specific computer simulations of dissection, or even what the penalty for non-compliance would be. The commission did not respond to Nature’s request for more information.

Despite this lack of clarity, there’s no doubt that universities will want to comply, says Mallick. The UGC controls Indian universities’ purse-strings, so if a university “doesn’t follow the rules, the UGC could cut off its grants”, he notes.