Researchers call it sheer coincidence that a newly discovered piece of space junk is officially designated WT1190F. But the letters in the name, which form the acronym for an unprintable expression of bafflement, are an appropriate fit for an object that is as mysterious as it is unprecedented. 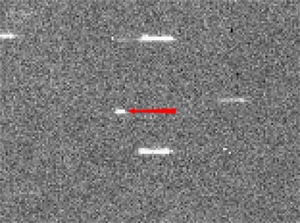 A piece of space junk on a collision course with Earth appears as a blurry speck in an image taken by the University of Hawaii 2.2-metre telescope.

Scientists have worked out that WT1190F will plunge to Earth from above the Indian Ocean on 13 November, making it one of the very few space objects whose impact can be accurately predicted. More unusual still, WT1190F was a 'lost' piece of space debris orbiting far beyond the Moon, ignored and unidentified, before being glimpsed by a telescope in early October.

An observing campaign is now taking shape to follow the object as it dives through Earth’s atmosphere, says Gerhard Drolshagen, co-manager in Noordwijk, the Netherlands, of the European Space Agency’s near-Earth objects office. The event not only offers a scientific opportunity to watch something plunge through the atmosphere, but also tests the plans that astronomers have put in place to coordinate their efforts when a potentially dangerous space object shows up. “What we planned to do seems to work,” Drolshagen says. “But it’s still three weeks to go.”

WT1190F was detected by the Catalina Sky Survey, a programme based at the University of Arizona, Tucson, aimed at discovering asteroids and comets that swing close to Earth. At first, scientists didn’t know what to make of this weird body. But they quickly computed its trajectory after collecting further observations and unearthing 2012 and 2013 sightings from telescope archives, says independent astronomy-software developer Bill Gray, who has been tracking the debris with astronomers at NASA’s Jet Propulsion Laboratory in Pasadena, California.

Russian meteor largest in a century

WT1190F travels a highly elliptical orbit, swinging out twice as far as the Earth–Moon distance, Gray says. Gray’s calculations show that it will hit Earth at 6:20 utc, hitting the ocean about 65 kilometres off the southern tip of Sri Lanka. Much, if not all, of it will burn up in the atmosphere, but “I would not necessarily want to be going fishing directly underneath it”, Gray says.

The object is only 1 to 2 metres in size, and its trajectory shows that it has a low density, and is perhaps hollow. That suggests an artificial object, “a lost piece of space history that’s come back to haunt us”, says Jonathan McDowell, an astrophysicist at the Harvard–Smithsonian Center for Astrophysics in Cambridge, Massachusetts. It could be a spent rocket stage or panelling shed by a recent Moon mission. It is also possible that the debris dates back decades, perhaps even to the Apollo era. An object seen orbiting Earth in 2002 was eventually identified as a discarded segment of the Saturn V rocket that launched the second mission to land men on the Moon.

WT1190F is a rare breed of space object. Researchers are currently tracking only 20 or so artificial objects in distant orbits, says Gareth Williams, an astronomer at the Minor Planet Center in Cambridge, Massachusetts. There are probably many more such pieces of space junk in orbit around the Earth–Moon system, but it is impossible to say how many. No others are known to have made the return trip to Earth, although it is likely that some have done so without anyone noticing, McDowell says.

Drolshagen plans to get spectral information on the object, which may help to identify it, and he hopes to coordinate impact observations conducted onboard ships or aeroplanes. But that may be the end of the concerted effort to study this class of object. Unlike near-Earth asteroids, space debris that flies well away from Earth has not commanded significant amounts of funding or attention. And the US military, which tracks space debris, says that it lacks the ability to identify WT1190F or to predict its path.

“There is no official, funded effort to do tracking of deep-Earth orbits the way we track low-Earth orbit,” McDowell says. “I think that has to change”.