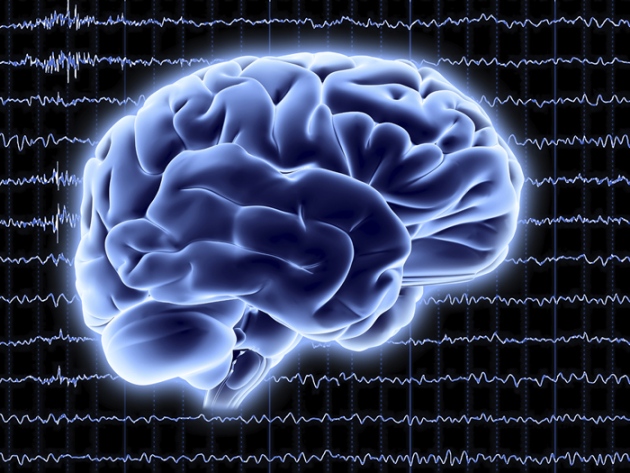 Researchers are not sure how deep-brain stimulation exerts a therapeutic effect.

Long used to treat movement disorders, deep-brain stimulation (DBS) is rapidly emerging as an experimental therapy for neuropsychiatric conditions including depression, Tourette’s syndrome, obsessive–compulsive disorder and even Alzheimer’s disease. But despite some encouraging results in patients, it remains largely unknown how the electrical pulses delivered by implants deep within the brain affect neural circuits and change behaviour.

Now there is a prototype DBS device that could provide some answers, researchers reported on 10 November at the Society for Neuroscience’s annual meeting in San Diego, California. Called Harmoni, the device is the first DBS implant to monitor electrical and chemical responses in the brain while delivering electrical stimulation.

“That’s new data that we haven’t really had access to in humans before,” says Cameron McIntyre, a biomedical engineer at Case Western Reserve University in Cleveland, Ohio, who is not involved in the work.

Researchers hope that the device will identify the electrical and chemical signals in the brain that correlate in real time with the presence and severity of symptoms, including the tremors experienced by people with Parkinson’s disease. This information could help to uncover where and how DBS exerts its therapeutic effects on the brain, and why it sometimes fails, says Kendall Lee, a neurosurgeon at the Mayo Clinic in Rochester, Minnesota, who is leading the project.

The results come at a time of great excitement in the DBS field. Last month, the US government's Defense Advanced Research Projects Agency (DARPA) announced a 5-year, US$70-million initiative to support development of the next generation of therapeutic brain-stimulating technologies.

The Harmoni device builds on the electrical recording capabilities of existing DBS technology by adding chemical sensing techniques that were originally developed for basic research applications in animals. Using a method called fast-scan cyclic voltammetry, the device applies a localized voltage change in the brain. This transiently pulls electrons off certain neurotransmitters — the brain chemicals that activate or inhibit neurons — giving rise to electrical currents that can be measured. Each neurotransmitter molecule produces a different electrochemical signature, which can be used to identify it and estimate its concentration every 10 milliseconds.

Lee and his colleagues has been testing parts of the Harmoni system in rats and pigs, and are moving towards trials in humans. The team uses functional magnetic resonance imaging (fMRI) during surgery to find the sometimes-distant brain areas that respond to electrical pulses at the implant site. Then, by inserting chemical and electrical sensors at those sites, the researchers can put together a picture of how neurons fire and what neurotransmitters they release in response to DBS.

Preliminary results in animals suggest that the device can measure a rise in the neurotransmitter dopamine in a part of the brain called the caudate nucleus, following stimulation of another brain area known as the subthalamic nucleus. This sequence of events is one of the proposed mechanisms for how DBS works in Parkinson’s disease therapy. 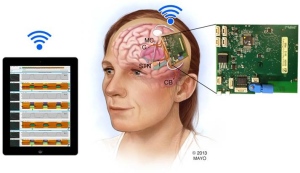 Harmoni, a new deep-brain stimulation device, is designed to record data on chemical and electrical signals in the brain and transmit the data wirelessly to a computer.

“It’s really a game-changer,” says Karen Davis, a neuroscientist at Toronto Western Hospital in Ontario, Canada, who has studied the use of DBS for pain management. She sees the potential of the device for monitoring the relevant neurochemicals involved in pain.

The research is still in its early stages, says Lee. The team is working on making the recording electrodes more durable, and the device needs to be made smaller before it can be implanted in patients. Ultimately, the team would like to develop Harmoni into a fully ‘closed-loop’ DBS device. This would use recorded chemical and electrical patterns as feedback to automatically tweak DBS parameters — the duration and timing of electrical pulses, for example — to keep the brain in an optimal state of activity.

However, neuroscientist Charles Blaha, a collaborator of Lee’s at the University of Memphis in Tennessee, emphasizes that much remains to be learned about what electrical and chemical signatures characterize healthy and disordered brain states, and how to stimulate the brain to maintain healthy patterns.

“Do we have all of the answers? No,” says Lee. “But at least we’ve developed the tools to look into this.”