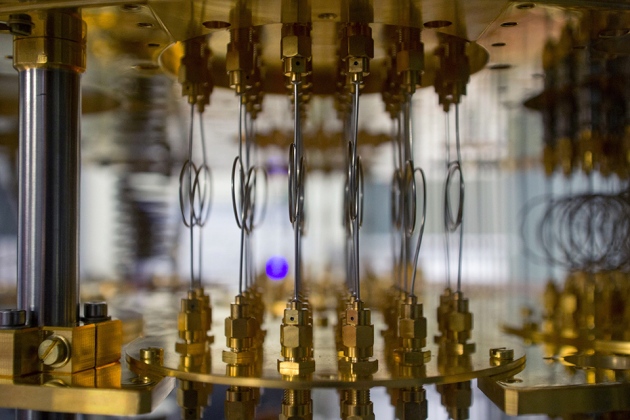 Hoping that if you build it, they will come, IBM plans to roll out the world’s first commercial ‘universal’ quantum-computing service some time this year, the company announced on 6 March. Named IBM Q, the system will be accessible over the Internet for a fee.

It will not outperform conventional computers, at least not yet. But the company says that the system will be crucial in developing a market for future quantum machines that can handle complex calculations currently out of reach of classical computers. The cloud service is the latest salvo in the heated battle to build a useful quantum computer.

The project builds on know-how developed around IBM’s existing cloud computing service: Quantum Experience, which anyone can access for free. That system went online in May 2016 and recently received an upgraded user interface. “Having it up for ten months has taught us a lot,” says physicist Jerry Chow, who leads the quantum-computing laboratory at IBM’s research centre in Yorktown Heights, New York. It has provided a way for researchers around the world to practise building quantum algorithms without access to their own quantum computer. IBM’s overall strategy is to build “a community and an ecosystem” around its technology, Chow says.

The company is being tight-lipped about when exactly IBM Q will come online, saying only that it will happen this year. It is also not disclosing how powerful the system will be, or how much it will cost to access. The company says that it has already lined up its first clients, although it would not identify them, saying only that several commercial partners will test and develop their own applications for the machine.

Quantum computers harness the counter-intuitive properties of subatomic physics, in which bits of information — called quantum bits, or qubits — can assume multiple states simultaneously, rather than simply representing a 0 or 1, as bits do in classical computing. Starting in the 1990s, theoretical physicists, including some at IBM, have developed qubit-based algorithms that in theory could perform certain tasks exponentially faster than classical computers can.

But in practice, getting enough qubits to work together to run any such algorithm — in what is known as a universal quantum computer — has proved extremely challenging. Two technologies have emerged as front-runners for handling qubits. One traps individual ions in a vacuum using electric and magnetic fields; the other incorporates qubits into microscopic superconducting circuits kept at a few degrees above absolute zero. IBM has bet heavily on the latter approach.

In recent years, Google has also entered the fray, establishing a superconducting-qubit lab in Santa Barbara, California. Google, IBM and a handful of other companies and academic labs have announced aggressive road maps for building machines that can outperform classical computers. But these machines would need to run on roughly 50 qubits each. The current record is about 20 qubits, barely enough for simple computations.

So when IBM rolled out Quantum Experience — which runs on five superconducting qubits — some did not see the point. “A lot of folks looked at it as a publicity stunt,” says physicist Christopher Monroe, who runs an ion-trap laboratory at the University of Maryland in College Park. “But I think it’s a really big deal.”

Even though it is not a state-of-the-art machine, IBM had to overcome a number of challenges to get Quantum Experience online and make it usable for researchers who are not necessarily physicists and have never worked on a quantum computer before. That included creating a system that functions without the constant attention of the physicists who built it. “Putting the machine on the cloud is an obvious thing to do,” Monroe says. “But it takes a lot of work in getting a system to that level.”

Having access to a system such as Quantum Experience or IBM Q also means that researchers around the world could start working on the unique challenges of quantum programming. This is very different from conventional coding, and requires programmers to understand and adapt to the limitations of physical qubits. In principle, a five-qubit machine is easy to simulate using a classical computer — even a laptop, Monroe says. But real qubits are not so simple.

“The real challenge is whether you can make your algorithm work on real hardware that has imperfections,” says Isaac Chuang, a physicist at the Massachusetts Institute of Technology in Cambridge.

Chow says that IBM Q will have more qubits than Quantum Experience, but the company has not yet settled on a specific number.

Era of the quantum cloud

Quantum Experience has so far attracted about 40,000 users from more than 100 countries. Chuang, for example, used it in an online, graduate-level class on quantum computing that he taught late last year, so that students could practise programming an actual quantum computer.

The system’s users have performed 275,000 experiments and produced about 15 research papers. Among them is one in which a team led by Monroe and his collaborators compared the performance of IBM’s superconducting machine with that of a five-qubit ion-trap machine at Monroe’s lab1. The company's quantum cloud service was faster, but Monroe's machine was more precise.

Monroe has co-founded a start-up called IonQ that expects to roll out a cloud-based, trapped-ion quantum service, but he won’t speculate on when. Google is planning to do the same with its own superconducting-qubit machines, but only after it has made a working 50-qubit computer, says John Martinis, who heads the company’s quantum-computing laboratory in Santa Barbara.

Meanwhile, D-Wave, a company based in Burnaby, Canada, has had a quantum-computing service on the cloud since 2010. “The core of our strategy is really gearing towards the cloud access model,” says Jeremy Hilton, senior vice president of systems. But D-Wave's machines are not ‘universal’ computers, and can only run a limited range of quantum algorithms. Nevertheless, several research groups have used it for their projects.