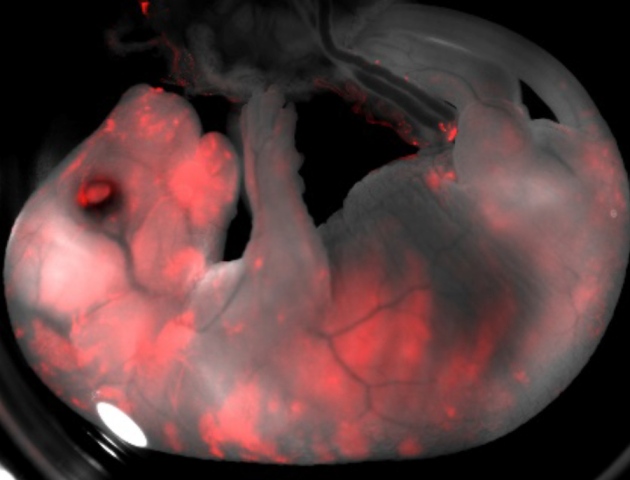 Scientists have created embryos that contain cells from both rats and mice.

Scientists have published the first peer-reviewed account of creating pig–human hybrid fetuses, a step toward growing animals with organs that are suitable for transplantation into humans.

The team that made these chimaeras also reports the creation of mouse–rat and human–cow hybrids on 26 January in Cell1. Such modified animals could provide researchers with new models for testing drugs and understanding early human development.

To create chimaeras, scientists generally inject pluripotent stem cells — which can become any type of organ — from one species into the early embryo of a second species. In theory, the foreign cells should differentiate and spread throughout the body, but in practice, producing viable hybrid embryos has proven difficult.

To get around this, a team led by developmental biologist Juan Carlos Izpisua Belmonte of the Salk Institute for Biological Studies in La Jolla, California, used CRISPR gene-editing technology to create mouse embryos without the genes that cause organs to form. The scientists then injected rat stem cells into the mouse embryos and implanted the embryos into a mouse’s uterus.

Because the rat cells still contained genes for organ formation, the resulting chimaeras had organs that were composed largely of rat cells. The animals lived for up to two years, the normal lifespan of a mouse.

Next, the researchers attempted to hybridize two distantly related species: humans and pigs. The team injected more than 1,400 pig embryos with one of three types of human induced pluripotent stem cell — normal cells, cells that were primed to develop into tissue or "intermediate" cells that were neither normal nor fully primed. All of the human cells had been modified to produce a green fluorescent protein so that they could be identified within the newly created chimaeras.

The scientists allowed the pig–human chimaeras to develop for three to four weeks before destroying them, according to ethics regulations. Chimaeras injected with the intermediate stem cells grew to contain the largest proportion of human cells, suggesting that previous attempts to create chimaeras may have used stem cells at the wrong stage of development.

Even then, only about 1 in 100,000 of the cells in the pig–human chimaeras were human — at best, says study co-author Jun Wu, a biologist at the Salk Institute.

“I think it’s a very important, very exciting paper,” says Jacob Hanna, a developmental biologist at the Weizmann Institute of Science in Rehovot, Israel. Now, he says, researchers will want to see whether the human cells in the chimaeras have normal DNA structure and gene expression.

But Hiromitsu Nakauchi, a stem-cell researcher at Stanford University in California, says that the low number of human cells in the pig–human chimaeras means that the hybrids are still a long way from serving any useful purpose, such as organ donors. “It’s a good try, but the result seems like more a negative result,” he says.

Nakauchi’s group is using similar methods to create human–sheep chimaeras, in part because he suspects that sheep embryos may be better able to take up human cells than pig embryos can. But Wu, says that pigs will probably be the best organ donors, because their large litter sizes would allow quicker production of organs. Pig organs are also close to the same size as human ones.

Researchers are pursuing a number of strategies to make pigs into human-organ donors, such as using CRISPR to disable pig proteins that could cause an immune response in primates. The advantage of chimaeras, Izpisua Belmonte says, is that researchers could one day use a patient’s own cells to create a pig chimaera with a human organ that has been grown for that individual.