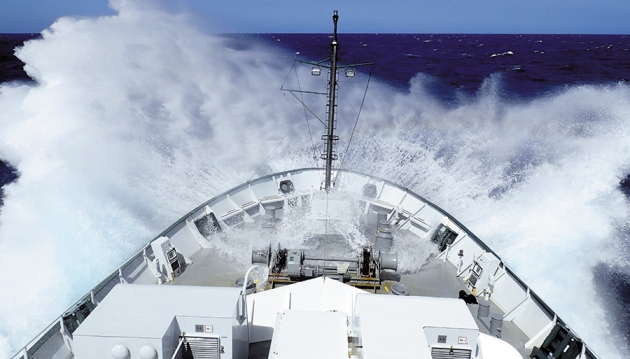 The tropical Pacific seemed out of sorts this August, as oceanographer Kelvin Richards and his team cruised along the equator east of the Marshall Islands. Six tropical cyclones had barrelled across the ocean in the previous month, and more were spinning up as Richards' research expedition got under way. The sea surface across the region was abnormally warm, with water temperatures at least 1 °C higher than expected. And when the oceanographers peered below the surface, they found signs of intense turbulence extending hundreds of metres down.

The team had found itself cruising through a spectacular El Niño warming event — one that may become the strongest ever recorded. Big El Niños can turn climate conditions in the Pacific upside down and disrupt weather around the globe. The impacts of this one have already been felt. Indonesia has suffered through a withering drought that has intensified fires in forests and agricultural land, and Pacific corals are experiencing one of the worst bleaching events on record. Peru has declared a state of emergency in some regions in expectation of flooding, and farmers in Australia have been put on alert for expected drought.

The last time a major El Niño developed, in 1997–98, extreme weather and flooding killed thousands and left a quarter of a billion people in Asia homeless. It also helped to jack up global temperatures to a point never recorded before.

For Richards, a researcher at the University of Hawaii at Manoa, the arrival of the latest El Niño turned out to be good timing. Such warmings develop only once or twice a decade, following no regular schedule, so researchers are eager to learn how to predict when an El Niño will hit and how powerful it will grow. That means that they must keep close tabs on the atmosphere and ocean, from the surface waters to the cooler layers hundreds of metres below. But getting the necessary data can be difficult. It takes years to plan research cruises, so it is hard to get a ship into the heart of the Pacific in time to study an unpredictable event. When Richards applied for ship time back in 2012, he had no idea that his trip would happen right as a warming episode was gathering strength. “It just happened to coincide with our expedition, and we gladly took the opportunity,” he says.

Most oceanographers are not lucky enough to be out at sea this year, but they are taking advantage of their colleagues' data, as well as information flowing in from research buoys and other sources. One key question that they want to answer is why every El Niño behaves differently. “El Niños are not made from a cookie cutter,” says Michael McPhaden, an oceanographer with the US National Oceanic and Atmospheric Administration (NOAA) in Seattle, Washington. The strength and impact of each El Niño seem to depend in part on which region of the Pacific warms up first, but predicting the pattern of temperature anomalies is tough. “We would really like to better understand what's causing the diversity, and how far in advance it might be possible to predict what type of event we need to prepare for,” says McPhaden. That would help forecasters to give warning of coming droughts and floods months before they hit.

The current El Niño is a glaring reminder of how much scientists need to learn. When it first started to take shape in 2014, it developed like many others. There was a weakening in the easterly trade winds that normally flow from South America towards Asia, carrying heat and moisture to the western part of the basin. This allowed warmth to spread eastwards, and researchers expected the pattern to be reinforced by westerly wind bursts that would help to push warm water eastwards (see 'Unruly ocean'). When enough warm water accumulates off the coast of South America, it prevents the normal upwelling of cool, nutrient-rich water from deeper layers. That, in turn, alters fish populations and typically ruins the anchovy harvest off the coast of Peru. 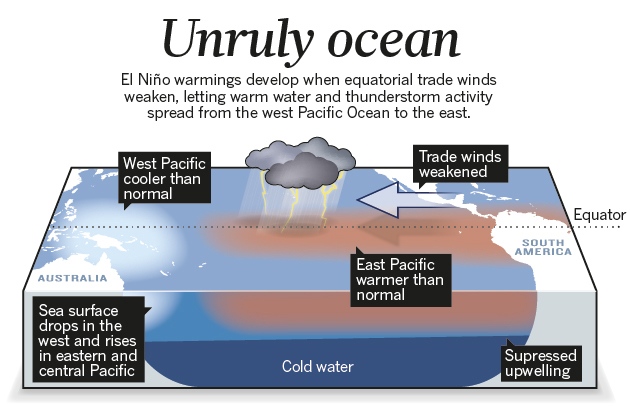 But in 2014, the warming along the equator was less pronounced than in most El Niño years, and the westerly wind bursts did not appear as expected. By mid-year, the anticipated El Niño had completely vanished.

What had stopped the show, and why the Pacific warming spectacularly resurfaced 12 months later, are questions that are puzzling ocean researchers and meteorologists. The mysteriously reborn El Niño is a fantastic opportunity for researchers to combine observations and models to find out what has happened, and perhaps to improve forecasting systems, says Axel Timmermann, an oceanographer at the University of Hawaii.

One possible explanation, he says, is that the expected westerly wind bursts came too early last year, so they did not pile up enough warm water in the eastern Pacific to inhibit upwelling. That would have stopped El Niño in its tracks. But there is also a chance that an overlooked mechanism enabled cool water from deep layers to reach the surface. Or it might simply be that the erratic nature of the El Niño Southern Oscillation (ENSO) — the irregular sequence of warm El Niño and cold 'La Niña' phases — is down to the randomness of the weather.

To test these hypotheses, researchers will need many forms of data, including measurements of ocean temperature over time, upwelling rates, water density and the strength of currents. And it will be important to compare El Niño years to neutral years and times when La Niña appears, as well as years when an event seems to be looming and then fails to materialize, says Matthew England, a climate scientist at the University of New South Wales in Sydney, Australia.

The problem is made even more difficult because ENSO behaviour may be shifting as a result of climate change. Warmer surface waters make it easier for an El Niño to start, so researchers expect the events to become more frequent. Last year, a model-based study by Wenju Cai, a physical oceanographer with the Commonwealth Scientific and Industrial Research Organisation in Aspendale, Australia, in which Timmermann was involved, suggests that by the end of the century, extreme El Niños such as the 1997–98 event will occur twice as often as they have in recent decades (W. Cai et al. Nature Clim. Change 4, 111–116; 2014).

The Pacific warming was first described in the late 1880s by a Peruvian Navy captain who reported on an unusually warm 'corriente del Niño' (ocean current of the Christ Child), so named because it appeared around Christmas time. For a long time, El Niño was thought to be a local phenomenon off Peru and Ecuador. But measurement campaigns during the International Geophysical Year 1957–58, which coincided with a major El Niño, revealed that the phenomenon spans the whole Pacific Ocean. Over the decades since, research on El Niño and La Niña has shown how conditions in the ocean and atmosphere reinforce each other to produce warming and cooling.

Although El Niño/La Niña events can cause powerful changes to weather, science-funding agencies have been reluctant to sponsor expensive research expeditions to study them because they are so hard to forecast. Researchers instead rely to a large extent on data from the Tropical Atmosphere Ocean network of buoys strung across the Pacific, which is jointly operated by NOAA and the Japan Agency for Marine-Earth Science and Technology (JAMSTEC). Temperature and salinity data from the array of 70 or so moored buoys allow researchers to detect unusual ocean warming and track the large waves that push warm water eastwards.

But the array is not without problems. Many buoys have failed in recent years, temporarily leaving scientists with data from just 40% of the network. Thanks to repair work, the system is currently back at 80% capacity. But budget cuts in 2012 forced NOAA to decommission a ship, the RV Ka'imimoana, which was used for regular maintenance of the array. Over its 16-year service with NOAA, the ship had also made itself invaluable to the El Niño research community by collecting data on factors including water temperature, salinity and density as it made its servicing runs to the buoys. With the ship no longer available, data collected from buoys and autonomous floats are not sufficient to study the subtle changes in currents and ocean mixing that may be involved in El Niño evolution, says Timmermann.

Researchers have other vessels available, such as the RV Falkor, on which Richards made his trip. The RV Kilo Moana hosted a second University of Hawaii team in the equatorial Pacific in August and September. Oceanographers Brian Popp and Jeffrey Drazen had an unexpected research opportunity: they had planned to study mercury accumulation in marine organisms in a region with strong equatorial upwelling, but the data they collected during their expedition will allow them to examine how the effects of a strong El Niño might ripple through the marine food web. And yet, says Cai, this year's El Niño — possibly a once-in-a-generation event — is a missed opportunity with respect to going out and documenting the breadth of physical, chemical and biological changes that might occur in the ocean. “It's a pity we can't have more ships at sea,” he says.

Help might be on the way. By 2020, NOAA and JAMSTEC hope to have launched a sustained Tropical Pacific Observing System of buoys and satellite instruments to advance understanding of ocean variability and improve weather and climate prediction.

That will be too late to help with the current El Niño, which is expected to peak late this year or early next. In recent months, it has been keeping pace with the most powerful El Niños on record, and westerly wind outbreaks in early October promised to keep the warming going. As a result, forecasters are warning many parts of the globe to prepare for some wild and crazy weather over the next several months.