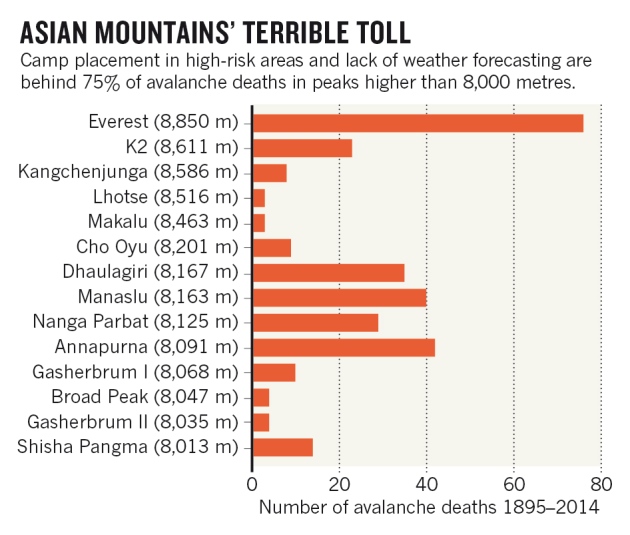 An analysis of avalanche fatalities on some of the world’s deadliest mountains suggests that 75% were the result of poor decision-making and forecasting.

Asia boasts all mountain peaks with an elevation of more than 7,000 metres, including 14 that are higher than 8,000 m, where mountaineering is especially dangerous1.

David McClung, an avalanche expert at the University of British Columbia in Vancouver, Canada, analysed around 10,000 mountaineering reports from high Asian mountains between 1895 and 2014. He found that 300 people died from snow and ice avalanches while attempting to climb peaks higher than 8,000 m.

This accounted for about one-third of total mountaineering fatalities during the period.

McClung says that improper camp placement in high-risk areas and lack of good avalanche forecasting explained about 75% of the deaths. Snow forecasts, terrain steepness and historical records of avalanche incidents can indicate, days in advance, that there will be periods of high risk of an avalanche.

Such causes of death are minimal in Europe and North America, where 90% of avalanche deaths are down to the victims themselves, through activities such as skiing and the use of snowmobiles.

“Human judgement and decisions govern the avalanche fatality statistics in high mountains of Asia,” says McClung. “More avalanche awareness and better forecasting could save many lives.”

His study, published in Annals of Glaciology2, shows that, on average, there was one avalanche death for every 90 successful ascents of the 14 peaks higher than 8,000 m.