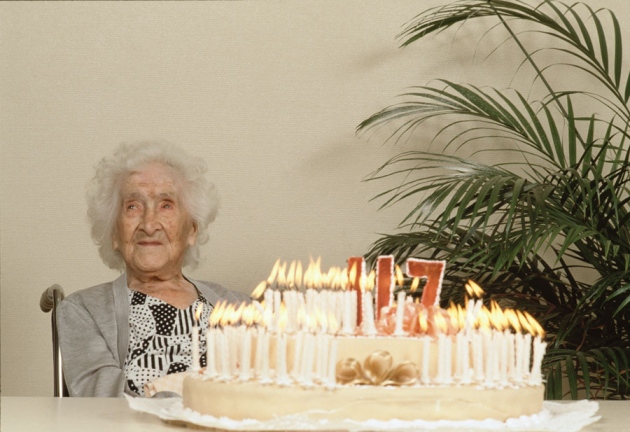 Jeanne Calment outlived her daughter and grandson by decades, finally succumbing to natural causes at the ripe old age of 122. Calment, who was French and died almost two decades ago, is thought to be world's longest living person. But if subsequent advances in medicine have lulled you into thinking that you might exceed this record, think again.

An analysis of global demographic data published in Nature1 suggests that humans have a fixed shelf life, and that the odds of someone beating Calment’s record are low — although some scientists question this interpretation. They say that the data used in the analysis are not unequivocal, and that the paper doesn’t account for future advances in medicine.

Human life expectancy has steadily increased since the nineteenth century. Reports of supercentenarians — people such as Calment who live to older than 110 — together with observations of model animals whose lifespans can be extended through genetic or dietary modifications, have prompted some to suggest that there is no upper limit on human lifespan. Others say that the steady increase in life expectancy and maximum human lifespan seen during the last century will eventually stop.

To investigate, Jan Vijg, a geneticist at Albert Einstein College of Medicine in New York City and his colleagues turned to the Human Mortality Database, which spans 38 countries and is jointly run by US and German demographers. They reasoned that if there’s no upper limit on lifespan, then the biggest increase in survival should be experienced by ever-older age groups as the years pass and medicine improves. Instead, they found that the age with the greatest improvement in survival got steadily higher since the early twentieth century, but then started to plateau at about 99 in 1980. (The age has since increased by a very small amount). 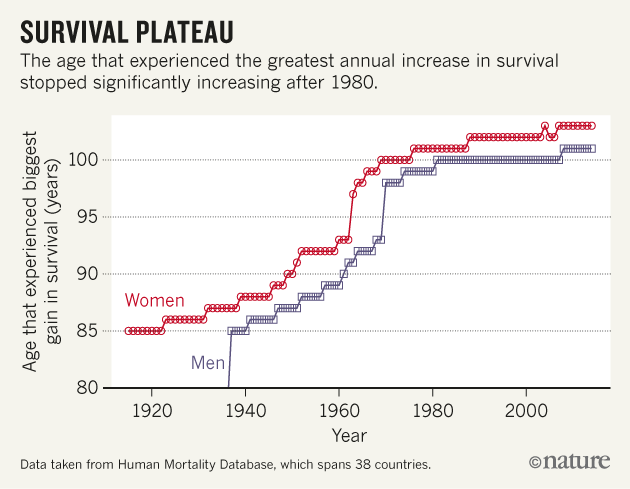 The researchers went on to look at the International Database on Longevity, which focuses on the oldest people and is run by an international team. They found that the maximum reported age of death — the age of the oldest person to die in a given year — in France, Japan, the United States and the United Kingdom (the countries with the largest numbers of supercentenarians) increased rapidly between the 1970s and early 1990s but plateaued in the mid-1990s at 114.9 years. The researchers observed the same trend when they considered the second, third, fourth and fifth oldest person who died in a given year — and a similar peak age of 115 years old when they tracked the maximum annual age of death using another database run by the international Gerontology Research Group, which validates supercentenarian claims.

Vijg’s team concludes that there is a natural limit to human lifespan of about 115 years old. There will still be occasional outliers like Calment, but he calculates that the probability of a person exceeding 125 in any given year is less than 1 in 10,000.

The limit is surprising, says Vijg, given that the world’s population is increasing — supplying an ever-increasing pool of people who could live longer — and that nutrition and general health have improved. “If anything you would have expected more Jeanne Calments in recent years, but there aren’t."

But not everyone agrees with his team's interpretation. The age experiencing the greatest increase in survival may have plateaued in many countries, says James Vaupel, founding director of the Max Planck Institute for Demographic Research in Rostock, Germany. But it has not yet plateaued in some that are particularly relevant to this research, namely Japan, which has the world’s highest life expectancy — 83.7 years for those born in 2015, nor in France or Italy, which have large populations and high life expectancies.

Vijg’s paper includes “one-sided conclusions”, says Vaupel. But Vijg argues that the increase in the survival age in even these three countries has significantly slowed down in recent years and so seems to be trending towards no increase.

Researchers also cite future developments in medicine that could further increase maximum lifespan, which the paper does not address. “Of course there are limits to human lifespan if you don’t interfere,” says Richard Faragher, a biogerontologist at the University of Brighton, UK.

In worms, mice and flies, for instance, researchers have radically extended lifespan by suppressing genes involved in growth-factor signalling, or by restricting food. Human cells have been rejuvenated by delivering RNA encoding a protein that extends telomeres, protective caps on the ends of chromosomes that are associated with ageing and disease. If it wasn’t possible to extend the maximum lifespan in humans, says Faragher, “this would make us different from every other experimental species we’ve tried”.

Vijg argues that findings in model organisms aren’t necessarily applicable to humans because these animals are bred to have certain traits. And at least one lifespan-extending strategy, caloric restriction, is much less effective when used in wild mice or monkeys, he says. “I’m not saying drugs or tissue engineering couldn’t be very beneficial to increase our average lifespan, but will they really enable us to break through this ceiling of 115? I find that highly unlikely,” Vijg says.  “Lifespan is controlled by too many genes. You could maybe plug one of those holes, but there are still another 10,000 other holes springing up.”

Biomedical gerontologist Aubrey de Grey, chief science officer of the SENS Research Foundation Mountain View, California, which develops and promotes rejeuvenation biotechnologies, is more hopeful. “Unlike a dam, the pressure on the so-far-unplugged leaks actually diminishes as one plugs more and more of them,” he says. “The result in this paper is absolutely correct, but it says nothing about the potential of future medicine, only the performance of today’s and yesterday’s medicine.”