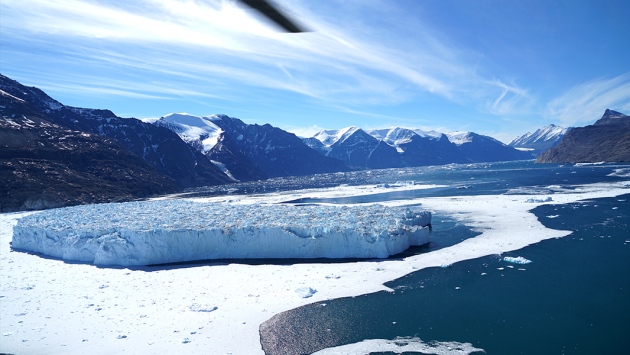 Chunks of glacier shattered when a powerful tsunami ripped through a fjord in western Greenland in June.

One of the tallest tsunamis in recorded history — a 100-metre-high wave that devastated a remote settlement in Greenland last month — was caused, unusually, by a massive landslide, researchers report.

Seismologists returning from studying the rare event hope that the data they have collected will improve models of landslide mechanics in glacial areas and provide a better understanding of the associated tsunami risks. They warn that such events could become more frequent as the climate warms. 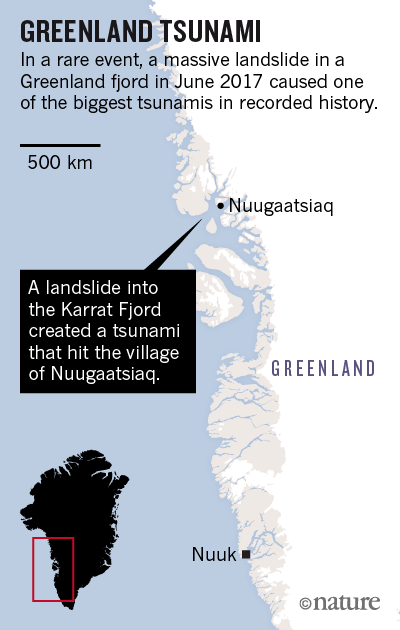 The landslide occurred on the evening of 17 June, in the barren Karrat Fjord on the west coast of Greenland. It caused a sudden surge of seawater that wreaked havoc in the fishing village of Nuugaatsiaq, located on an island within the fjord about 20 kilometres away (see ‘Greenland tsunami’). The wave washed away eleven houses, and four people are presumed dead.

The slide was so large that it generated a seismic signal suggestive of a magnitude-4.1 earthquake, confounding initial efforts to identify its cause, says Trine Dahl-Jensen, a seismologist at the Geological Survey of Denmark and Greenland. But more careful examination indicated no significant tectonic activity just before the landslide.

A research team that visited the site earlier this month found that a large volume of rock had plunged — probably spontaneously — from one of the steep sides of the fjord into the water 1,000 metres below, and shattered chunks of a glacier. That disturbance pushed water levels up by more than 90 metres along the coastline on the same side as the slide. And although the tsunami dissipated quickly as it crossed the deep, six-kilometre-wide fjord, it still had enough energy to send water 50 metres up the hillside opposite. The team also measured an increase in water levels of about 10 metres on shorelines 30 kilometres away.

“Landslide-generated tsunamis are much more locally limited than tsunamis produced by sea quakes, but they can be massively tall and devastating in the vicinity,” says Hermann Fritz, an environmental engineer at the Georgia Institute of Technology in Atlanta who led the research team.

Greenland once lost nearly all its ice — and could again

Fritz and his team hope to produce a 3D reconstruction of the Greenland event.

Such information is sorely needed, says Costas Synolakis, a tsunami researcher at the University of Southern California in Los Angeles who was not involved in the Greenland survey. In cold, glacial regions, rocks and ice are held together on steep rock sides, and rising temperatures could make these slopes unstable and these events more common.

Synolakis says that his team has documented in detail only two landslides near glaciers. “We need at least ten such events to be able to have some rudimentary confidence in landslide computational models to study future impacts and establish early warning criteria.” 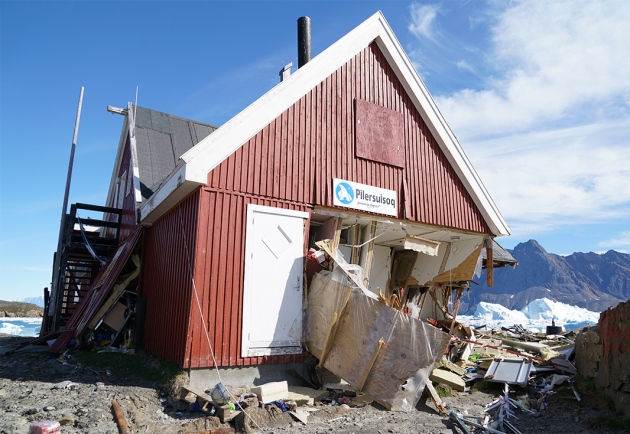 The tsunami wreaked havoc on the small village of Nuugaatsiaq, located on an island within a fjord.

Researchers have noted another potentially imminent landslide in the Karrat Fjord, says Fritz, where a slow trickle of rocks could turn into abrupt slide. Residents of three villages in the region have been permanently evacuated to the nearby town of Uummannaq.

Fritz adds that the Greenland event is reminiscent of a 1958 tsunami — the tallest ever recorded1 — in Lituya Bay, Alaska. A magnitude-8.3 quake triggered a landslide into a narrow fjord and the bay’s shallow water, causing the water to rise 500 metres above the normal tide level (a measure known as run-up). By comparison, the 2011 quake-triggered tsunami in Japan, which killed more than 16,000 people and caused the Fukushima nuclear disaster, reached only about 40 metres at its maximum height.

And in 2015, a landslide-generated tsunami in the Taan Fjord in Icy Bay, Alaska, caused a 300-metre run-up of water, says Synolakis.

“Earlier, we didn’t really believe such extremes were possible,” he says. “But with global warming and sea level rise, such landslides are going to be far more common.”

An earlier version of the map included an incorrect scale bar.