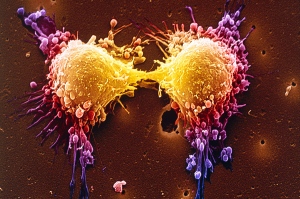 A wealth of new information on genes associated with certain types of cancers — including that of the prostate, here pictured in the process of cell division — still won't enable doctors to predict who will develop the disease.

One of the largest cancer genetics studies ever conducted adds a wealth of information about the disease, but also highlights continuing difficulties with predicting cancer risk.

Researchers say that the work, conducted through the Collaborative Oncological Gene-Environment Study (COGS), will advance understanding of the biological causes of cancer. However, they caution that they still do not know enough about the cancers included in the study — breast, prostate and ovarian — to predict who will develop the diseases on the basis of genetics alone.

“People are already asking us, ‘Shouldn’t you genotype all people, to determine their individual risk for being diagnosed with these cancers?’,” says Per Hall, coordinator of the COGS, which is today releasing a batch of 13 papers in five journals. “But it’s too early.”

Hall and his colleagues surveyed genetic markers in more than 200,000 people who had already been studied in four previous projects. By pooling these people into a 'mega-consortium', investigators increased their ability to detect common variants called single nucleotide polymorphisms (SNPs) linked to cancer risk. Perhaps thousands of these variants each increase a person’s risk of developing cancer by a very small amount, so very large studies are needed to find them all.

The studies found 74 new SNPs linked to the cancers, doubling the known common risk variants linked to them. It also found that many were linked to more than one cancer.

“This indicates common underlying functional mechanisms at some of these susceptibility loci, and could lead to the identification of common biomarkers and therapeutic targets for intervention across several disease sites,” says geneticist Simon Gayther of the University of Southern California in Los Angeles.

But most of the common genetic risk factors for these cancers remain unknown. The COGS researchers estimate that they can now account for just 28% of the risk of familial breast cancer, 4% of the risk of ovarian cancer and 30% of the risk of prostate cancer1, 2, 3. Just asking whether a woman has any relatives with breast cancer still reveals as much about her risk of developing the disease as would surveying her SNPs.

Perhaps most dismaying is that the deadliest of the three cancers — ovarian — remains the least understood, says geneticist Heidi Auman of the Canary Foundation, a non-profit organization based in Palo Alto, California, that is dedicated to the early detection of cancer. “It's a bit disappointing that these new loci potentially only account for 1% of familial risk,” says Auman, who noted that she was not speaking for the foundation itself.

Nilanjan Chatterjee, a biostatistician at the US National Cancer Institute in Bethesda, Maryland, says that it is unlikely that researchers will ever be able to find every common genetic variant for cancer. Instead, genetic data must be combined with information about other risk factors to identify patients at high risk for the disease.

“We shouldn’t expect that by using a model based on genetics alone, we will be able to develop effective prevention strategies,” Chatterjee said.

Meanwhile, Hall says that more genotyping studies could help to fill the gaps in genetic knowledge, because tumour sequencing is still too expensive. “When we started this study, we thought it would be the last genotyping adventure,” Hall says. “But I think there’s still room for another round.”