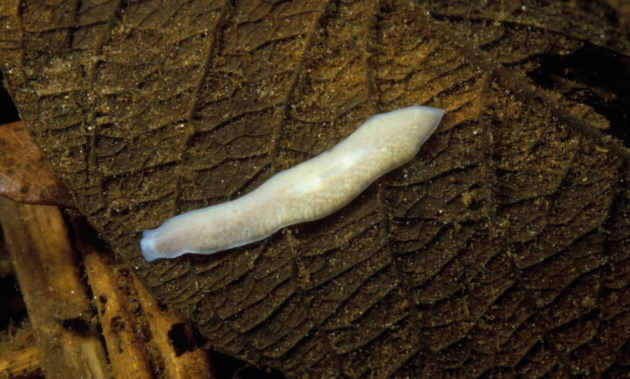 Researchers were able to trigger a latent ability in the milkwhite flatworm (Dendrocoelum lacteum) to regenerate its head from the rear of its body.

Knocking out a single gene can switch on a worm's ability to regenerate parts of its body, even enabling it to grow a new head. The fact that such a simple manipulation can restore healing abilities provides new insight into how the stem cells involved in this process are marshalled in animals.

Some animals, such as salamanders and newts, can regenerate entire body parts, and mice can regrow toes if left with enough nail (see 'How nails regenerate lost fingertips'). Yet other species, including humans, merely produce scar tissue after an amputation. A trio of studies published on Nature’s website today1–3 offers new clues as to what is behind these differences.

All three studies looked at Wnt genes, which code for a series of enzymes that relay information from outside the cell to the nucleus, eventually producing proteins called β-catenins, which regulate gene expression. Wnt genes occur in all animals, but the studies looked at their roles in planarian flatworms. Some planarians can completely regenerate from small body parts such as their tails, whereas other flatworm species have more limited regenerative abilities.

Scientists already knew that the Wnt genes are expressed in a gradient along the worms' bodies — from high at the tail to low at the head — and suspected that the genes were involved in directing stem cells during healing. In the latest studies, researchers wanted to find out if a lack of Wnt gene expression was responsible for the poorer regenerative abilities in particular worm species.

When these species are sliced apart at a point more than halfway to their tail ends, they can regenerate a tail from the head piece, but the tail section is unable to form a new head. However, if the wound is closer to the head — not more than about one-third of the way from it — then both parts will fully regenerate.

To explain the disparity, Jochen Rink, a molecular biologist at the Max Planck Institute of Molecular Cell Biology and Genetics in Dresden, Germany, sliced a worm called Dendrocoelum lacteum at different positions along its body. He and his team then sequenced RNA from the various wounds1. The researchers found that, in wounds that did regrow heads, genes coding for a series of enzymes involved in the Wnt pathway had their expression turned up. But in the pieces that couldn’t regrow, the Wnt genes “didn’t even twitch”, Rink says.

In the second study2, developmental biologists Phillip Newmark of the University of Illinois at Urbana-Champaign and James Sikes (now at the University of San Francisco in California) found similar roles for Wnt genes in a different species of worm, called Procotyla fluviatilis.

But perhaps most surprisingly, both teams found that by suppressing a gene that regulated Wnt function in their flatworms, they could get chunks of the normally non-regenerative tissue to grow fully functional heads.

“This is a fantastic advert for our field,” says Aziz Aboobaker, a biologist who studies planarian worms at the University of Oxford, UK, but was not involved in any of the studies. “Here’s a scenario where these animals don’t regenerate a brain, and then by knocking out just one gene, it’s possible to rescue that.”

In the third study Yoshihiko Umesono, now at the University of Tokushima in Japan, and colleagues found that in the flatworm Phagocata kawakatsui, another signalling cascade — the extracellular signal-related kinase (ERK) pathway — had a previously unsuspected role in regeneration3.

In an e-mail to Nature, Umesono suggests that the effects of ERK proteins and Wnt proteins counteract each other. If the Wnt pathway dominates then it signals tail growth, but if ERK suppresses its influence then heads can form.

Because Wnt and ERK proteins are present in all animals, Rink suggests that regenerative capacity could exist in many species, but might be in a latent state because it is silenced. Once the silencing is removed, regeneration could reappear, he thinks.

“Sure, that’s a possibility,” says Aboobaker. But he thinks that the implications are broader than just worms regrowing heads.

“What’s happening here is that cells are reading their position in the body and then rebuilding the requisite structures,” Aboobaker says. “That’s also what happens when cells from your liver or kidney replace themselves — if we can understand those processes better, that’s useful.”