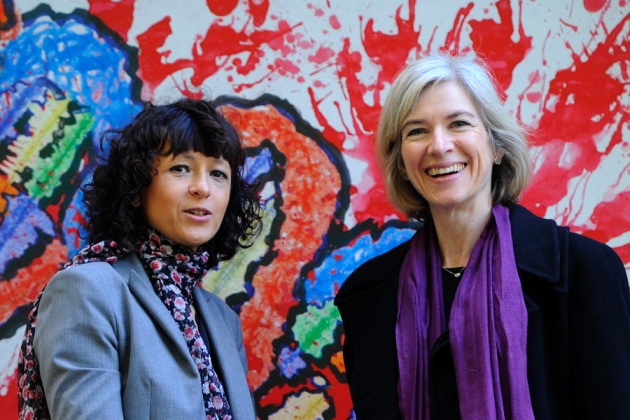 There is no shortage of optimism about the scientific potential of CRISPR–Cas9, a technique that can precisely alter the genomes of everything from wheat to elephants. But there is a great deal of confusion over who will benefit financially from its use.

On 10 March, the US Patent and Trademark Office (USPTO) will begin an investigation into who deserves the patent on using CRISPR–Cas9 to edit genes. This ‘patent interference’ could determine who profits from CRISPR in coming years.

Already, companies have sprung up to take advantage of the technique in agriculture, industrial biotechnology and the treatment of human diseases. One firm, Editas Medicine in Cambridge, Massachusetts, raised US$94 million when it went public on 2 February, even though it does not expect to enter clinical trials until 2017.

Nature takes a look at what the interference proceeding entails and what it could mean for the fate of CRISPR–Cas9.

Who’s who in the patent interference?

One patent claim comes from a team led by molecular biologist Jennifer Doudna at the University of California, Berkeley, and microbiologist Emmanuelle Charpentier, now at Umeå University in Sweden and the Max Planck Institute for Infection Biology in Berlin. They published a 2012 paper demonstrating that the Cas9 enzyme can be directed to cut specific sites in isolated DNA (M. Jinek et al. Science 337, 816–821; 2012), and initiated their patent application on 25 May 2012.

Another team, led by Feng Zhang at the Broad Institute of MIT and Harvard in Cambridge, Massachusetts, published a 2013 paper demonstrating the application of CRISPR–Cas9 in mammalian cells (L. Cong et al. Science 339, 819–823; 2013). Zhang’s team began a patent application on 12 December 2012.

Although the Berkeley team filed first, the Broad team submitted its application to an expedited review programme, and was awarded the patent in April 2014. The Berkeley team then requested a patent interference against the initial Broad patent plus 11 related Broad patents. On 11 January, the USPTO granted Berkeley’s request.

What is a patent interference?

A relic from the past. Until a few years ago, the United States awarded patents to those who could show that they were the first to invent, rather than simply the first to file the patent. Under that system, when competing inventors claimed to have created the same invention first, the USPTO declared an interference proceeding to determine which deserved the patent.

The United States switched to a first-to-file system in March 2013. But several key CRISPR–Cas9 patents were filed before the change.

What will happen during the patent-interference hearing?

A panel of three USPTO patent judges will hear evidence from both sides to establish which team invented the application of CRISPR–Cas9 for gene editing. Much of the action will be carried out over the telephone or through written documents. But there will probably be some oral arguments, and these could include testimony from the academic inventors.

Patent interferences can be highly technical, says John Conley, a legal scholar at the University of North Carolina in Chapel Hill. “It’s hard for me to cite anything more convoluted in the law than this,” he says. “It’s mind-boggling.” The USPTO panel will probably try to determine not only which team was the first to use CRISPR–Cas9 for gene editing, but which conceived of the invention first.

The process could be messy. During the era of ‘first-to-invent’ patents, some companies kept ‘inventor’s notebooks’: when someone at the firm thought of a new invention, they were to write it down in the notebook and have the entry notarized in case it came into play during future patent disputes. Few academic labs go to such lengths.

When will we find out who has won?

The law that did away with the United States’ first-to-file policy also introduced changes intended to expedite interferences. But a verdict on the CRISPR patents could still be months, or even years, away. And given the high financial stakes, many expect the losing party to appeal against the USPTO interference decision, further dragging out the process.

Will this be the only CRISPR patent interference?

Not necessarily. In its filings to the Securities and Exchange Commission, Editas Medicine highlighted a potential interference claim by a Seoul company called ToolGen. Having multiple interferences over the same patent is rare, says Conley, but possible.

Is the patent landscape any clearer in Europe?

No. The Broad and MIT team also fast-tracked several of its applications at the European Patent Office (EPO), and has been awarded several patents so far. Doudna’s single application is pending.

Although the EPO does not have an interference process, outside parties can formally object to a patent. By 11 November 2015, the deadline for objections to the Broad’s first European CRISPR–Cas9 patent, nine parties had come forward — launching an opposition procedure that can take years to resolve.

Once that process is finished, participants can appeal. This adds another four or five years to the clock, says Michael Roberts, a partner at the intellectual-property law firm Reddie & Grose in Cambridge, UK. For this reason, Roberts believes that it will be several years before there is clarity on the earliest CRISPR–Cas9 patents in Europe.