Elephants walk on the world’s biggest platform shoes. Now, John Hutchinson at the Royal Veterinary College in London and his team have found that their footwear also contains hidden stiletto heels.

Even though an elephant’s leg looks like a solid column, it actually stands on tip-toe like a horse or a dog. Its heel rests on a large pad of fat that gives it a flat-footed appearance. The pad hides a sixth toe — a backward-pointing strut that evolved from one of their sesamoids, a set of small tendon-anchoring bones in the animal's ankle. 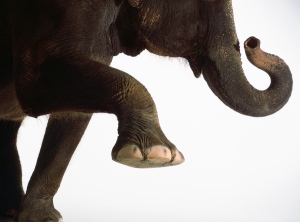 Elephants' feet are not as flat as they appear.

This extra digit, between 5 and 10 centimetres long, had been dismissed as an irrelevant piece of cartilage. Almost 300 years after it was first described, Hutchinson finally confirmed that it is a true bone that supports the squishy back of the elephant’s foot. The ones on the hindfeet even seem to have joints. The study is published in Science1.

Some moles and frogs have similar extra digits, and the giant panda has adapted the same sesamoid bone into a bamboo-grasping ‘thumb’. “The elephant’s toe is basically a panda’s thumb, with the same connections and everything,” says Hutchinson. “It’s a repeated theme in evolution. You turn one of your sesamoids into a functional finger instead of evolving a new one.”

The sixth toe was first described in the eighteenth century2, but it has been largely ignored. “People forgot that this thing was even there and it only came up in specialist papers on elephant anatomy,” says Hutchinson.

This was partly because live elephants are difficult to study. They react poorly to anaesthesia, and their feet are impervious to X-rays and ultrasound at safe intensities. Dissecting cadavers is the only real option. “Fortunately, I have the dubious distinction of having perhaps the world’s largest collection of frozen elephant feet,” says Hutchinson, who has long-standing relationships with several zoos. They send him the feet of elephants that have died or been euthanized, so that he can establish the cause of death, which is often related to foot problems in captive elephants. He now has more than 60 stored in various freezers.

Hutchinson thinks that researchers who dissected elephants in the past missed the sixth toe because it is so deeply embedded in the fat pad. “There are all these weird fibres and compartments, muscles and tendons weaving their way through, and this structure in the middle of it all,” says Hutchinson. “Unless you really cut through carefully and think about the anatomy, it might seem like an odd piece of cartilage.” This is why the extra digit never appears in museum specimens — curators usually throw it away.

Hutchinson and his team studied the toe using computer tomography (CT), electron microscopy, dissection and histology over a period of three years. “We really threw the kitchen sink at the structure,” he says.

Hutchinson found that the extra digit initially develops as rods of cartilage that slowly transform into bone, years after the rest of the bones of the foot have become ossified. By loading the feet with weights inside a CT scanner, they showed that the sixth toe acts as a strut that stiffens the back of the fat pad. It helps the pad to support the elephant’s weight without collapsing down too far. This also explains why the toe gets stronger as the animals gets older and heavier. “It helps us get our heads around the fact that this quite delicate foot is hidden within this great, hulking beast,” says Victoria Herridge, who studies elephant anatomy and evolution at the Natural History Museum in London, and was not involved in the study.

Fossils suggest that the earliest ancestors of elephants had flat feet, with no sixth toes, and their ankles rested on the ground. As the animals evolved into giants, they adopted a tip-toe stance that straightened their legs and better supported their weight. During this change in their posture, one of their sesamoid bones was co-opted into a load-sharing strut.

But Gerald Weissengruber at the University of Veterinary Medicine Vienna says that the paper has “fundamental flaws”. He says that it is unclear if the sixth toe is a sesamoid bone at all, because it has no obvious muscles attached to it as do the panda’s thumb or a human sesamoid.

Weissengruber also points out that Hutchinson mainly looked at captive elephants, which are known to suffer from foot and bone disorders. Disease could have turned cartilage in their foot into bone, and the ‘joint’ in the back toe might just be a fracture. A similar thing often happens to the cartilage in horse's hoofs. Hutchinson acknowledges the problem. “We don’t know how much of the ossification is normal and how much is pathological,” he says. “It would be nice to look at wild elephants.”