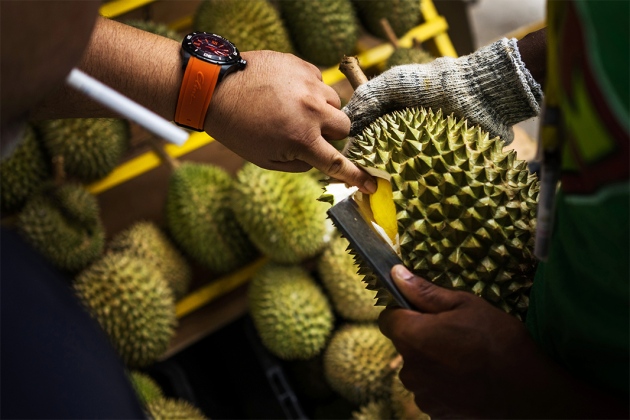 The durian is prized - and hated - for its pungent, sulfury smell.

Some people adore it; others abhor it. Now, the tropical durian (Durio zibethinus ) has had its genome sequenced — and the analysis reveals exactly what’s responsible for the fruit’s distinctive stench. The sequence, reported by researchers in Singapore, Malaysia and Hong Kong, should also allow scientists to identify genes involved in disease resistance and drought tolerance, the team says, as well as flavour profiles. This information is important to growers in southeast Asia, where the durian is a major crop.

Although highly popular as a food, the large, spiny, tropical durian is banned from hotels and public transport in Singapore and Malaysia, because of its penetratingly pungent odour. “It has been described as decaying onion-like, rotten eggs, sulfury, and like fried shallots,” says geneticist Bin Tean Teh of the Duke–National University of Singapore (NUS) Medical School in Singapore, whose team published the genome sequence on 9 October in Nature Genetics1. “First-time visitors to the region sometimes confuse it with a gas or sewage leak.”

The team analysed the genome of the Musang King variety of durian, which is considered a delicacy in Malaysia and Singapore. The resulting sequence reveals that D. zibethinus is closely related to the cotton and cacao plants. But it contains more copies of genes involved in the biosynthesis of volatile sulfur compounds, a major component of the durian’s scent. A study of gene expression showed that sulfur- and flavour-related pathways were switched on more strongly in the Musang King when compared with two other varieties, or cultivars, of tropical durian, including the sweeter Monthong type, which is preferred in Thailand.

There are more than 200 different varieties of tropical durian, which command a wide range of prices, and the latest research could help in the development of tests that can reliably distinguish between them, says Ahimsa Campos-Arceiz, a tropical ecologist at the University of Nottingham Malaysia Campus in Semenyih. It could also aid in the cultivation of “new and interesting” variations of the fruit, he says.

The work also showed that levels of smelly sulfur-containing compounds called disulfides that are produced in the fruit increase concomitantly with the expression of ripening genes. In a ripe fruit, the expression of one key sulfur-related gene was more than 2,000 times higher than in other parts of the plant.

Why should this be the case? Campos-Arceiz, whose team published a study2 on 3 October showing that the endangered island flying fox (Pteropus hypomelanus) is an important pollinator of the tropical durian in Malaysia, thinks that it might be to attract specific consumers in the wild. “Durians developed this intense and far-reaching smell as a way to advertise the presence of ripe fruits and attract animals that occur at very low densities in the rainforests,” he says. Pollinated by bats and dispersed by elephants, the durian is “a beautiful example” of cooperation between plant and animal species, he adds.

Besides D. zibethinus, there are at least 30 other Durio species, some edible, some inedible. “Unfortunately, several of these species are endangered,” says cell biologist Patrick Tan, also at Duke–NUS, and a co-author on the sequencing paper. “We hope to work with experts in the region to characterize the genomes of these other species, to protect their biodiversity and gain further insight into these fascinating plants.”