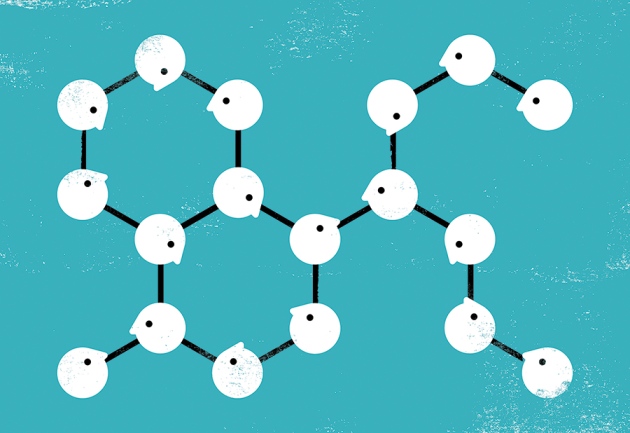 When geneticist Daniel MacArthur checks into his lab, the first thing he does is fire up Slack, a workplace messaging app. In the system, he zips through the hundreds of messages and files left in different channels by the lab's 23 scientists — some reporting on their projects, others requesting help. The lab's members have posted more than 400,000 messages on Slack since April 2014 — a rate of nearly 500 per day. For MacArthur, who works at the Broad Institute of MIT and Harvard in Cambridge, Massachusetts, the tool has rendered irrelevant many of the ways that his lab previously used to communicate about papers and projects — especially e-mail.

E-mail, says MacArthur, is “genuinely awful” and “actually disastrous for group communication”. His inbox, a jumble of vendor announcements, administration notices and other random requests, contains some 17,500 unread items. Slack, by contrast, is focused: because every post comes from a team member, the signal-to-noise ratio is high. Most days, MacArthur is able to clear all unread messages. “I have a lot more discipline making sure I am up to date,” he says.

“It's a remarkably quick way of building consensus.”

MacArthur's lab isn't the only scientific group that swears by Slack, which was launched just 3 years ago, but now boasts more than 3 million active daily users worldwide, and which has rapidly become popular with media organizations and technology firms. Billed as 'team communication for the twenty-first century', Slack is a platform on which groups can share files, data, news and jokes, and generally track their work. It provides base-level free accounts but charges users to store more than the latest 10,000 messages. As MacArthur's lab has done, users can set up their own invitation-only pages — say, at 'mylab.slack.com' — and organize conversations into searchable public or private channels. The platform lends itself to much more informal, and thus easier, communication than e-mail, notes Konrad Karczewski, a geneticist and postdoc in MacArthur's lab. “I'm just typing whatever comes into my head, as if we were having a face-to-face conversation, but online.”

That can be especially valuable for teams that are scattered across work sites or that work different shifts. Guillaume Delbergue, a computer engineer at IMS Bordeaux in France, says he sometimes works in the lab, sometimes from home, and occasionally from another city. Another member of his lab is based in Canada. Using MatterMost — an open-source Slack alternative, which Delbergue chose in order to assuage privacy concerns — those teammates can stay in constant contact. “You can easily bridge people on the shared chat tool,” he says.

Slack doesn't really do anything that other messenging apps cannot in part provide, MacArthur says. It has competitors such as MatterMost and Atlassian's HipChat, as well as older messenging apps such as Google Chat. But a number of labs have fallen in love with Slack; researchers cite its simple and fluid user interface, and its ability to incorporate 'bots': automated scripts (also called plug-ins) that can import outside information into the platform or can launch other software if particular commands are typed.

Here are eight ways that scientists are using Slack in their labs.

Slack figured heavily in MacArthur and his colleagues' preparation of a Nature publication on the ExAC database, which involves some 60,000 human exome sequences (M. Lek et al. Nature 536, 285–291; 2016). The team set up a dedicated channel for the in-development manuscript, allowing the entire group to weigh in on the text and figures. As graphs were generated, they were posted and refined on the basis of comments from the group, typically with five to ten iterations in under an hour, as people used Slack to suggest tweaks in formatting, legend text and statistical approaches. In the end, some 10,000 messages were posted to that channel alone, MacArthur says, and yet the process was still faster than if these changes had been discussed in, say, weekly meetings. “It's a remarkably quick way of building consensus around often pretty complicated and subtle scientific topics, and that was exactly what the ExAC paper was all about,” he says.

Nuclear engineer Clair Sullivan's lab at the University of Illinois in Urbana-Champaign has 28 people actively participating in Slack, including 9 graduate students, a postdoc, several undergraduates and a handful of lab alumni. The Slack is divided into seven channels. There's one for each of the lab's two main projects, channels for the lab's projects on the GitHub file repository and general lab business, a 'random' channel — for jokes or “oh, hey, half-off pizza” — and a channel devoted to the lab's running team. The last channel, Sullivan says, is for conferences — a place for attendees to discuss talks, posters and social outings without clogging other feeds, and to keep interested lab members up to date about what's happening. Another benefit: Sullivan can update her presentations on the go. “I could be in an airplane at 35,000 feet and people are giving me figures for my talk,” she says.

At Ginkgo Bioworks, a synthetic-biology firm in Boston, Massachusetts, each of the company's 100-plus employees uses Slack, mostly for “real-time messaging and real-time updates”. says software engineer Dan Cahoon. The team also uses Slack to monitor instrumentation runs, using a dedicated plug-in, in which messages to a special e-mail address result in posts to a particular Slack channel. The integration requires no special programming, as the company's liquid-handling robots, which form the core of its workflow, already have the ability to send an e-mail when a job status changes. By simply directing those systems to send their messages to the appropriate address, the team can track its jobs through the company Slack. A simple integration thus becomes exceptionally powerful, Cahoon says. “We don't need to write, say, a custom thing that understands what the robot is doing if they provide something that can then just be hooked up this way.”

Slack offers an extensive collection of plug-ins, but researchers can also build their own (see go.nature.com/2htqpgx for a detailed tutorial). Ginkgo Bioworks developers, for instance, created a custom bot that controls keycard-activated doorways in the company offices, to help users who inadvertently leave their ID card on their desk. “They can go into Slack, message the bot, 'open door 27 East, front door,' and then it'll open it for a minute, just like the card,” Cahoon says.

Using the Bonusly plug-in, members of computational biologist Casey Greene's team at the Perelman School of Medicine at the University of Pennsylvania, Philadelphia, can acknowledge colleagues' contributions by awarding points. Suppose one lab member posts a question to a given channel, and another answers it. The questioner can acknowledge that person by typing '/give [amount] [username] [reason] [#hashtag]' in Slack to award points. One lab member won points for encouraging their co-workers to get their flu vaccinations, says Greene (#herdimmunity). Bonusly points are usually used as credit towards a gift card; Greene uses them to buy the lab a free lunch. “It's nice to have a way to thank your peers and have the recognition be shared in our primary Slack channel,” he says.

A number of Slack plug-ins (see go.nature.com/2hifxps for an example) allow labs to manage to-do lists on a per-channel and per-user basis. Nathan Clack, lead software developer at a brain-imaging firm, Vidrio Technologies in Ashburn, Virginia, uses a system that is baked into the programs. Just type '/remind me to check the incubator at 4 pm' and Slack will send a notification at the given time. Users can assign reminders to other team members or entire channels — '/remind @jeff to check the incubator at 4 pm' — and even direct the system to remind them to review a given post in, say, 24 hours. “It's super-useful,” says Clack. “I love that.”

Slack channels are searchable, which makes it easy to bring new lab members — or simply interested lab members working on other projects — up to speed on a particular study, says Gleb Kuznetsov, a PhD student studying genome engineering and bioinformatics in George Church's lab at Harvard Medical School in Boston. Just get them to join the appropriate channel and start reading. It's easier than searching through old e-mails or asking colleagues to forward key message threads, Kuznetsov says. “Whether you're directly involved in the conversation or watching from afar or joining later on, you can get the level of awareness you need.”

From a plug-in that searches the Giphy website for animated gifs matching a given keyword, to an assortment of baked-in and custom emoji — see, for instance, Cult of the Party Parrot, a collection of animated bobbing parrot heads — many labs set up dedicated channels to contain their zaniness. Ginkgo Bioworks has a channel devoted to an offbeat Paul Rudd YouTube skit, called #zany-4D3D3D3. “We call that 'the place for whimsy',” says Cahoon. MacArthur's lab has a #spiders channel — a home for “particularly horrifying” animated spider pics. “I'm not really sure why [the channel] exists,” MacArthur admits — though he allows it could be his comfort with spiders that comes from an Australian upbringing — “but it is a thing that gives me tremendous pleasure every time I look at it, for reasons that I cannot articulate to anyone.”