If the cat in Erwin Schrödinger's famous thought-experiment behaved according to quantum theory, it would be able to exist in multiple states at once: both dead and alive. Physicists' common explanation for why we don’t see such quantum superpositions — in cats or any other aspect of the everyday world — is interference from the environment. As soon as a quantum object interacts with a stray particle or a passing field, it picks just one state, collapsing into our classical, everyday view.

But even if physicists could completely isolate a large object in a quantum superposition, according to researchers at the University of Vienna, it would still collapse into one state — on Earth's surface, at least. “Somewhere in interstellar space it could be that the cat has a chance to preserve quantum coherence, but on Earth, or near any planet, there's little hope of that,” says Igor Pikovski. The reason, he asserts, is gravity.

Pikovski and his colleagues’ idea, laid out in a paper published in Nature Physics on 15 June1, is at present only a mathematical argument. But experimenters hope to test whether gravity really does collapse quantum superpositions, says Hendrik Ulbricht, an experimental physicist at the University of Southampton, UK. “This is a cool, new idea, and I’m up for trying to see it in experiments,” he says. Assembling the technology to do so, however, may take as long as a decade, he says.

How gravity collapses the cat

Cinema-goers who saw the film Interstellar are already familiar with the basic principle behind the Vienna team’s work. Einstein’s theory of general relativity states that an extremely massive object causes clocks near it to run more slowly because its strong gravitational field stretches the fabric of space-time (which is why a character in the film aged only an hour near a black hole, while seven years passed on Earth). On a subtler scale, a molecule placed nearer the Earth’s surface experiences a slightly slower clock than one placed slightly further away.

Because of gravity’s effect on space-time, Pikovski’s team realised that variance in a molecule’s position will also influence its internal energy — the vibrations of particles within the molecule, which evolve over time. If a molecule were put in a quantum superposition of two places, the correlation between position and internal energy would soon cause the duality to 'decohere' to the molecule taking just one path, they suggest. “In most situations decoherence is due to something external; here it’s as though the internal jiggling is interacting with the motion of the molecule itself,” adds Pikovski.

No one has yet seen this effect because other sources of decoherence — such as magnetic fields, thermal radiation and vibrations — are typically much stronger and cause quantum systems to collapse long before gravity becomes an issue. But experimenters are keen to try.

Markus Arndt, an experimental physicist also at the University of Vienna, already tests whether quantum superpositions can be observed for large, though not cat-sized, objects (see Fattening up Schrödinger's cat). He sends large molecules through a matter-wave interferometer, a system that gives each molecule a choice of two different paths. In the classical view, a molecule travels down just one path; a quantum molecule effectively passes through both routes at once and interferes with itself to create a characteristic wave-like pattern (see image, below). 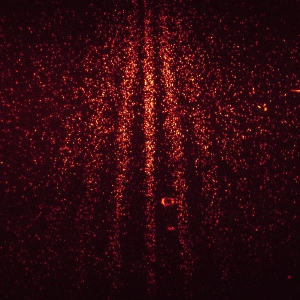 A quantum interference pattern built up from complex molecules known as phthalocyanines.

A similar set up could be used to test for gravity's ability to destroy quantum behaviour: by comparing a vertical interferometer, in which the superposition should soon decohere due to the stretching of time in one path versus the other, with a horizontal set up, where the superposition could remain. Arndt, who has tested the effect for molecules of up to 810 atoms2, points out that large molecules would be good for testing the gravitational effect because they contain lots of particles contributing to internal energy. But not only would the researchers have to further suppress the external environment to reduce other decoherence effects, they would also need to increase the separation of the two paths from micrometres to metres, or else use molecules perhaps 1 million times more massive. "It's certainly very challenging," says Arndt.

If gravity’s effect does limit quantum behaviour on Earth, tests of quantum reality for large objects may eventually have to move into space, says Angelo Bassi, a physicist at the University of Trieste in Italy. "But from a deep, fundamental point of view, this is nothing new," he says. A gravitational field is merely another environment to interact with, so invoking it does not explain whether quantum behaviour might lead to classical reality if gravity’s influence were mitigated — for example, by doing the experiment in gravity-free space.

Nor does the effect described by Pikovski and colleagues say anything about quantum gravity: a theory that would unite gravity and quantum mechanics in a single description, which many researchers are working towards. “It’s an interesting effect, but it’s still quantum physics applied to classical general relativity. In that way it doesn’t change our picture of the world,” adds Bassi.