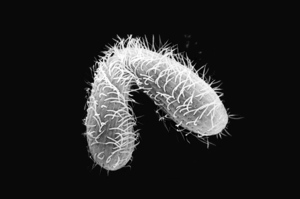 The ASSET Program at Cornell University

When two single-celled Tetrahymena thermophila mate — as seen in this scanning electron microscope view — the offspring randomly ends up with any of seven possible sexes.

Biologists have uncovered the genetic mechanisms by which an unusual microbe assumes one of seven possible sexes.

Scientists have known since the late 1930s that the protozoan Tetrahymena thermophila can belong to any of seven sexual reproductive groups, or ‘mating types’. Each mating type can reproduce with any of the other six, but not with its own type.

A study published in PLoS Biology1 has found that the DNA of every mating type is present in the organism. During sexual reproduction, segments of DNA are deleted until just one mating type is expressed in the progeny.

It was known that “the mating type of the parents has no influence on what the mating type of the progeny is going to be,” says study co-author Eduardo Orias, a molecular biologist at the University of California in Santa Barbara. “That was interesting and surprising from the moment it was discovered.” What was unknown was why.

Tetrahymena are rare among single-celled organisms in having two nuclei. The germline nucleus, like testes and ovaries in humans, contains the genetic information that will be passed on to offspring. The somatic nucleus holds the ‘working copy’ of the organism’s genome, which governs the cell’s behaviour and determines its mating type.

Every Tetrahymena cell in the study had the same genome in its germline nucleus. That genome, the researchers discovered, contains incomplete genes that correspond to mating types. When two organisms mate, the combined fragments contain all the information necessary to encode any of the seven mating types in their offspring. This DNA is then delivered to the newly formed somatic nucleus of the offspring. The DNA is then rearranged and parts of it are deleted through a random process until there is only enough information to express one mating type.

The array of genes is “like a bracelet made of links”, Orias says. “You’re removing a link out of the system until you get down to the last link and you cannot remove any more.”

Aaron Turkewitz, a cell biologist at the University of Chicago in Illinois who was not involved in the study, says that this research is the culmination of a long effort to understand the confusing genetic data of Tetrahymena. He says that the exact mechanism underlying the DNA-winnowing process is still unclear, which “leaves us with these wonderful mysteries at the mechanistic level”.