In the hostile environment of a bubbling volcanic hot spring, a team of researchers at Portland State University in Oregon has discovered a new viral genome that seems to be the product of recombination between a DNA virus and an RNA virus — a natural chimaera not seen before. Their findings appeared on 19 April in the journal Biology Direct.

“It’s a mythological beast of a virus, but it actually exists,” says virologist Ken Stedman, who coauthored the study. 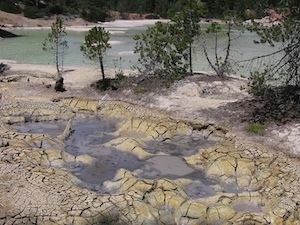 Image via Wikipedia under Creative Commons

In the bacterial communities that populate the acidic waters of Boiling Springs Lake in northern California’s Lassen Volcanic National Park, “viruses are the only predators”, Stedman says. To get a better handle on what types of viruses are present there, he and his colleagues performed a metagenomic analysis of hundreds of thousands of viral sequences from a lake sample. The results included something unexpected: a piece of DNA coding for a protein that until now has only been seen in the capsid or ‘head’ of RNA viruses. By comparing the sequence with those of other genetic fragments, they were able to arrive at a complete viral genome. In the genome, the RNA-like sequence sat adjacent to another sequence for a replication protein that is unique to DNA viruses.

The resultant single-stranded circular genome, dubbed BSL RDHV (short for Boiling Springs Lake RNA–DNA hybrid virus), seems to be the result of a recombination event between two completely unrelated virus groups. The RNA gene did not come from a virus that could produce reverse transcriptase, the enzyme required to change RNA into DNA, so it’s unclear how the RNA gene ended up in the DNA genome. “We have no idea how it happened, but we know it happened,” says Stedman.

Stedman suggests two possible explanations. In one scenario, an RNA virus, a DNA virus and a retrovirus infected the same cell at the same time; the retrovirus used its reverse transcriptase enzyme to translate the RNA gene into a DNA copy, which got lumped in with the DNA virus genome. Such a scenario might also work if there was free-floating reverse transcriptase present in the environment. Alternatively, a special kind of viral ligase protein — which glues nucleic acids together — may have joined the dissimilar DNA and RNA strands, with the resultant hybrid code then replicated into DNA. Both scenarios are possible, if a bit far-fetched, says Stedman.

To see whether similar viruses exist in other environments, the team screened the Global Ocean Survey’s sequence database, and found three virus sequences containing the same two genes. “There were lots of cases that matched the sequence for either the DNA protein or the RNA protein, so there could actually be quite a few out there,” says Stedman. “But we can’t link them together, so we can’t say for sure.”

Metagenomic analyses can give researchers a picture only of the virus’s genome, not the virus itself or its host. “The downside of the approach is that little can be inferred about the biology of viruses discovered in environmental samples,” says Cédric Feschotte, an evolutionary geneticist at the University of Texas at Arlington. “It is unclear whether these viruses are good representatives even of their own group of viruses.” Stedman acknowledges these limitations, and now plans to investigate these questions with further sampling.

But, the fact that the unique virus exists suggests that recombination can happen between lineages that diverged billions of years ago. “It has been hypothesized that a key aspect of the earliest stages in the evolution of genetic systems involved rampant recombination and fusion between small, diverse — to the point of having different strategies of replication and expression — virus-like genetic elements,” says Eugene Koonin, an evolutionary geneticist at the National Institutes of Health in Bethesda, Maryland. “Stedman’s findings show that such recombination between diverse viruses indeed takes place and could be an important route of virus evolution.”

“The discovery of an apparent hybrid between DNA and RNA viruses blurs the traditional boundaries between two major viral groups, further highlighting the plasticity of the viral world and the seemingly unlimited possibilities of chimaerism among viral entities,” says Feschotte. If so, there could be more chimeras out there, just waiting for virologists to find them.