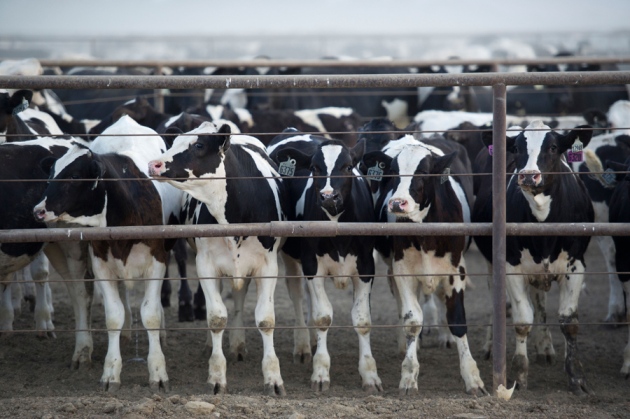 The vast amounts of steroids that are fed to cattle in some countries end up in farm run-off and may affect the environment even after they are broken down by sunlight.

Hormone-disrupting chemicals may be far more prevalent in lakes and rivers than previously thought. Environmental scientists have discovered that although these compounds are often broken down by sunlight, they can regenerate at night, returning to life like zombies.

“The assumption is that if it’s gone, we don’t have to worry about it,” says environmental engineer Edward Kolodziej of the University of Nevada in Reno, joint leader of the study. “But we’re under-predicting their environmental persistence.”

“Risk assessments have been built on the basis that light exposure is enough to break down these products,” adds Laura Vandenberg, an endocrinologist at the University of Massachusetts in Amherst who was not involved in the study. “This work undermines that idea completely.”

Endocrine disruptors — pollutants that unbalance hormone systems — are known to harm fish, and there is growing evidence linking them to health problems in humans, including infertility and various cancers1. But pinpointing specific culprits from the vast array of trace chemicals in the environment has proved difficult. Indeed, concentrations of known endocrine disruptors in rivers often seem to be too low to explain harmful effects in aquatic wildlife, says Kolodziej.

He and his colleague David Cwiertny, an environmental engineer at the University of Iowa in Iowa City, decided to find out whether the breakdown products of endocrine disruptors could be boosting their environmental impact. Their team focused on trenbolone acetate, a synthetic anabolic steroid used as a growth promoter in more than 20 million cattle in the United States each year (this practice is banned in the European Union).

Cattle metabolize the steroid into compounds such as 17α-trenbolone, a potent endocrine disrupter commonly found in agricultural run-off water. In laboratory tests, just a few tens of nanograms of these compounds per litre can skew sex ratios and decrease fertility in fish2, 3. Some manufacturers have argued that these metabolites pose little risk in rivers, however, because sunlight breaks them down rapidly.

Kolodziej and his team put solutions of 17α-trenbolone and related compounds through several cycles of light and dark in the laboratory. Although concentrations fell during the simulated daytime, the scientists were surprised to see that levels rebounded during the dark periods. At neutral pH and 25 ºC, it took about five days to regenerate 60% of a sample of 17α-trenbolone from its breakdown products. Higher temperatures or slightly acidic or alkaline conditions accelerated this process.

“I’ve never seen anything like it,” says Vandenberg. Field biologists usually collect water samples during the day, she says, and nocturnal regeneration “would certainly have the potential to impact those results.” Moreover, field studies have rarely reported the pH and temperature of water samples, which could have a big effect on true concentrations of contaminants. “I don’t think that anyone had conceived it could be so important,” she says.

The team found the same regeneration process occurring in water samples taken from the Iowa River, and from a test pond seeded with manure from cattle that had been treated with trenbolone acetate. They also note that other steroids with similar chemical structures can regenerate in the same way, including dienogest, an oral contraceptive, and dienedione, an illicit anabolic steroid. The results are published in Science4.

Kolodziej says that the work casts considerable uncertainty over sampling results for steroid endocrine disruptors, and suggests that a survey of their breakdown compounds in the environment is now urgently needed.

It also highlights a serious drawback in relying on studies that look for single environmental contaminants, rather than a spectrum of their derivatives, he adds. Chemical studies should be complemented with bioassays that use living cells to detect endocrine disruptors, Vandenberg adds.

Last year, a bioassay of this kind found androgens in 35% of freshwater samples tested, far more than chemical assays would suggest5. “What you really want to know is if there’s anything in there that can cause biological activity,” says molecular biologist Gordon Hager, at the National Cancer Institute in Bethesda, Maryland, who developed the assay. Yet current environmental monitoring procedures still rely on checking “a list of chemicals, and they only know how to look for one thing at a time”, he says. “It’s a fool’s errand.”