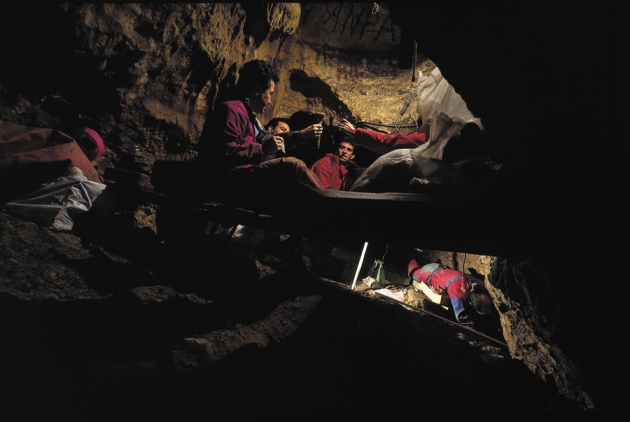 A dig at the Sima de los Huesos cave in Spain, the site of ancient hominin fossils.

Another ancient genome, another mystery. DNA gleaned from a 400,000-year-old femur from Spain has revealed an unexpected link between Europe’s hominin inhabitants of the time and a cryptic population, the Denisovans, who are known to have lived much more recently in southwestern Siberia.

The DNA, which represents the oldest hominin sequence yet published, has left researchers baffled because most of them believed that the bones would be more closely linked to Neanderthals than to Denisovans. “That’s not what I would have expected; that’s not what anyone would have expected,” says Chris Stringer, a palaeoanthropologist at London’s Natural History Museum who was not involved in sequencing the femur DNA.

The fossil was excavated in the 1990s from a deep cave in a well-studied site in northern Spain called Sima de los Huesos (‘pit of bones’). This femur and the remains of more than two dozen other hominins found at the site have previously been attributed either to early forms of Neanderthals, who lived in Europe until about 30,000 years ago, or to Homo heidelbergensis, a loosely defined hominin population that gave rise to Neanderthals in Europe and possibly humans in Africa.

But a closer link to Neanderthals than to Denisovans was not what was discovered by the team led by Svante Pääbo, a molecular geneticist at the Max Planck Institute for Evolutionary Anthropology in Leipzig, Germany.

Svante Pääbo talks to Ewen Callaway about the hominin DNA

The team sequenced most of the femur’s mitochondrial genome, which is made up of DNA from the cell’s energy-producing structures and passed down the maternal line. The resulting phylogenetic analysis ­— which shows branches in evolutionary history — placed the DNA closer to that of Denisovans than to Neanderthals or modern humans. “This really raises more questions than it answers,” Pääbo says.

The team’s finding, published online in Nature this week (M. Meyer et al. Nature http://dx.doi.org/10.1038/nature12788; 2013), does not necessarily mean that the Sima de los Huesos hominins are more closely related to the Denisovans, a population that lived thousands of kilometres away and hundreds of thousands of years later, than to nearby Neanderthals. This is because the mitochondrial genome tells the history of just an individual’s mother, and her mother, and so on.

Nuclear DNA, by contrast, contains material from both parents (and all of their ancestors) and typically provides a more accurate overview of a population’s history. But this was not available from the femur.

With that caveat in mind, researchers interested in human evolution are scrambling to explain the surprising link, and everyone seems to have their own ideas.

Pääbo notes that previously published full nuclear genomes of Neanderthals and Denisovans suggest that the two had a common ancestor that lived up to 700,000 years ago. He suggests that the Sima de los Huesos hominins could represent a founder population that once lived all over Eurasia and gave rise to the two groups. Both may have then carried the mitochondrial sequence seen in the caves. But these mitochondrial lineages go extinct whenever a female does not give birth to a daughter, so the Neanderthals could have simply lost that sequence while it lived on in Denisovan women.

“I’ve got my own twist on it,” says Stringer, who has previously argued that the Sima de los Huesos hominins are indeed early Neanderthals (C. Stringer Evol. Anthropol. 21, 101–107; 2012). He thinks that the newly decoded mitochondrial genome may have come from another distinct group of hominins. Not far from the caves, researchers have discovered hominin bones from about 800,000 years ago that have been attributed to an archaic hominin called Homo antecessor, thought to be a European descendant of Homo erectus. Stringer proposes that this species interbred with a population that was ancestral to both Denisovans and Sima de los Huesos hominins, introducing the newly decoded mitochondrial lineage to both populations (see ‘Family mystery’).

This scenario, Stringer says, explains another oddity thrown up by the sequencing of ancient hominin DNA. As part of a widely discussed and soon-to-be-released analysis of high-quality Denisovan and Neanderthal nuclear genomes, Pääbo’s team suggests that Denisovans seem to have interbred with a mysterious hominin group (see Nature http://doi.org/p9t; 2013).

The situation will become clearer if Pääbo’s team can eke nuclear DNA out of the bones from the Sima de los Huesos hominins, which his team hopes to achieve within a year or so.

Obtaining such sequences will not be simple, because nuclear DNA is present in bone at much lower levels than mitochondrial DNA. And even obtaining the partial mitochondrial genome was not easy: the team had to grind up almost two grams of bone and relied on various technical and computational methods to sequence the contaminated and damaged DNA and to arrange it into a genome. To make sure that they had identified genuine ancient sequences, they analysed only very short DNA strands that contained chemical modifications characteristic of ancient DNA.

Clive Finlayson, an archaeologist at the Gibraltar Museum, calls the latest paper “sobering and refreshing”, and says that too many ideas about human evolution have been derived from limited samples and preconceived ideas. “The genetics, to me, don’t lie,” he adds.

Even Pääbo admits that he was befuddled by his team’s latest discovery. “My hope is, of course, eventually we will not bring turmoil but clarity to this world,” he says.