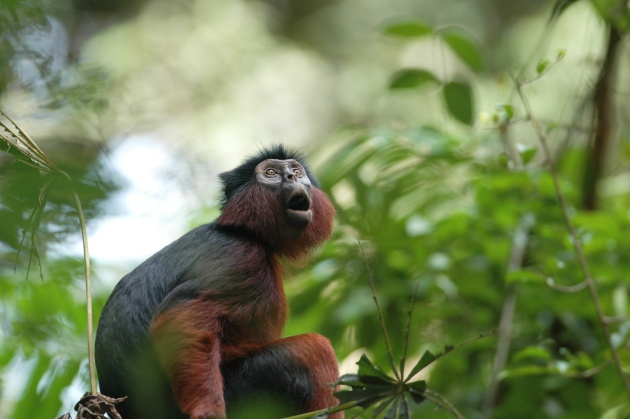 Inza Koné, a primate conservationist at the Swiss Centre for Scientific Research in Abidjan, Côte d’Ivoire, is used to overcoming adversity. During the country’s bloody civil war in the 2000s, he and his colleagues managed to keep research going in conflict zones, even after most international scientists had fled, because of long-standing ties with communities in these areas. In the country’s Taï National Park — one of the last vestiges of primary rainforest in West Africa — such relationships allowed long-running studies of chimpanzees and monkeys to continue safely, and largely spared the park from poaching.

As the first president of the African Primatological Society (APS), launched at a congress near Abidjan on 24–26 July, Koné will lead another hard task: training a generation of home-grown primate researchers. The aim is for them to start and lead efforts such as the Taï Chimpanzee Project — established in 1979 by researchers from Germany’s Max Planck Institute for Evolutionary Anthropology in Leipzig — and to gain the institutional buy-in needed to protect Africa’s 200 or so species of apes, monkeys and lemurs.

Few primate-research and conservation efforts are currently led by Africans, and those run by scientists from elsewhere don’t usually last long enough to make a difference, notes Inaoyom Imong, director of the Cross River Gorilla Landscape Project in Nigeria. “Greater involvement in and leadership of primate-conservation projects by Africans has the potential to ensure the necessary long-term commitment to sites, stronger local ownership and sustainability of such projects.”

Continental Africa has an estimated 111 species of primate, with the greatest diversity in the Democratic Republic of the Congo, Tanzania, Cameroon, Nigeria and Equatorial Guinea. Another 103 species are found in Madagascar, an island nation and biodiversity hotspot.

But many African primate species are at risk of extinction: 37% of species on the mainland and 87% of species in Madagascar are listed as threatened. This is largely a result of habitat loss caused by human activities, such as large-scale farming and logging, as well as overhunting of bushmeat.

The APS’s scientific congress will be an annual event. The first meeting brought together around 100 African primatologists and conservation biologists from across the continent, and some 30 non-Africans. “For African primatology to get its own society is tremendously important,” says Roman Wittig, a primatologist at the Max Planck Institute for Evolutionary Anthropology. “It’s a milestone.”

Most primate research and conservation in Africa over the past half-century has been done by overseas researchers, says Russell Mittermeier, vice-president of the non-profit environmental organization Conservation International in Arlington, Virginia, who attended the launch. “But the job is too big to continue in this way,” he adds. “We need a large community of African primatologists working in their own countries and helping to train new generations of specialists.”

That’s already starting to happen, says Wittig, who is co-director of the Taï Chimpanzee Project. “There is now a crop of well-trained African researchers who are taking the lead,” he says. Koné, who is involved in the Taï chimp study and a project with Western scientists focused on the national park’s monkeys, says that having local researchers as partners benefits international conservation efforts. “Local communities and decision-makers will be more sensitive to messages from nationals working in synergy with expats.”

“We can bring many more people to work on primate conservation in their own backyards.”

Although the prospects look bleak for primates in many parts of Africa, no species are yet believed to have gone extinct, says Wittig. But it will not be possible to rapidly solve major challenges such as habitat loss, so long-term planning is needed. Sustaining research and conservation in national parks is one of the best ways to protect vulnerable primate populations, he adds.

The biggest challenges facing African primatology are the lack of training and expertise for the continent’s researchers, says Rachel Ikemeh, principal investigator of the SW/Niger Delta Forest Project in Abuja, Nigeria, and a driving force behind the APS’s establishment. The society will therefore focus on training African scientists to start conservation efforts and to lead research projects.

“Increasing the roles and responsibilities of Africans is paramount, if we consider that Africans are essentially the main custodians of primates occurring within their natural habitat across the continent,” says Ikemeh, who saw plenty of future leaders in primate conservation and research at the congress.

For funding agencies, it can be more cost-effective to support nationals in countries with primate populations than to employ international researchers, says Mittermeier. “We can bring many more people to work on primate conservation in their own backyards.”

Mittermeier points to Brazil, a world leader in primatology, as an example of what can be achieved. Since its creation in 1979, the Brazilian Society of Primatology has spurred research and conservation efforts, supported hundreds of Brazilian primatology PhD students and helped to build extensive networks among non-governmental organizations, universities and government, he says. “Now is the time for Africa.”