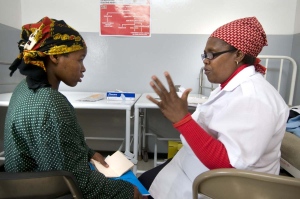 An article by SciDev.Net

[BOSTON] A low number of women participating in clinical trials of HIV/AIDS vaccines in developing countries is continuing to frustrate scientists' efforts to tell whether they are effective in protecting women.

On average, only about a fifth of the participants in phase I and II HIV vaccine trials in most sites in Africa are women, yet they bear a bigger burden of the epidemic, the AIDS Vaccine 2012 conference heard this week in Boston, United States (9–12 September).

"We could end up with a vaccine that we can only say elicits a good immune response in men," said Hannah Kibuuka, director of the Makerere University Walter Reed Project (MUWRP), an HIV vaccine development group in Uganda. "We will not know if it works equally well in women."

More women than men are infected with HIV, they have a higher viral load and their immune response could be different.

Merlin Robb, clinical deputy director of the US Military HIV Research Program, said that although African women attend screening, they tend not to enrol in trials.

One reason, he said, is that trials require women to use contraceptives and not fall pregnant, but most women eligible for trials are usually within the reproductive age.

They may also be more influenced than men by their peers, and many live in societies where they have to seek consent from their partners and parents to take part in a trial, Robb said.

Danielle Poole, a researcher who has worked on human papillomavirus (HPV) vaccine trials in Mali, added evidence about barriers to consent. Most of the women, even adults, said they had to get consent from their parents or parents, and most were not willing to participate in HPV trials.

"If it were an HIV vaccine site, I would imagine it would be very similar because both are sexually transmitted diseases," Poole said.

The high number of necessary visits to health centres by women participating in trials may also be an obstacle. For instance, women who participated in the CAPRISA 004 microbicide trial in South Africa had to make 22 visits to the site, and undergo seven internal examinations, in 18 months, researchers said.

The conference was attended by more than 1,100 researchers, funders and policymakers and included more than 440 presentations on the latest in HIV vaccine research.