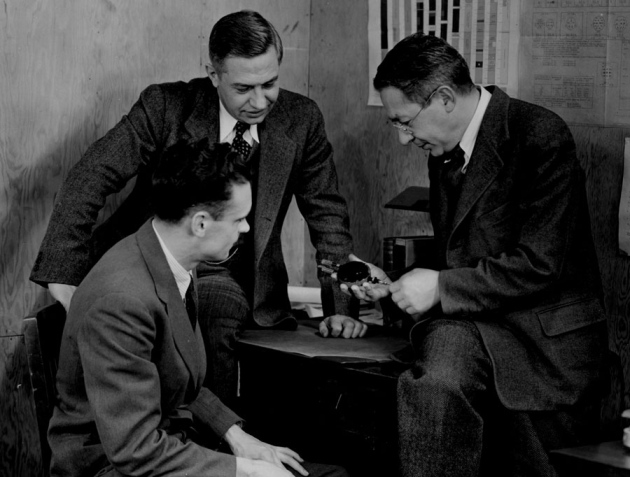 Physicists Edward Bowen (left), Lee DuBridge (centre) and I. I. Rabi work on a cavity magnetron in the 1940s.

On 17 October 1940, Karl Compton, president of the Massachusetts Institute of Technology (MIT) in Cambridge, made a hasty telephone call from Washington DC to a colleague back on campus. Could MIT spare some modest space to host an urgent, top-secret defence project? After making some quick assessments, Compton's assistant reported that MIT could shuffle some other laboratories to accommodate the facility. With that phone call, the Radiation Laboratory, or 'Rad Lab', was born. The laboratory had an enormous impact on the course of the Second World War. Arguably, its impact on science was even greater.

Within weeks of Compton's call, a skeleton staff at the Rad Lab was hard at work trying to improve on a British-designed cavity magnetron, which they hoped could become the centrepiece of a type of short-wavelength radar. When the laboratory began operation — more than a year before the United States entered the Second World War — the staff consisted of 20 physicists, three security guards, two stockroom clerks and a secretary. By the war's end, the lab had swollen to 4,000 people and was managing development contracts worth US$1.5 billion (nearly $20 billion in 2013 dollars)1.

The Allied nuclear-weapons project, code-named the Manhattan Project, grew even faster. Again building on early insights from a British team, the Manhattan Project, coordinated from the Los Alamos laboratory in New Mexico, ballooned to encompass 125,000 people working at 31 facilities across North America. By the time the atomic bombs were dropped on Hiroshima and Nagasaki in August 1945, the project had cost $1.9 billion (about $25 billion today)2. Together, the radar and atomic-bomb projects amounted to about 1% of US military expenditure during the war: modest on the scale of defence appropriations, but utterly unprecedented for the academic scientists and engineers caught up in the war projects.

And it was more than just the budgets that grew. In both projects, physicists, chemists, metallurgists and their colleagues found themselves working in huge groups with larger-than-life equipment. Isotope-separation plants in Oak Ridge, Tennessee, stretched the length of a city block; the nuclear-reactor facilities in Hanford, Washington, required more than half a billion cubic metres of concrete.

After the war, many physicists dismissed their work on such sprawling wartime projects as temporary distractions: an important but limited hiatus from their 'real' scientific research. One Rad Lab veteran even composed a song soon after the war closing with the memorable line, “Oh, dammit! Engineering isn't physics, is that plain? Take, oh take, your billion dollars, let's be physicists again”.3

Despite the songwriter's plea, scientists did not return to the antebellum status quo. Instead, many characteristics of the wartime projects became the new normal, even in peacetime. The war cast a long shadow on how science is organized and funded, and even on the methods and questions that many scientists pursued throughout their careers.

Until the war, most scientific research in the United States had been supported by private foundations, local industries and undergraduate tuition fees. After the war, scientists experienced a continuity — even an expansion — of the wartime funding model. Almost all support for basic, unclassified research (as well as for mission-oriented defence projects) came from the federal government. 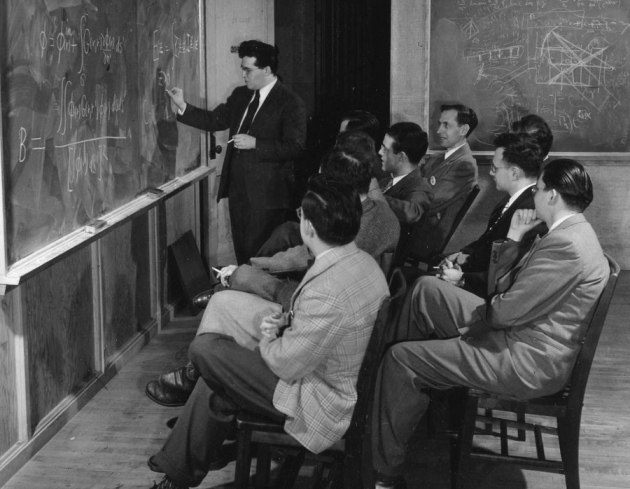 Much of the work was conducted in institutions modelled on wartime examples. Defence projects during the war had thrown together experts from many different fields of science and engineering to work towards common objectives, rather than grouping specialists by disciplines. The enormous time pressures and shared goals of war work forced scientists and engineers to craft effective means of communicating with each other. Mathematical rigour and abstruse theoretical derivations were worth little if colleagues from other specialities could not build on the results.

Veterans of the intense, multidisciplinary wartime projects came to speak of a new type of scientist. They touted the war-forged 'radar philosophy' and the quintessential 'Los Alamos man': a pragmatist who could collaborate with everyone from ballistics experts to metallurgists, and who had a gut feeling for the relevant phenomena without getting lost in philosophical niceties5.

Leading scientists and policy-makers actively sought to continue the wartime spirit of collaboration across disciplines. The Atomic Energy Commission oversaw a new network of national laboratories to pursue both civilian and defence research. The labs featured interdisciplinary teams that mixed physicists, mathematicians and chemists with engineers of many stripes6. A similar set-up appeared across dozens of US universities: facilities straddling several academic departments, such as the Research Laboratory for Electronics and the Laboratory for Nuclear Science and Engineering, both founded at MIT by the end of 1945 (ref. 7).

The facilities hummed with surplus equipment and know-how culled from the wartime projects. Physicist Bruno Rossi, for one, studied cosmic rays after the war by adapting the sensitive timing circuits he had built at Los Alamos to measure nuclear-fission rates5.

Similarly, just months after the end of hostilities, self-described 'boffins' who had spent the war working on radar turned their attention to the impossibly small and the cosmically large. Some began to build radio telescopes and aimed them at the heavens. An international community coalesced, linking the Jodrell Bank telescopes near Manchester, UK, and the Parkes telescope in New South Wales, Australia, to similar instruments dotted across North America — from the California Institute of Technology in Pasadena to the National Radio Astronomy Observatory in Green Bank, West Virginia8. And in 1947, using repurposed microwave-frequency electronics left over from his wartime radar work, physicist Willis Lamb of Columbia University in New York measured a tiny shift — of about one part in a million — in the energy levels of an electron in the 2s and 2p orbitals of a hydrogen atom. Lamb's remarkable achievement challenged physicists' prevailing understanding of the vacuum — the mysterious state of lowest-possible energy9. 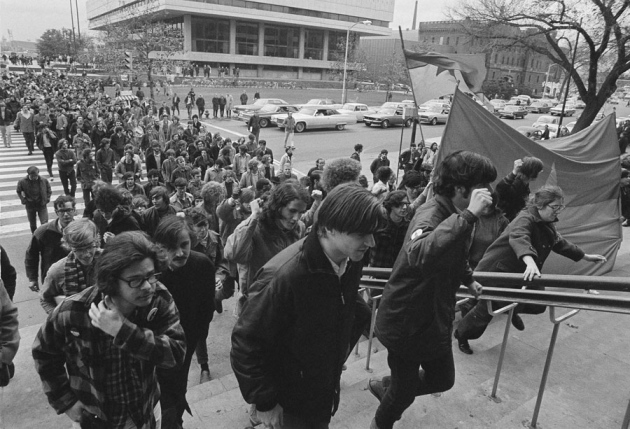 Students protest against military research at the Massachusetts Institute of Technology in 1969.

One of the first to hear about the Lamb shift was physicist Julian Schwinger, who before the war had been a rising star in quantum theory. Like so many physicists at the Rad Lab, Schwinger had been forced to rethink his approach to calculation. Elegant derivations from first principles — which often proved tractable only when applied to idealized situations — were of little value to the many colleagues who needed to fine-tune electronics components for maximum efficiency. Instead, as Schwinger himself later recalled, he internalized from the engineers a modular, 'effective circuit' approach. Rather than calculate the total electrical resistance of a complicated component from the lofty heights of Maxwell's equations, he could 'blackbox' each component, substituting its overall resistance as determined from measurements of inputs and outputs. The niceties of how current flowed between constituent parts of a given component mattered much less to the main objective — improving radar designs — than did the effect of that component in a given circuit5, 9.

Schwinger approached the Lamb shift with his Rad Lab lessons still fresh. Since the 1930s, senior theorists had tried to calculate the effects of subtle quantum fluctuations from first principles. Maddeningly, their equations always broke down, producing unphysical infinities instead of finite answers. Schwinger rearranged his equations in terms of measurable inputs and outputs, just as his engineering colleagues at the Rad Lab had done with real-world electronics. By recasting the calculation, Schwinger managed to calculate the effects of quantum fluctuations on the electron's energy levels and obtain an answer that matched Lamb's measurement to an extraordinary precision. As it turned out, Japanese physicist Sin-Itiro Tomonaga had accomplished the same goal a few years earlier. Tomonaga's work on radar during the war had proven similarly essential to his theoretical approach5, 9.

This war-forged pragmatism produced enormously impressive research and influenced a generation of leading scientists. Their approach to basic research — and the institutions in which they pursued it — assumed an aura of inevitability. But the approach came with some trade-offs, largely unnoticed at the time. Important questions that resisted the powerful, phenomenological methods tended to get eclipsed. Anything that smacked of 'interpretation', or worse, 'philosophy', began to carry a taint for many scientists who had come through the wartime projects. Conceptual scrutiny of foundations struck many as a luxury. The wartime style was reinforced in the United States by exponentially rising university enrolments after the war. The new classroom realities left little space for informal discussion of philosophy or foundations. The Rad Lab rallying cry of “Get the numbers out” shaded into “Shut up and calculate!”10

By the mid-1960s, three-quarters of each year's crop of physics PhD graduates in the United States specialized in either nuclear physics or solid-state physics: two important and interesting areas, to be sure, but also those most readily funded by defence agencies (even for unclassified, basic research). They were also areas in which most physicists came to agree that a pragmatic style could yield the greatest success. During this period, for example, physicists first understood the nuclear force that causes radioactivity, and conquered strange phenomena such as superconductivity — both Nobel-prizewinning achievements.

Openly philosophical areas of physics, the intellectual roots of which stretched back before the war, became increasingly marginalized, such as grand questions about the birth and fate of the Universe, the thin border between order and disorder in chaotic systems, or the subtle foundations of quantum theory. Sometimes these were denigrated as not even being 'real physics' by influential physicists in the United States, although research in these areas advanced in other parts of the world10.

A quarter of a century after the end of the Second World War, cracks in the system began to show. The escalation of fighting in Vietnam made many people question the dominant place of military funding on university campuses, and difficult economic conditions further drove a rapid reversal of fortunes in the sciences, and in physics in particular. Job opportunities for those with science PhDs fell sharply, and university enrolments quickly followed suit, none more drastically than in physics.

The organization, funding and basic approach to research that had come to seem normal — even inevitable — after the war were no longer taken for granted. Complementary styles of research began to creep back in, and growing numbers of physicists turned to topics that had seemed beyond the pale just a few years earlier, such as cosmology, chaos theory and quantum entanglement10.

Radar philosophy and the Los Alamos man did not disappear from view. To this day, most basic research in the United States depends on federal funding, and many of the great successes of the postwar generation — such as the standard model of particle physics — remain mainstays of research and teaching. But that legacy now sits beside more recent breakthroughs born of the era that reclaimed more openly speculative and philosophical approaches to the deep mysteries of nature.