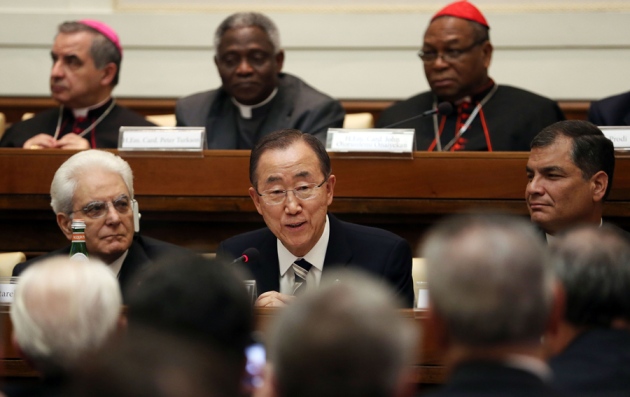 When delegates gather in Paris in December to negotiate an international agreement to fight climate change, United Nations secretary-general Ban Ki-moon hopes to have a powerful ally: the pope.

Ban was one of a number of policy-makers, scientists and leaders from several religions who met on 28 April in a sixteenth-century villa on the Vatican grounds to discuss the moral aspects of global warming and sustainable development. The unusual gathering comes as Pope Francis prepares an encyclical letter to bishops on climate change, for release this summer.

The encyclical “will have a profound impact on climate-change negotiations”, Ban told reporters after a brief audience with the pope, noting that Francis will also address the UN General Assembly on 25 September. Ban warned that climate change is already occurring, and that the world is running out of time to ward off severe and irreversible impacts of warming — a common theme among the scientists who attended the gathering.

But many researchers at the meeting were eager to consider climate change from a different perspective: that of religious leaders who can speak about global warming and its effects with moral authority. These leaders can also reach a huge audience, says Partha Dasgupta, an economist at the University of Cambridge, UK, and an organizer of the meeting. “As academics, we may have graduate students, but we don't have a flock,” he says. “Religious leaders have a flock.”

Meeting participants have been asked to sign a declaration drawn up by a small group of scientists and Bishop Marcelo Sánchez Sorondo, the chancellor of the Pontifical Academy of Sciences, which advises Francis on scientific matters and co-sponsored the meeting. The statement says that human-induced climate change is “a scientific reality”, and that humanity has “a moral and religious imperative” to mitigate it. It also argues that politicians have a special responsibility to ensure the success of the Paris climate negotiations while protecting the poor and the vulnerable.

The gathering also stirred up controversy. The Heartland Institute, a free-market think tank in Chicago, Illinois, organized a rival meeting in a hotel just outside the Vatican walls. The group wants to dissuade Francis “from lending his moral authority to the politicized and unscientific climate agenda of the United Nations”, it said in its advertising materials.