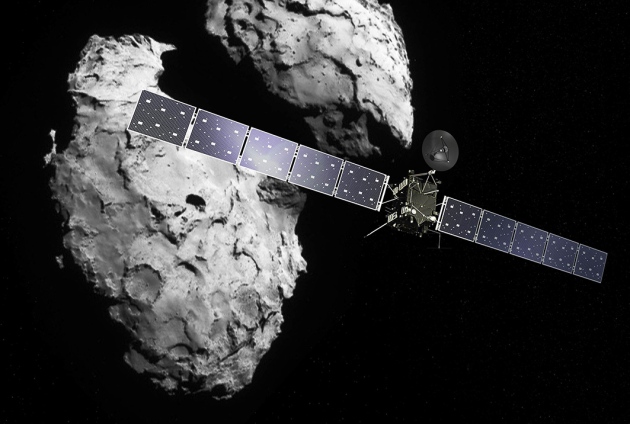 Artist’s impression of the Rosetta orbiter approaching the comet 67P/Churyumov-Gerasimenko.

A year since a probe called Philae made history by touching down on a comet, the team that pulled off the feat is plotting a different kind of landing. Next September, the European Space Agency will crash Philae’s mothership Rosetta into the icy dust ball, but as gently as possible.

The dramatic act will bring the mission to an abrupt end — and give Rosetta’s wealth of sensors and instruments their closest view of the comet yet. “The crash landing gives us the best scientific end-of-mission that we can hope for,” says Rosetta project scientist Matt Taylor.

The collision will be emotional for the scientists, some of whom have worked on the mission since its inception in 1993. “There will be a lot of tears,” says Taylor.

Launched in 2004, the Rosetta orbiter caught up with the comet 67P/Churyumov-Gerasimenko ten years later as the rock was travelling from deep in space towards the Sun — and dropped Philae onto the surface a few months later, on 12 November. Scientists have not heard from Philae since July, and don’t know if they will do so again, but Rosetta’s operations to survey the comet from orbit are in full swing. However, the orbiter can’t keep up this work indefinitely. Funding for the mission runs out in September 2016 — and by that time 67P/Churyumov-Gerasimenko will be well on its way back out into deep space, where the solar-powered orbiter will receive too little sunlight to function.

Discussions about what to do with Rosetta when that happens have continued for more than a year. Rosetta flight director Andrea Accomazzo says that, ideally, Rosetta would hibernate while the comet remains in deep space, then be resurrected when 67P again approaches the Sun in 4 or 5 years’ time. But the cold of deep space would probably damage the craft, Accomazzo says; others fear that fuel and other resources would run out. Moreover, many of the mission’s principal investigators (PIs) began their work more than 20 years ago and “there’s no point putting an old experiment with old PIs into hibernation”, jokes Kathrin Altwegg, a planetary scientist at the University of Bern.

Crash-landing Rosetta emerged as the preferred option last year, but only now are orbiter navigators and operators working out how to go about it. Rosetta’s closest encounter with the comet so far was from 8 kilometres above the surface, when it dispatched Philae. The current thinking sees Rosetta spiral down to a similar distance next August before creeping ever closer in elliptical orbits and crashing in September, says mission manager Patrick Martin — but that could still change.

Although Philae sent back some data during its descent, Rosetta has more powerful — and more varied — sensors and instruments. The orbiter will also descend much more slowly than Philae did, allowing it to gather more data and better pictures. Once it gets to 4 kilometres, for example, Rosetta should be able to distinguish between the gases emerging from each of the duck-shaped comet’s two lobes to determine whether the regions vary in composition, says Altwegg, who leads the team behind ROSINA (the Rosetta Orbiter Spectrometer for Ion and Neutral Analysis). That could shed light on the environments in which each was formed.

Rosetta’s cameras will get their best-resolution shots of the comet’s surface yet — less than 1 centimetre per pixel once the craft is within 500 metres of the surface, adds Holger Sierks, PI for Rosetta’s OSIRIS (Optical, Spectroscopic, and Infrared Remote Imaging System). This will allow researchers to look at surface properties and link these to comet activity that Rosetta has observed from orbit.

How far into the descent Rosetta will be able to send data back to mission control will depend on whether engineers can design the final trajectory such that the craft crashes on the side of the comet that faces Earth. Navigating while close to the comet will be difficult because the body’s gravitational field is uneven, but spacecraft-operations manager Sylvain Lodiot hopes that the orbiter will transmit until the very end.

The crash will definitely be a hard stop to the mission, he says, however gentle the landing. Designed to manoeuvre in orbit, once Rosetta is on the comet’s surface it will no longer be able to point its antenna to communicate with Earth. Similarly, it will not be able to angle its solar array, so it will lose power, says Lodiot. “Once we touch, hit or crash, whatever you want to call it, it’s game over.”

Before then, though, the mission still has much to accomplish. As the comet approached the Sun, it heated up, with vaporizing ice causing more and more gas and dust to stream from its surface. Rosetta had to retreat into a wider orbit to stop the dust from confusing its navigation system. But now that the comet is speeding away from the Sun, mission scientists are relishing the opportunity to steer Rosetta back in. Priorities will then be to get images that would enable comparisons of the comet before and after its swing around the Sun, as well as a close-up of the southern hemisphere, which was largely in darkness until May and will disappear back out of view in March.

Rosetta will also resume listening out for Philae. Given the huge public interest in anything to do with the lander, Rosetta’s finale will make for a fitting end to the story, adds Altwegg. “This way Rosetta gets to live happily ever after on the comet with Philae.”