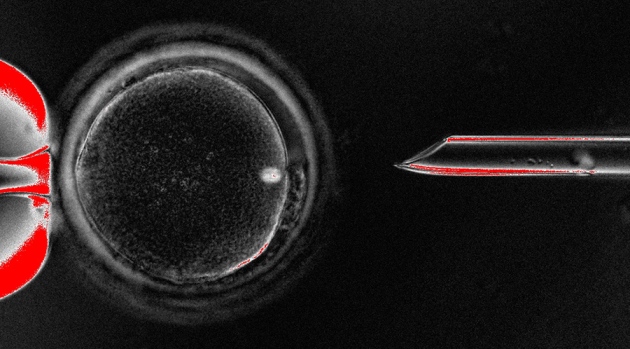 A pipette poised to pull the nuclear genetic material from an unfertilized egg — a step in mitochondrial-replacement therapy.

Britain’s fertility regulator has decided to allow the birth of babies from embryos modified to contain three people’s DNA in “certain, specific cases” — making the United Kingdom the first country to explicitly permit the therapy.

On 15 December, the UK Human Fertilisation and Embryology Authority (HFEA) announced that it would allow clinics to apply for licences to conduct limited trials of the technique, which aims to prevent mothers from passing down mutations in cellular structures called mitochondria. Last month, the HFEA’s scientific advisory board recommended that trials go ahead.

“Today’s historic decision means that parents at very high risk of having a child with a life-threatening mitochondrial disease may soon have the chance of a healthy, genetically related child. This is life-changing for those families,” said HFEA chair Sally Cheshire, in a press statement.

Researchers at Newcastle University and the Newcastle Fertility Centre have already said that they will apply for a licence to carry out the procedure. Called mitochondrial-replacement therapy, it involves exchanging faulty mitochondria for healthy ones — by transferring the nuclear DNA from one egg (or just-fertilized embryo) into another donor egg (or embryo). Doug Turnbull, director of the Wellcome Trust Centre for Mitochondrial Research at Newcastle University, says that “up to 25” selected patients could be treated at Newcastle with the therapy each year.

However, the United Kingdom will not be the first country in which the therapy has been used. Fertility doctors said this year that they had already performed the procedure in Mexico and Ukraine, which do not have laws preventing it. John Zhang, a physician at New Hope Fertility Center in New York City, has said that a baby boy conceived from the treatment in Mexico seems healthy so far.

Research suggests that the treatment may not always be 100% effective. Clinicians say it is hard to prevent a few mutant mitochondria being transferred along with the nuclear genome into the donor egg — and tests on embryos suggest that in some cases, these faulty mitochondria can out-compete the healthy ones1.

The HFEA will approve each use on a case-by-case basis, it says. Last month, an HFEA spokesperson estimated that the United Kingdom’s first child with three people’s DNA could be conceived as early as March or April 2017.