When the Congo River in central Africa formed, a group of apes was forever stranded on its southern banks. Two million years later, the descendants of these apes — the bonobos — have developed distinct social patterns. Unlike their chimpanzee relatives on the northern shore, they shun violent male dominance and instead forge bonds through food-sharing, play and casual sex. 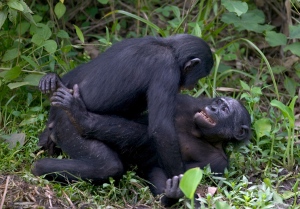 An 18-year-old female named Ulindi has now become the first bonobo (Pan paniscus) to have its genome sequenced. Scientists hope that the information gleaned will explain the stark behavioural differences between bonobos and common chimpanzees (Pan troglodytes) and help to identify the genetic changes that set humans apart from other apes.

The genome is published today in Nature1. The bonobo is the last extant species of great ape to receive the sequencer's attentions, following humans (Homo sapiens)2, 3, chimps4, orang-utans (Pongo pygmaeus and Pongo abelii)5 and gorillas (Gorilla gorilla and Gorilla beringei)6.

Little and probably no interbreeding has occurred since then, says Kay Prüfer, a bioinformatician at the Max Planck Institute for Evolutionary Anthropology in Leipzig, Germany, who led the sequencing study. Comparisons of the bonobo genome and sequences of chimps from various populations showed that chimps living just across the Congo River were no more closely related to bonobos than were populations living as far away as Côte d’Ivoire. That implies that the separation was quick and permanent, says Prüfer.

Once the ancestors of bonobos had been separated from those of chimpanzees, they may have found themselves in a very different ecological world. North of the Congo River, the ranges of chimpanzees and gorillas overlap, so those animals compete for food. But no gorillas live south of the river, so bonobos face much less food competition, says Victoria Wobber, a comparative psychologist at Harvard University in Cambridge, Massachusetts, who has worked with bonobos including Ulindi.

In the absence of competition, the ancestors of bonobos may have been free to forage a wider range of foods in large groups, and share the spoils freely. “When food is more consistently available, a lot of the aggression you see in chimps, you don’t need anymore,” says Wobber.

Bonobos also treat sex as casually as a handshake, earning them the nickname ‘hippie chimps’. The sex is often non-procreative and can occur between pairs of the same sex. Chimps tend to have sex only when females are in estrous. “Instead of resolving their disputes aggressively, maybe they’re resolving them with sex,” says Wobber. And whereas chimpanzee groups are dominated by hyper-aggressive males, bonobo groups are less hierarchical and are often headed by females.

Genetic discrepancies between chimps and bonobos must be involved in these behavioural differences, says Prüfer. But identifying which genetic changes are involved and how they influence behaviour will take time.

As a start, Prüfer’s team identified regions of the bonobo genome that differ from those of chimps and that may have evolved in bonobos since the split. Many of these regions contain no genes, while the genomic region that seems to have evolved the fastest in bonobos encodes a microRNA molecule that probably regulates the activity of as-yet unidentified genes.

Prüfer is not dispirited by those results. Any behaviour is influenced by hundreds or even thousands of genes, not one or a handful. “The chance that you flip one trigger and suddenly you’re a bonobo, I don’t think that will happen,” he says.

By chance, 1.6% of the human genome is more closely related to the bonobo genome than to the chimp genetic code. Knowing which parts of the human genome are shared with other primates can help scientists to work out which bits are not, and identify the sequences that make us unique among apes. “The real benefit of the bonobo genome is being able to narrow down the list,” says Ajit Varki, a biochemist at the University of California, San Diego.

However, the sequence of a single bonobo is not enough, says Varki. Other bonobos may share different genomic regions with humans, and these genes would be missed by relying on a single bonobo sequence. Varki says that researchers are planning to sequence the genomes of dozens more bonobos, chimps and gorillas to fill the gaps.

And Ulindi may not be representative of most bonobos in behaviour, either. Wobber has noticed vast behavioural differences in her work with bonobos, and says that the genomic model of the hippie chimp isn’t a peacenik. Ulindi sometimes lashed out at Wobber. “She’s just a mean bonobo. That’s my own personal experience with her,” says Wobber. “I might have picked a different one to sample.”