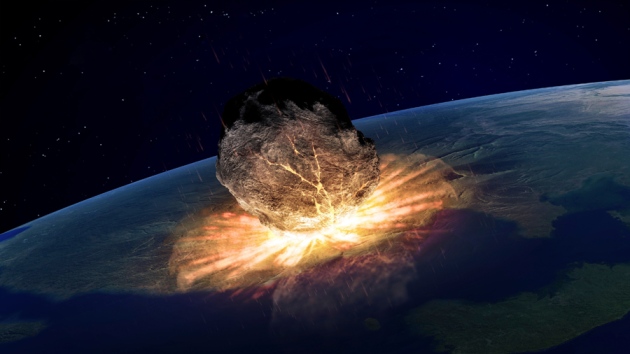 A pair of potential impact craters in Australia's Warburton Basin are each roughly 200 kilometres across.

Each measuring 200 kilometres across, two mysterious natural structures buried deep in central Australia could be some of the world’s biggest impact craters, a team of Australian geologists says.

The work is likely to be controversial. Researchers have a hard enough time confirming impact craters at Earth’s surface, much less those buried beneath 3 kilometres of sediment.

But in a paper published this month in Tectonophysics1, the scientists say that they have several kinds of evidence suggesting the Australian structures were formed during a meteorite smash — or two.

“I’m sure there will be a lot of people raising eyebrows,” says Andrew Glikson, a geologist at the Australian National University in Canberra and leader of the research team. “But I think we have a major body of evidence for an impact origin.”

The structures appear in the Warburton Basin, near the border between South Australia and the Northern Territory, where geologists have long hunted for oil and gas as well as geothermal resources. Those data have yielded a wealth of information about what is buried beneath the surface. Seismic studies have hinted that something is deforming the crust beneath the eastern and western Warburton Basin. Gravity and magnetic studies also suggest some kind of buried structure.

A question of quartz

But the impact argument mostly relies on quartz grains discovered in cores drilled deep into the basin during oil and gas exploration. Seen under a microscope, the grains are marked by clusters of lines — some of these are parallel and mostly straight, and others are wavy and wiggly. To Glikson’s team, these represent fractures that were created during the colossal shock of a meteorite impact.

Yet to Christian Koeberl, an impact expert at the Natural History Museum in Vienna, the quartz lines are less compelling. Most of the photographs in the latest paper do not show the true parallel fractures formed during a meteorite impact, he says. Koeberl is also not convinced by the seismic and gravity anomalies, which he says do not resemble those at other impact structures around the world. Looking at all the evidence for a Warburton Basin impact, “the soup is way too thin,” he says.

Glikson disagrees. “I would not have submitted it to a peer-reviewed journal if I didn’t think it was convincing,” he says. His biggest question is how old these structures might be. The surrounding rocks date back to about 300 million to 420 million years ago, so the impact — if it happened — is probably at least that old, Glikson says.

Another question is whether and how the two structures in the Warburton Basin might be related. Both are about 200 kilometres across, as seen in the seismic and gravity data. The potential impact craters might have formed at the same time ― perhaps by two pieces of the same incoming meteorite ― or in separate events.

Gordon Osinski, a planetary geologist at the University of Western Ontario in London, Canada, notes that such an impact would have been roughly twice as large as the meteorite smash that created Mexico's Chicxulub crater 66 million years ago. That event, which helped contribute to the extinction of the dinosaurs, was so devastating that geological traces of it can be found around the planet. So far, no such evidence has been found for anything that could link back to any Warburton impact.

Other possibilities for the Warburton structures, not linked to a meteorite impact, include some kind of magmatic or tectonic activity.

The biggest confirmed impact site on Earth is the Vredefort structure in South Africa, which is about 300 kilometres wide and dates back about 2 billion years.